The Israeli Shekel has gained roughly 6% since mid-January. The Shekel has also been more resilient than other currencies when the dollar was gaining, and it has been performing well even when the dollar was weakening. All the while, Israel has been plagued with continual deflation, which is a classic case for unconventional measures. The Bank of Israel responded by slashing its benchmark interest rates to 0.1%. However, no “unconventional” measures were taken; no quantitative easing and no negative interest rates.

Investors, both local and foreign, reacted as they have in similar cases. That is by buying government bonds. Israeli government bonds yield 1.8% and in real terms, yield 2.5%, because Israel’s annual inflation rate is at a negative -0.7%. And with the demand for Israeli bonds high, the Israeli Shekel has strengthened as well, and so the cycle continues.

If this vicious cycle seems remarkably familiar, you are not mistaken. Israel is experiencing a very similar phenomenon to Japan and its vicious cycle. And just like Japan, this cycle is unsustainable.

Israeli Exports (excluding airplanes, ships, and diamonds), have taken a nose dive. That can be seen clearly in the chart below, from $4.3Bln of monthly exports in the beginning of 2015 to less than $3.5 in exports in March 2015. The trade deficit hasn’t been immune either, as it has also been surging from a marginal $130M a month to north of $1Bln. 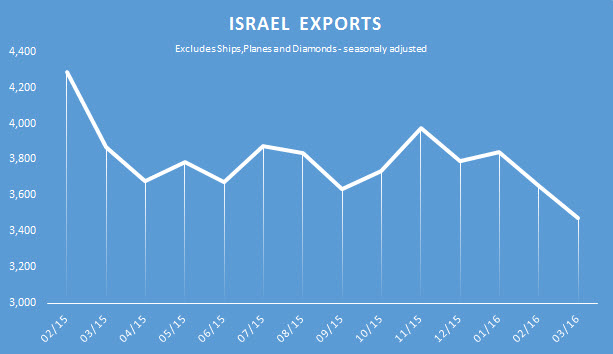 Chart courtesy of The Bank of Israel

So why is the Bank of Israel not acting? Two factors are in play.

The first reason is that Israel’s consumers are still resilient. Israel’s job market has been holding well with unemployment steady at 5.3% which has left consumers feeling confident. As a result, private spending rose by 4.5% in 2015.

The second reason is Israel’s housing market which is still boiling, with housing prices rising by 7.2% from February 2015 until February 2016.

Both factors led the Bank of Israel to be more patient with unconventional measures. Consumer spending, as the Bank of Israel sees it, may suggest inflation is recovering, and an overheated housing market combined with negative interest rates might be risky.

Yet both factors are not sustainable. The Israeli job market will not be able to maintain high levels of employment if exports keep plunging at the same pace. And that means consumers’ confidence will be hurt.

When it comes to housing, Israel’s so-called “boiling” housing market might soon be cooling off. Apartments inventories hit a multi-year record of 29,600 while demand stayed flat with an average of 2,300 apartments bought in a month. Even the Bank of Israel official statement reiterates that demand is not enough to lower housing inventories.

Of course, the Bank of Israel might eventually be forced to pair its efforts with other central banks and tackle the “Japanisation” of the Israeli Shekel with unconventional measures. But until that happens the most likely scenario is that Israel’s interest rates will stay lower for longer, trailing that of the US for a long while.

That means that, just like the USDJPY, in the USDILS, the USD will take the lead. Any improvement in the US economy and inflation, which will bring the Fed closer to another rate hike, will generate even more bullish momentum. That momentum could be sustainable for longer than before in the USDILS trade. But when things in the US turn slightly softer (as they are at the moment), the Shekel, just like the Yen, could regain some lost ground. But, also like the Japanese Yen, the Shekel’s strength won’t be sustainable.