A little more than a week ago, China released its data for second quarter GDP growth alongside other important data sets that, entwined, give us a glimpse into the health of the world’s second largest economy and a framework for FX strategy in the Asian space.

China’s second quarter GDP growth hit 6.7% for the second quarter year-on-year, the same growth rate as the first quarter and moderately higher than the 6.6% called for in Reuters’ consensus poll. The major contributor to GDP growth was consumption, a rather positive sign that consumers are becoming a more prominent engine in the Chinese economy. This was further enforced when China’s retail sales posted growth of 10.6% in June compared to 10.0% in May.

But on the flip side, there were some negative signs as well, and plenty of them. GDP growth was, indeed, driven by consumption but the growth in the services sector, or the tertiary industry as it is referred to, was 7.6% Year on Year. That is simply not enough to accommodate China’s weakness in manufacturing and not exactly in line with China’s growth plans.

China’s private investment in fixed assets, an important gauge of future growth, slowed to 2.8% year-on-year for the first six months of 2016. Among the weakest sectors were mining and manufacturing, both of which are important to Chinese growth. Perhaps more worrisome, growth in construction investment was merely 1.9%, raising a red flag that, perhaps, China’s real estate recovery is losing steam. 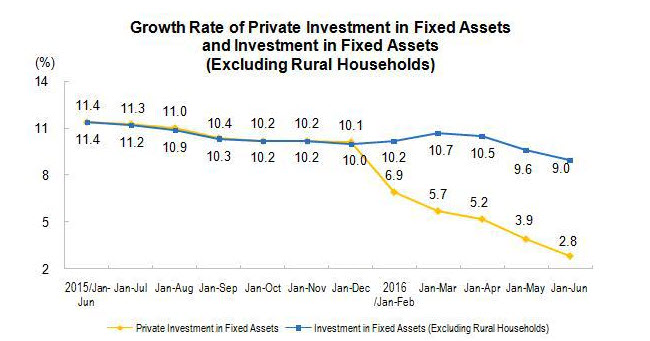 Chart courtesy of National Bureau of Statistics of China

China’s economy is still in a rebalance mode and that means that the only thing we can expect, for now, is a continual gradual shift and a soft slowdown year by year. Thus far, neither the services sector nor consumption is strong enough to lift growth for other sectors without Beijing’s support. And because the momentum in consumption isn’t enough, it means that besides consumption, most other sectors, chiefly mining and manufacturing, will continue to weigh on China’s economic performance and will continue to muddle through until their excess capacity, left from the good times, is adjusted.

Implications On The FX Space

The implications on the FX arena should be viewed in two tiers. The first is, of course, the Yuan. With continuous weakness in most of China’s sectors, China’s policy makers are likely to allow the Yuan to drift lower towards the 6.89 level.

The second tier is the implication on currencies with a direct link to China, notably the Aussie and the Kiwi. As China’s mining and manufacturing sectors continue to muddle along, Australia’s and New Zealand’s commodity exports to China will remain weak. Both countries will have to rely more and more on private consumption. The problem is when we examine the growth in their respective retail sales (in the chart below) we can see a significant deceleration in retail sales growth from the peak in 2014-2015. That means that the only growth engine that New Zealand and Australia can count on is slowing and, consequently, interest rates in both countries will also have to remain low. And that leaves more room for downside for both the Aussie and the Kiwi against the Dollar in the immediate future.