The Fed’s June rate decision is coming up this week and the consensus bets are overwhelmingly tilting towards a rate hike. According to the CBOE Fed Funds rate probability chart, the probability the Fed will raise rates at the next meeting is 91.3%. Thus, suggesting that market participants are almost certain a rate hike is coming. Furthermore, there is also growing consensus that the Fed will also start trimming its balance sheet as early September. However, a deep dive into the mechanics of the US economy suggests that the Fed should ignore the consensus, and even its own outlook, and take a step back from tightening. And it all starts with the puzzling discrepancy between inflation and housing prices.

Upon the surface, the latest fall in the US Core inflation rate, from 2.3%, four months ago to 1.9%, and the latest surge in US housing prices (as reflected by the Case-Shiller Index) present a somewhat puzzling divergence between the US inflation outlook and housing prices. Nonetheless, those two contradicting developments are closely intertwined, both to each other and to the Fed’s monetary policy. And, to illustrate the link between the two, we must dive into the US Treasury market. 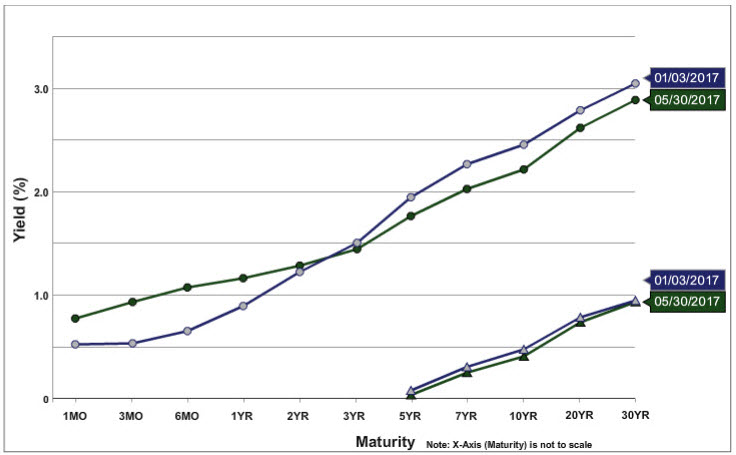 Chart courtesy of US Department of Treasury

This, of course, is a direct consequence of monetary tightening; the Fed’s tightening bias pushed short- term yields higher and long-term yields lower. This change of lower short-term yields and higher longer yields has directly impacted the credit patterns of the US consumer. The 10-year yield, which has the greatest impact on mortgage borrowing rates, has fallen from 2.45% to 2.21%. Thus, the fall in longer term rates effectively made mortgages cheaper for the US consumer. All the while, the rise of short-term rates has made short-term credit, primarily through credit cards, more expensive for the consumer. And this, of course, has a direct impact on how the US consumer behaves. As mortgages become cheaper and credit cards become more expensive the consumer is leaning towards longer term purchases of homes at the expense of short-term consumption.

The chart below, for example, illustrates the Debt Service Ratio; that is the ratio of income that goes specifically to pay off debt. When we compare the debt service ratio of mortgage loans to consumer debt we can see that mortgage payments, as a ratio of income, is falling, thus making it easier for the consumers to pay the mortgage. At the same time, the service ratio of consumer debt is rising, meaning credit cards loans are becoming more expensive for the consumer to pay. 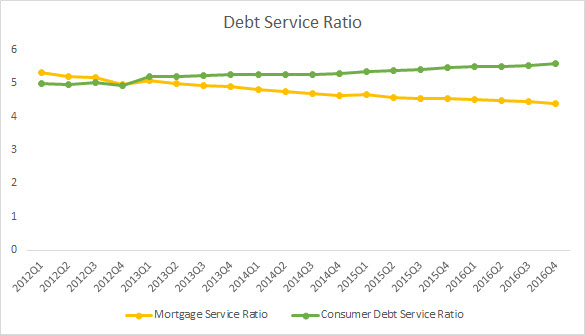 Now, if demand for US housing were weak, then perhaps another hike in interest rates to make mortgages cheaper (though counter-intuitive) would be beneficial. But, home inventories are close to a record low, pointing to high demand, and the US S&P Case-Shiller National Home Price Index is surpassing its 2006 peak. Given that, there is no doubt that the US Housing market is experiencing strong momentum.

Chart courtesy of The Federal Reserve of St.Louis

And all the while, as a result of a sharp fall in revolving consumer credit (i.e. credit cards and consumer loans), US core inflation has markedly slowed to 1.9%. Another round of Fed tightening and this dynamic, of weaker consumer credit demand and stronger housing demand, will be amplified, potentially taking the US core inflation even lower and risking the Fed’s 2% inflation target. But, if the Fed surprises and takes it easy on the tightening pedal, inflation will bounce back and consumer loans credit card and mortgages, will be more balanced. However, if the Fed decides to go with the consensus and press forward with a rate hike, brace yourself, as inflation could cool even further, and jeopardize US long-term growth

5 thoughts on “Time For The Fed To Take It Easy”