A new and innovative business model is emerging in Canada’s cannabis industry. Not only is it a potentially safer way to invest in the highly volatile cannabis sector, it could also be more profitable than investing in individual cannabis companies.

No, it’s not an ETF or a mutual fund. It’s something called streaming – let me explain.

Cannabis Wheaton Income Corp.(CDNX:CBW) is a young Canadian cannabis company headquartered in Vancouver that just went public in early May.

CBW is pioneering a new and innovative business model in Canada’s cannabis industry known as streaming.

Streaming means providing funding to cannabis companies to help them build and expand operations in exchange for an equity stake and a portion of the cultivation production.

Today, CBW is taking the streaming model and applying it to the cannabis industry.

Similar to Invictus, CBW is a diversified play on the broader Canadian cannabis sector, providing shareholders with leverage to a basket of cannabis companies as opposed to just one.

Cannabis Wheaton has been quick to deploy tens of millions in capital into some of the most promising cannabis companies in Canada.

When CBW went public on May 8 it revealed that it had already entered into agreements with 14 streaming partners in 6 provinces across Canada. 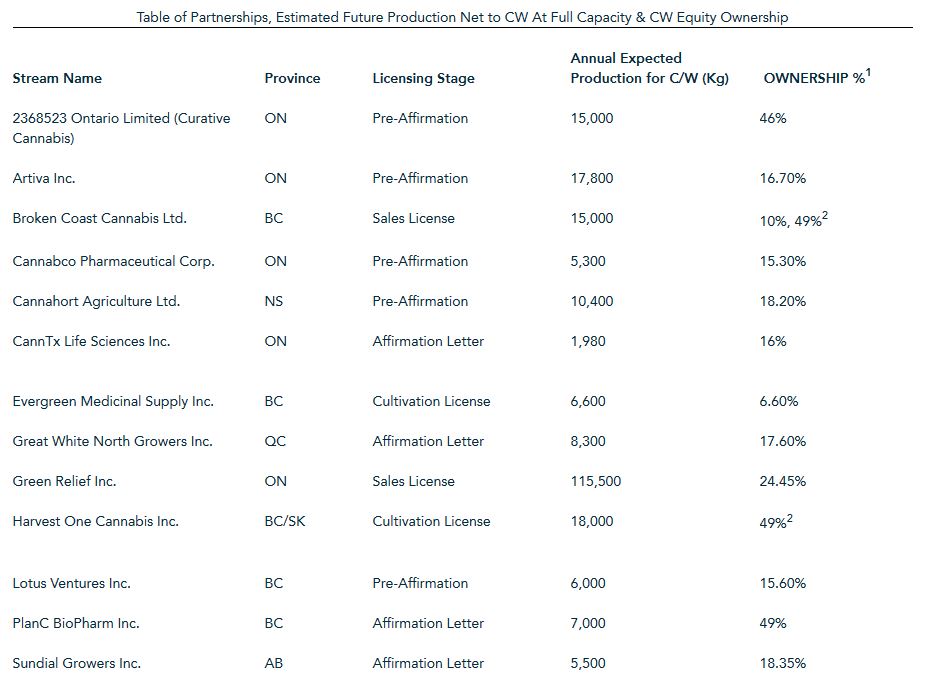 At the time of the disclosure CBW’s streaming agreements included future capacity of 1.3 million square feet of cannabis cultivation and production capacity net to Cannabis Wheaton by the end of 2019.

Since its fast start, CBW has kept its foot on the pedal, aggressively expanding its portfolio of streaming partners.

On May 29 CBW announced it had reached a deal to invest $30 million into Abcann Global (CDNX:ABCN) to help with current operations and an expansion project to ramp production capacity at one of its greenhouses to 130,000 square feet.

Pending a few conditions CBW also committed to fully fund an additional 50,000 square feet of production capacy that would be split evenly between the CBW and Abcann.

ABcann will be the sixth licensed producer in Cannabis Wheaton’s portfolio but it will be the first publicly traded company with a sales license.

CBW expects this partnership to eventually to provide it with an estimate 8 million grams of cannabis per year.

Despite an already impressive portfolio of high-growth cannabis company investments, CBW is tapping into the capital markets to stuff its balance sheet with cash that it will use to more deals.

Last month CBW announced it had closed a private offering of shares for gross proceeds of $50 million.

This huge injection of cash will be used to finance the Company’s streaming partners and for general corporate and working capital purposes.

Shifting into the income statement, CBW doesn’t really have any revenue right now. But that’s OK. As you can see the company is making big moves to cash in on the high-growth cannabis sector. If the cannabis companies in its portfolio do well, and I absolutely expect them to, CBW will be flush with revenue.

CBW’s innovative business model and string of deals have not gone unnoticed. Its rising profile enabled it to land one of the most sought after grow masters in Canada.

Last month CBW announced Kevin Furet would take the position of Chief Cultivation and Genetics Officer on September 1, 2017 in order to comply with certain pre-existing contractual obligations. Here’s a clip from the press release.

“Until May 2017, Kevin served as the Master Grower for Canopy Growth Corporation and brings more than 17 years of production technique, plant breeding and strain development experience to his new role with Cannabis Wheaton.

At Canopy Growth Corporation Kevin oversaw cultivation for Tweed, Tweed Farms and Mettrum. While with Tweed, Kevin also served as their first Master Breeder, where he led a team of researchers in the creation of their cannabis breeding facility, the first of its kind in Canada and the foundation for Tweed’s Canadian-bred genetics.

In his role at Cannabis Wheaton, Kevin will be working with the Company’s partners to provide solutions for optimizing top quality growth and yields as well as consulting on the daily issues that affect licensed producers, including bringing his expertise on breeding and genetics.”

Cannabis Wheaton has Been Crushed on the Chart

Cannabis stocks are funny. Cannabis Wheaton has a great story and tons of potential. However, shares are down about 50% since going public in early May. Take a look below. 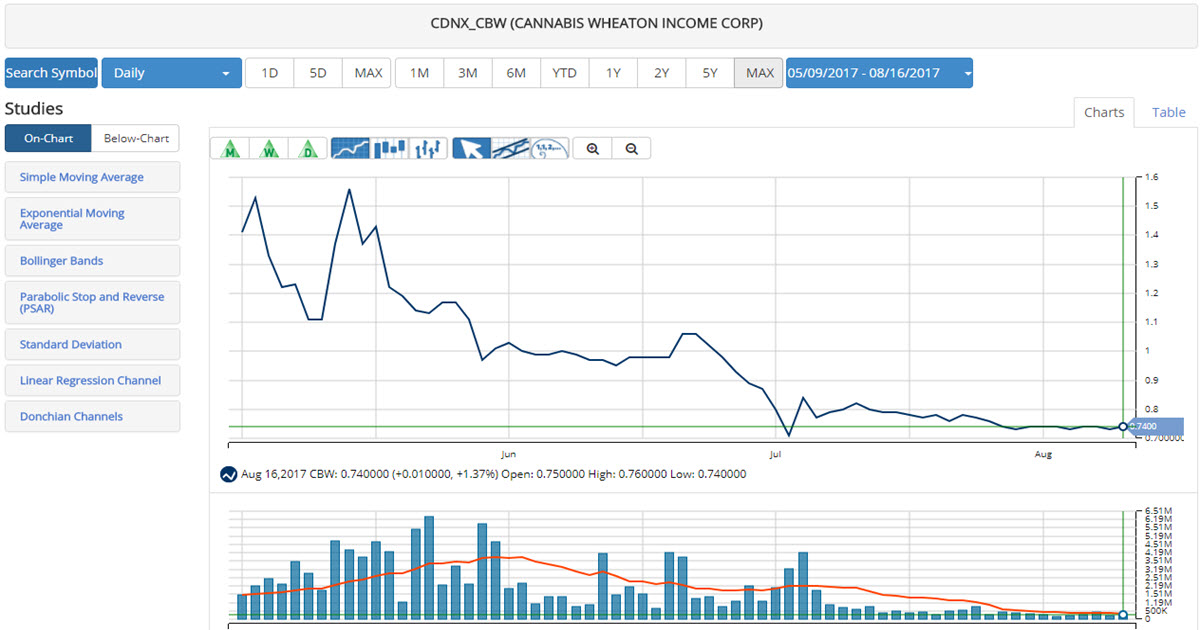 What’s going on here? I don’t think this weakness is company specific. Number one the entire cannabis sector just went through a brutal bear market. And number two, new companies on the exchanges simply haven’t been in favor with investors. Instead, investors have favored larger companies that have been trading for a few years.

The Big Picture on Cannabis Wheaton

I dig this company. It’s a diversified play on the high-growth Canadian cannabis sector. It kind of reminds me of an ETF. This big dip could be a chance to buy low while this company is out of favor. In the long run, I see plenty of potential up side.

One thought on “This Cannabis Innovator Is Down 50% In Two Months - Time to Buy?”