Growing revenue by more than 100% for 11 consecutive quarters is no small accomplishment.

A statistic like that immediately tells me two things about a company.

Number one, it is operating in a high-growth industry.

Number two, it is doing a great job of capturing that growth.

These are the reasons I'm excited about the little-known cannabis stock I am going to share today.

That's a pretty ridiculous streak - I haven't seen anything like it even in the high-growth cannabis industry.

MariMed Inc. (NASDAQ:MRMD) is a consulting firm that specializes in funding, designing, building, and operating cannabis greenhouses and dispensaries.

This is a US based cannabis company, with headquarters in Newton, Massachusetts. 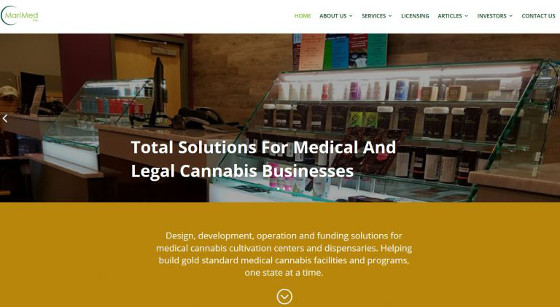 MariMed has been around for a few years. But in July it consolidated two businesses, updated its name and ticker and decided to focus exclusively on the cannabis industry.

Shares trade in US OTC markets under the ticker symbol MariMed Inc. (NASDAQ:MRMD).

Trading volume is a little light but still decent. I see average daily trading volume of 27,400 shares. With a share price of $.48, that means around $50,000 worth of shares trade hands every day. Not exactly liquid enough for a million dollar trade but plenty for most investing a few thousand here and there.

Marimed Is Cashing In On The High-Growth Cannabis Industry

MariMed Inc. (NASDAQ:MRMD) is a broad play on the US cannabis industry. And with the North American cannabis industry booming MariMed has been scooping up tons of new deals and revenue growth.

MariMed was hired to draft the application to win this cannabis cultivation license, developed the facility and has been retained to manage all its operations.

MariMed will train and manage the staff and provide HR, payroll, compliance, and reporting.

As you can see, MariMed plays a critical role helping its clients get up and running in the cannabis industry.

Marimed Is Raising Millions In Capital To Fuel More Growth

Also in late June Marimed announced it had raised $5.15 million to fund development and expansion of client medical cannabis facilities in Maryland and Delaware and marketing of MariMed's Kalm Fusion line of precision dosed cannabis products into additional states.

Today, this cash is already being put to work.

MariMed has six additional facilities under development in two other states.

After successfully executing a string of projects in the last 12 months, revenue has been surging.

With all these new deals: sales are booming: And with legal cannabis ranking as the fastest growing industry in North America, MariMed has been killing it.

MariMed Inc. (NASDAQ:MRMD) got my attention because of an incredible statistic. This company has grown revenue by at least 100% in the last 11 quarters.

With six more big deals in the make and a growing pipeline of demand - I am expecting more revenue growth here.

Shares jumped higher in May when it announced the new business model and name. Since then shares have fallen 45% - within 25% of the 52-week low.

Take a look below.

I am seeing support developing right here on the chart between $0.45 to $0.50. If shares can catch a bid in this area it could be the beginning of a longer-term reversal back to the 52-week high.

Despite some weakness in its share price MariMed still has a market value of $77 million.

That's a lot smaller than some of the Canadian players like Canopy and Aphria - but within the US cannabis sector, it's probably mid-range.

That means MariMed has a forward price to sales ratio around 10.

That would be considered high in the S&P 500. But in light of MariMed's revenue growth, I don't see a P/S ratio of 10 as unreasonable.

MariMed Inc. (NASDAQ:MRMD) is a broad play on the US cannabis sector and specifically greenhouses and dispensaries. The company has been delivering ridiculous revenue growth - I'm impressed with the numbers. Valuation looks a little high - but I do see plenty of revenue growth ahead. I view MariMmed as a peripheral holding in a diversified cannabis portfolio.