Anyone trading the stock of BlackBerry (NASDAQ:BBRY), formally known as Research In Motion, knows that this stock has had its ups and downs over the years. Just lately, it seems like it has been one challenge after another for this once high riding company. 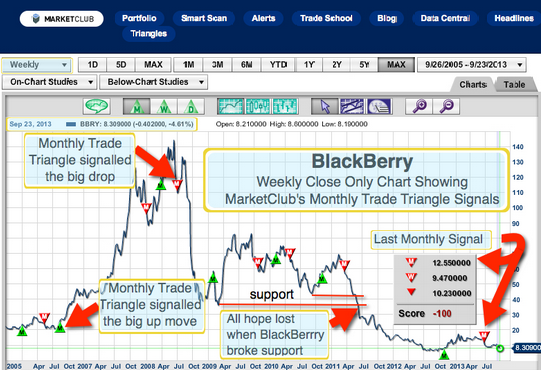 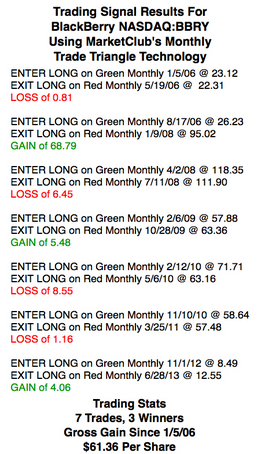 simply text, receive emails or make phone calls. In other words, they completely missed the app market. These tiny little apps became giant killers and killed off the likes of Nokia and Motorola. Apps are what propelled both Apple and Android to prominence in the last several years. Unfortunately for BlackBerry, they got into the game too late. With only about 100,000 apps, they have only a fraction of what Apple and Android now offer on their smartphones.

I'm going to show you how using one of our simple Trade Triangles could have helped you make money in BlackBerry and helped you avoid disasters like last Friday in this stock.

Our monthly Trade Triangles pretty much nailed BlackBerry at all of its major turning points, as you can see on the chart. Trading is not just about making winning trades, but also protecting your portfolio during dramatic downturns in a market. Our Trade Triangle technology can help you do both. This has been particularly true in stocks like Apple (NASDAQ:AAPL), Netflix (NASDAQ:NFLX), Tesla (NASDAQ:TSLA), Facebook (NASDAQ:FB) and stocks that have seen similar big up and down moves.

You can check out your favorite stocks here and see just how they worked out.

Please leave a comment or your thoughts on the blog, we would love to hear from you.