One on the really great things about working at INO.com and MarketClub, is I get to work with some very smart and outstanding people.

I invited Bob Fladung, now our Director of Advertising, to join our company on July 5th, 2000 and he has been with our company for over 13 years. Even though he had no previous online experience, I felt Bob would be a great addition to our growing company. Because of his fine work, by September 10th, 2001 Bob was promoted to our fast growing advertising department. Little did any of us know what was going to happen the next day. It was a tragedy first and foremost for the families who lost loved ones in that terrible terrorist attack.

Little did Bob know at the time, but the advertising market came to a screeching halt. Bob did not complain as he watched his income get cut in half, nor did he point a finger at others, he simply worked harder and did not let up until revenues were once again growing at a nice clip. Bob is a special guy in our company and an outstanding human being.

Just recently, Bob took part in "Ride2Recovery" - an organization that was founded to enhance the lives of our country's wounded veterans with Mental and Physical Rehabilitation Programs featuring cycling as the core activity. 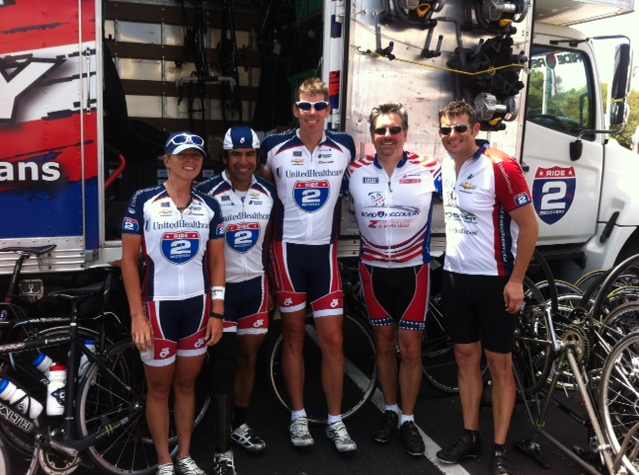 That's Bob in the far right of the picture with some of his fellow riders.

This is what Bob shared with me about his "Ride2Recovery" experience.

Having the opportunity to ride with these hero's was an amazing and inspirational experience... one that I'll never forget. I'm awed at the perseverance of our military personnel.

Also, witnessing the outpouring of support from people we encountered along the ride was uplifting and emotional - elementary school kids lined up along the school fence, honking horns, flag waving, high fives, and cheering. It's hard to put in words, but something that I hope to do again in the very near future.

------------
This blog posting is a tribute to our military personnel. Everyone here at INO.com and MarketClub, salute you, for your outstanding character and the sacrifices you make to keep our country safe and protect our freedoms.

Adam Hewison
On behalf of everyone at INO.com and MarketClub.