The yield curve is flattening. I don’t cheer-lead a given view, but if I were to do that I’d be cheering for a yield curve flattener to put a correction to inflationist dogmatists quoting von Mises to the herds and otherwise sloganeering about inflation and a “commodity super cycle” (that term is pure promo).

Well, the curve is flattening.

Which means one of three things. END_OF_DOCUMENT_TOKEN_TO_BE_REPLACED

Inflation has permeated the macro markets; where to from here?

Apologies in advance for some of the possibly confusing content to follow. But if this were easy anyone could do it, eh? There are a lot of balls in the air; balls known as inflation vs. deflation and most of all time frames.

The media present inflation as this guy picking out higher-priced fruit. Wait till he gets to the meat department! You can click the graphic for the article at CNBC.

Meanwhile, the Biden administration’s Minister of (financial) Information, Janet Yellen, informs us that all that cost-pushed inflation about to be shoved into the economy is actually going to be anti-inflationary as it actually lowers some costs (in Wonderland anything is possible). END_OF_DOCUMENT_TOKEN_TO_BE_REPLACED

[edit] It’s probably best to read the article first and then circle back to this edit.

Upon completing the article I realized that no forward look at the economy and financial markets from an inflationary/deflationary point of view would be complete without consideration of the Yield Curve. Here is its status at the time of writing. It is making a steepening hint this week along with the rise in bond yields. That signaling is inflationary, at least for now. But in 2008 the curve morphed from an inflationary steepener to a deflationary one and that’s an important distinction.

You’ll notice that a blessed Goldilocks economy is mentioned below as a less favored option for 2022. She runs with a flattening curve like the one during the 2013-2019 phase. If it steepens forget about Goldilocks and prepare for either an inflationary or deflationary steepener.

We all know that the post-pandemic world is currently rife with supply bottlenecks and frustrated demand. We also know that the Federal Reserve and its fellow central banks sprang into heroic action (you know that is sarcasm) to fight the good fight against the dreaded liquidity event that came upon the macro markets and economies early in 2020. The combination of tight supply and printed money has obviously increased prices for materials, commodities, labor, and so on. END_OF_DOCUMENT_TOKEN_TO_BE_REPLACED

Our 30 year Treasury yield ‘Continuum’ chart indicates that deflation is the dominant trend, but…

“The crisis-monetisation cycle doesn’t end in deflation. The merest whiff of deflation just encourages central bankers and politicians to do more to boost prices. In fact, the occasional deflation scare is necessary to keep the cycle going. The cycle only ends when most voters see “inflation” as the biggest threat to their personal economic prospects.”

And over the course of decades now that is exactly the case. Every damn time that the public becomes terrified of declining asset (especially equity) prices the Fed springs into action. 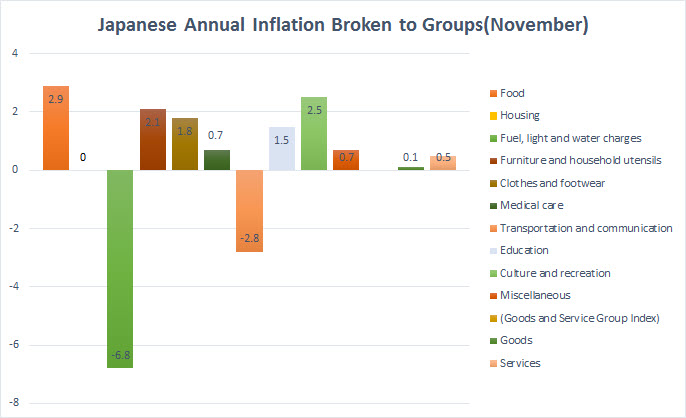 Let's take a quick look at the latest key data. November's inflation figure (annualized), albeit rather low, still wasn't the textbook definition of deflationary pressures. From a total of 10 various segments, from food to energy to housing, only transportation and energy fell on an annual basis while Housing prices were unchanged at 0%. Despite the dismal numbers, for deflation to be a risk, prices of most items need to fall. And as the chart below shows, that has yet to happen. END_OF_DOCUMENT_TOKEN_TO_BE_REPLACED