Today I asked the team from Psychology of the Call to open our eyes to an index that is often overlooked...or misunderstood as it relates to current or historic trends! I for one really didn't know too much about DJT and how it's been connected to our economic situation. Please enjoy the lesson and be sure and drop by Psychology Of The Call and tell them we sent you!

The Dow Jones Transportation (DJT) Index is a trusted leading economic indicator followed by wise men. The index was created by Mr. Charles Dow in 1884, a time when railroads were as important as today's internet superhighway, perhaps even more so. The index consisted of 11 stocks of which 9 were railroads, and all aboard have been derailed of late.

The deleveraging and divesting of every asset class in the cosmos has not been kind to the transport industry's equity holders, yet this sudden business shock may work to strengthen their business models as the world begins to dig itself out of this unprecedented trough.

Today's DJT is made up of 20 stocks of which only 4 are railroads: Burlington Northern (BNI), CSX Corp (CSX), Norfolk Southern (NSC), and Union Pacific (UNP). The other 16 stocks are airlines, trucking, and shipping.
http://en.wikipedia.org/wiki/Dow_Jones_Transportation_Average

Interestingly enough, today's talking heads insist on quoting the S&P 500 index as the best leading economic indicator, yet the DJT Index is 68 years its’ senior. That takes us back to just after President James A.. Garfield (R-20th) became the second U.S. President to be assassinated. The unfortunate event enabled Vice President Chester A. Arthur to take power.

Here's a maximum time frame chart that doesn't even go back to its beginning in 1884: 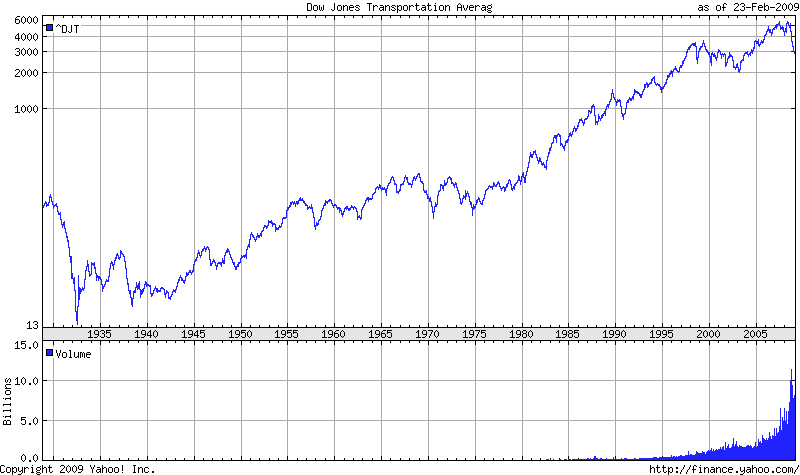 Since corporate financial officers (CFO) are always striving to lower costs, many today would think their jobs have become easier since oil has fallen over $100/barrel, but that can't be further from the truth.

As CFOs experience this lower cost, the global economic slowdown is taking an even bigger toll on sales, share price, earnings per share, and margins. Profit margins at many of these companies are contracting due to desperate attempts to hedge what was a run-away oil market. Some airline CFOs stock piled crude supplies after it broke through $100/barrel, then $90/barrel, and so on. Thus the current price of sub $40/barrel has them miffed as global deleveraging is causing a domino effect of business contraction with the added burden of a higher crude cost supply glut in the short-term, yet not necessarily all are managed the same.

Even though the DJT's are a cyclical bunch, they usually signal an economic recovery before most other sectors since they must deliver raw materials from point A to point B. The raw materials are then utilized by manufacturers before eventually being sold at your Best Buy, WalMart, or Sears. The signals aren't looking too positive from a fundamental aspect of late since GDP and unemployment continue to suffer. The short-term technicals aren't giving us any bullish confirmations either. Notice  the DJT's dragging the S&P lower in this 3 month chart, foreshadowing a lower stock market ahead: 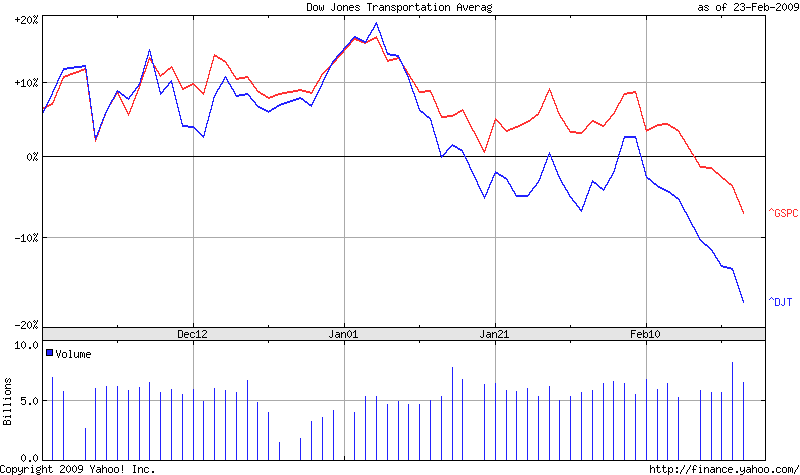 Since the DJT index is a corner stone of market history, forward-thinkers would be wise to follow it and use it in addition to the S&P when setting up pivot points for trades.

The financial sector is still a large weight inside the S&P index, and yet it hasn't dragged the S&P below the DJT in the last 3 months. The index is not signaling a sustained economic recovery anytime soon. The longer-term (5 year) chart reveals fairly solid footing in the 2,600 range, yet forward-thinkers respect the over-shoots that a climactic bottom prints. 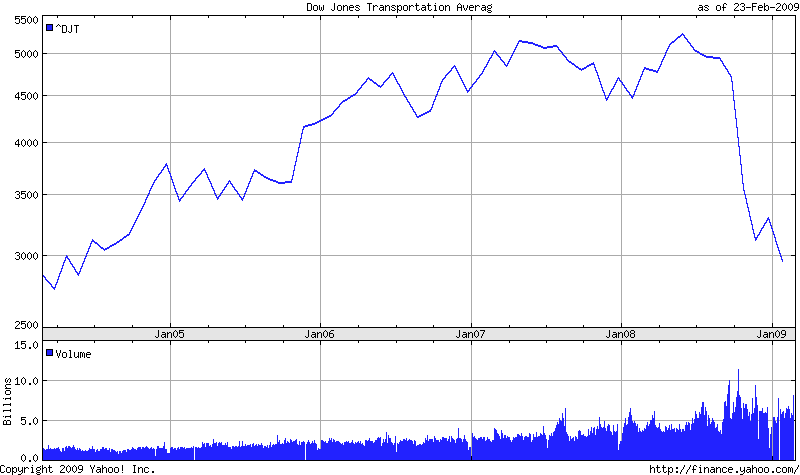 While you can invest in thousands of stocks that are not directly part of the DJT, just about every stock you choose will be at the mercy of some transport cost(s). So please give some respect to the Dow Jones Transportation index; it has stood the test of the most powerful judge, Father Time. If you share our optimism in an eventual economic recovery, monitor this index in the next few days, weeks and months; it may help you profit.

Psychology Of The Call