As more and more technical indicators become more taught, followed...and misunderstood I wanted to geta contrarian view of the MACD. I asked Mark Young from ChartSmarts and Wall Street Sentiment to do that for us. I've known Mark for a while and can attest to his knowledge so please take some time and read the article below and comment as you see fit! You can also learn more about MACD HERE.

Throughout my 28 year career as an investment professional, I've learned that you've got to do things differently if you expect to beat the averages. More importantly, I've learned that one has to separate oneself from the herd if one wants to avoid being trampled by them. As such, I'm always looking for an edge to set my trading apart.

With that approach in mind, I'm going to risk being mistaken for an investment "guru" cliche' and tell you that I've got a secret "they" don't want you to know: The most popular technical indicator available today-- is a fade.

The single most followed technical indicator is the MACD. It's probably the first tool an investor or trader is ever presented with. It's probably the most easily understood, too. As such, and like most popular investment tools, it has almost completely lost its utility, and I have discovered that the MACD is more effective and more profitable when used to fade signals, rather than to take them.

Take a look at this simple chart of the weekly MACD (using the StockCharts.com default settings). Now, note that nearly every cross-over Buy and Sell on this chart was a fade within a week or two. 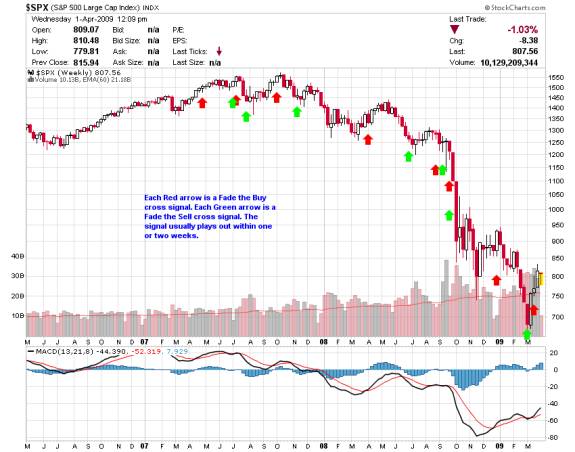 It's uncanny. Not perfect, not usually long term, and not always easy to trade, but almost always there was an opportunity to make money trading against the signal in pretty short order, even if it's going against the larger trend.

What that means is that any "system" that relies upon MACD cross-overs is likely  to lose money. That’s why, with a little trading expertise and some fine tuning, the few traders who know this little gem can winnow out some fine profitable trades when others are suffering draw downs over and over.

This approach can be used for almost any trading tool that has a wide following. It works on multiple time frames, too. This is especially true if there is a long history of profitability that neophytes can build their confidence with. If less sophisticated traders can be predicted to go long or short reliably, there's a good chance that the trading "sharks" are going to exploit that.

If we can identify what the herd is doing or is likely to be doing, then we can avoid the fleecing that they'll be subjected to and quite possibly even manage to improve our equity lines.

12 thoughts on “Breaking Away From the Herd: A Contrarian View of the MACD”