Our guest blog post today is from Jackie Ann Patterson of BackTesting Report.  Jackie’s trading experience extends back to 1994 when Silicon Valley stock options piqued her interest.  In recent years, she’s focused her computer skills on the markets, back testing several indicators on 7,147 stocks over 14 years of price history.  Today’s Trader’s Blog post gives an overview of the MACD indicator.  You can find out more by watching the free video at The Truth About MACD.

The Moving Average Convergence Divergence (MACD) started as a simple concept: measure the difference between two exponential moving averages (EMAs) to get early notice when they might cross.  New applications evolved over the years.  Now the MACD Lines and Histogram form a complex technical indicator that is used in a myriad of ways.  This guest blog post describes the MACD signals in the order of their appearance on the chart, showing you which are the earliest signals to pick up a potential trend change and which indicate a mature trend.

The very first indication that the price may be headed upwards is given by an uptick in the MACD Histogram from below zero.  The MACD Histogram is the set of gray bars labeled “Divergence” on the MarketClub charts.  See Flag #1 in Figure 1 and magnified in Figure 2.  This signal is distantly derived from price.  It reflects a change in the distance between the MACD line and its Signal line; a MACD histogram move towards zero indicates that the MACD is moving closer to its Signal line. 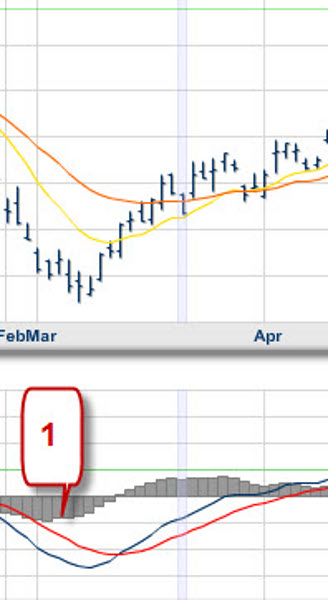 The blue MACD line itself shows the first indications of a price rise by changing slope, as shown by the #2 Flag in Figure 3 above.  Flag #2 appears in two places on the chart because a MACD line slanting towards zero indicates that the two EMAs on the chart are moving closer together.

The two EMAs which form the basis of the MACD are typically the 12-bar EMA (plotted in yellow on the example charts) and 26-bar EMA (plotted in orange on the examples).  Different settings may also be used.  When the two EMAs cross, the MACD line crosses zero, as marked by Flag #4.  This is a very common buy signal, whether a trader is looking at MACD or EMAs.  This relates to price because a rising price will move the faster (12-bar) EMA up more quickly than the slower (26-bar) EMA.

As the price continues to rise, the faster EMA will continue to outpace the slower EMA, and the MACD line will rise above zero.  As the MACD line moves up, it will necessarily move faster than its Signal line.  That pushes the MACD histogram taller and taller.  At this point, the uptrend is well underway. 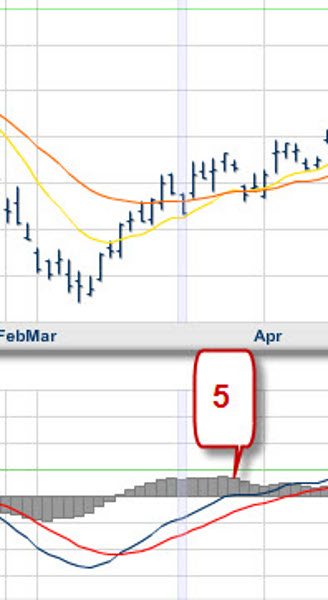 Sooner or later the momentum slows and the MACD Histogram ticks down with a shorter bar (Flag #5 in Figure 6, magnified in Figure 7).  This means that the MACD line is no longer running away from its Signal line.  As the downward move grows, the two EMAs start moving together and the MACD line will move down itself (Flag #6 in Figure 8 below).

Eventually, the MACD line may drop below its Signal line, and at the same time the MACD Histogram crosses zero.  Flag #7 identifies these MACD crossings in the Figure 9 below.  It appears repeatedly because this example has multiple MACD crossings as the price see-saws in a trading range.

If the downward momentum builds, the MACD line drops below its zero line, signaling that the fast EMA has crossed down through the slow EMA (Flag #8 in Figure 10 below).

My extensive back testing with 7,147 stocks over 14 years shows that not all MACD signals are created equal.  In fact, some commonly cited MACD configurations performed no better than chance while others scored big in the right situations.  To see the best of the MACD signals, visit The Truth About MACD and watch my free video.

17 thoughts on “The Many Moving Parts of MACD”