One of the most popular questions that we're asked here at MarketClub is to recommend which chart studies should be used in conjunction with one another. While we don't have an answer for this question - mainly because we realize that there is no right answer, you're in luck as today's guest blogger has developed a strategy using 3 different technical tools and described it in detail for us below.

Gary Wagner of WFGForex.com has developed a unique strategy using Elliot Waves, Fibonacci retracements, and candlesticks to gain insight on the current gold market. Since Gary received such a great response last time he was a guest, we hope that you will enjoy is newest post as well. Read about this interesting way of analyzing the market and leave your comment below.

Most market analysts will agree that supply and demand economics are a major influence on the current price of a commodity. It is however market sentiment that greatly determines the perceived future price.  If one can understand, and quantify market psychology or market sentiment, one can more effectively forecast future prices. This has been the underlining assumption of Elliot Wave and Fibonacci Retracement theory.

To the market technician Elliot wave and Fibonacci retracement theories go together like peas and carrots. Elliot Wave incorporates many aspects of the Fibonacci sequence and retracement theory. It uses different retracement levels as benchmarks that certain waves should go to. Even though when R.N. Elliot created his theory he did not know of Fibonacci theory and only made this correlation later on in his studies, they are now considered to go hand in hand with each other.

Might I suggest a third ingredient to the mix, Japanese Candlestick pattern theory?  I have found that adding this technique in combination with both wave and retracement theories can deliver greater market insight.

These techniques are all based upon the assumption that a market’s behavior is based upon natural laws of nature and laws of market psychology. They all believe that these natural cycles can be identified and quantified to use in market forecasting.  All three techniques believe that the ways markets behave are predicable; because there is a mass psychology that guides and defines the way we as traders think. All three techniques although different, have identified a specific and mathematically definable set of rules and guidelines.

Elliot wave, Fibonacci retracement and Japanese candlesticks are roadmaps or descriptions of how markets might perform. They are all able to define market sentiment or market psychology in mathematical terms. It is my assumption that by combining these three techniques together the synergistic effect is a more reliable and a much more effective process for price forecasting.

As the executive producer for the “Forex Gold Forecast” tm, a daily video newsletter, my focus has been on the price of gold. As of this writing gold is trading at a record price, as the prior historical price of 1221 was surpassed and is currently trading at 1230.  The price of gold has moved in a predictable manner, if you know the right roadmaps to follow. By applying the Elliot wave count, one is given a tremendous amount of information and insight.

According to Elliot wave theory, a market trend follows a cycle. That cycle is made up of eight waves. This eight wave sequence will repeat until the trend is exhausted. This trend structure is composed of eight waves, divided into 2 phases; the motive phase and the corrective phase. The motive phase is composed of 5 waves (waves 1 through 5). Waves 1, 3 and 5 will move in the prominent direction of the trend. These 3 waves are called the motive waves. They will be separated by two retracement or corrective waves (waves 2 and 4), where the price action will move against the current trend. The corrective phase is composed of three waves (A, B and C), they will move opposite the primary trend. Waves A and C will be corrective waves, while the B wave will move in the direction of the primary trend. 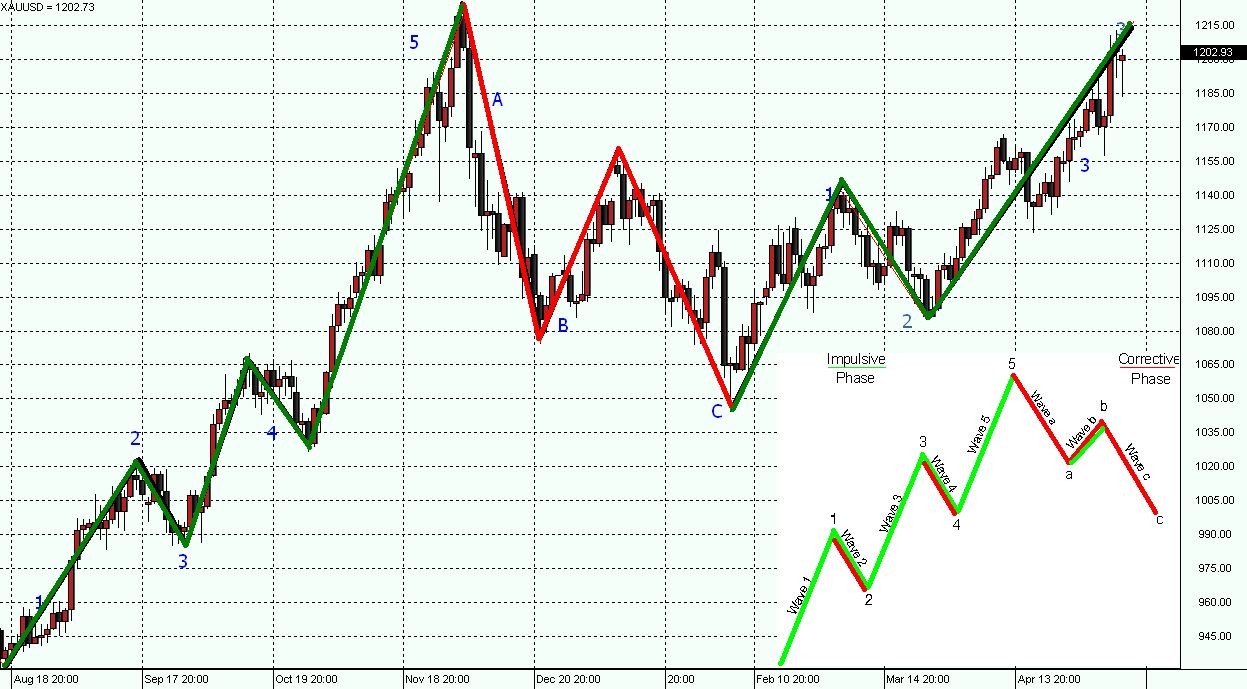 Figure 1 is a daily candlestick chart of Forex gold (US/UAX) in which the Elliot wave count has been added. The motive phase drives gold to a new historical high of 1221 in December of 2009.  The corrective phase in Forex gold lasted from December 2009 to February 2010. With this top in place we were able to calculate our Fibonacci retracement levels. We used the low created just before gold broke 1000 which was at 980 dollars per ounce, and the high at 1221dollars. During the corrective phase the market will give back a percentage of its gains. It will not be until the completion of the full wave count at the C wave that gold will find a bottom, and begin the wave count all over again. By the completion of this corrective phase, gold had given up almost 78 % of its gains closing at just 1040 dollars per ounce. 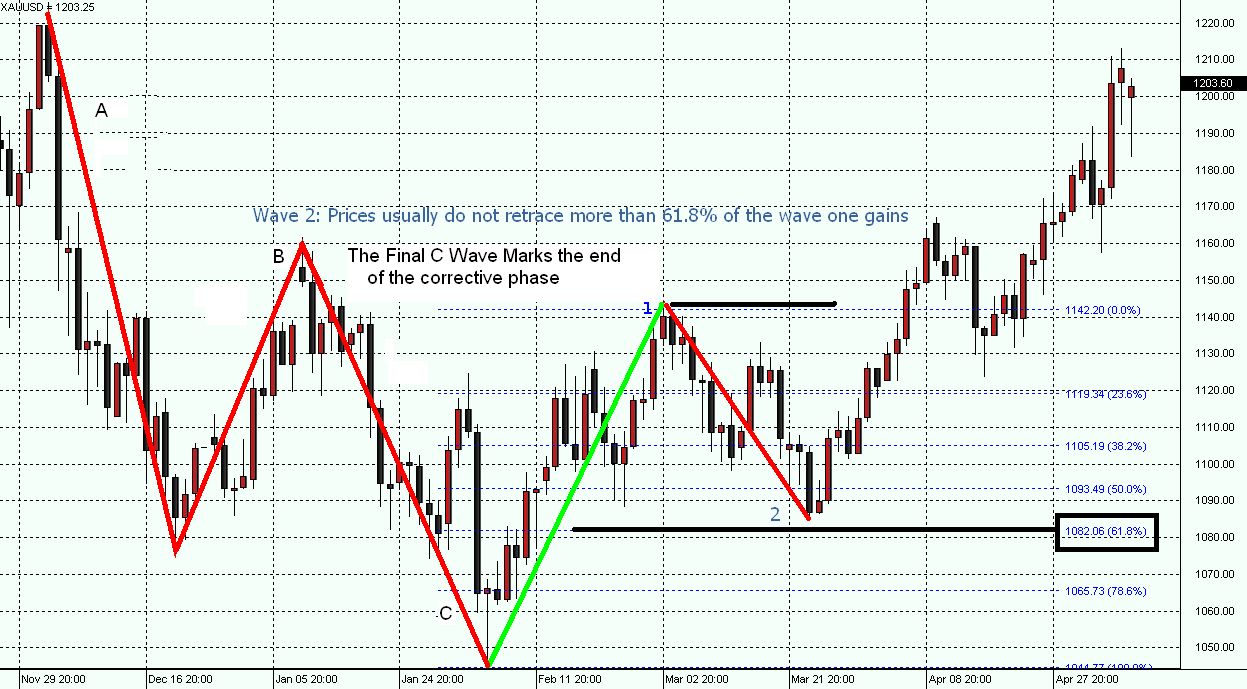 After the completion of the eight waves, the cycle is completed and the count begins again. Once again the gold market enters the motive phase. This is the phase we are currently in. The first Wave (1) occurred on February 2, 2010, as seen in figure 2. From a low of 1040 per ounce, gold climbed 100 dollars higher to over 1140. Gold prices moved from the 78% retracement level to above the 38 % retracement level on this single wave.  This signaled the first corrective wave (2).  There are specific rules for the wave count. Corrective wave 2 should not retrace more than 61.8 % percent of the gains achieved in wave 1. Wave 2 which took just under three weeks to complete did in fact trade right to that Fibonacci retracement level. 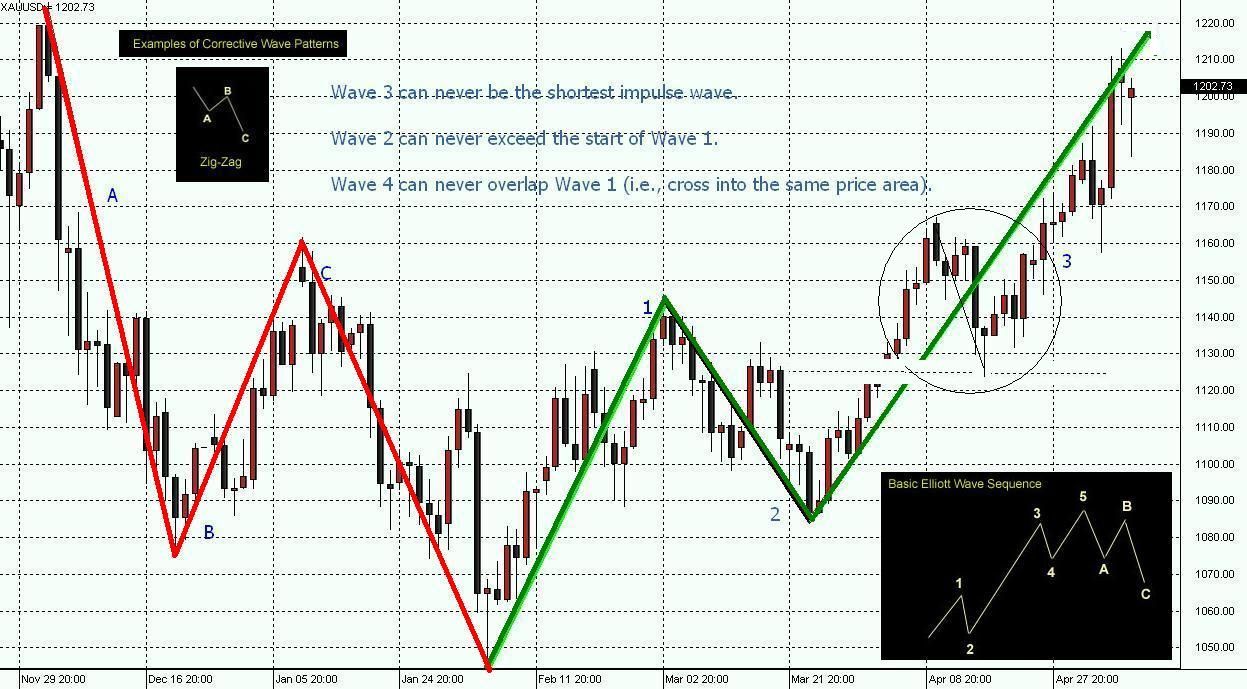 To the untrained eye, some might consider the wave count to be subjective, with room for interpretation. Because of the complexities in which markets behave, there are many variations to basic wave pattern. However all wave patterns must follow 3 major rules that R.N Elliot indentified. These three rules have no flexibility, and for one to achieve a correct wave count all 3 rules must be followed. Figure 3 illustrates the basic example of the wave count with all three rules in place. Because rule three states that wave 4 can never overlap wave 1, we have a clear indication that the current wave 3 has not ended.

Figure 4 is a daily chart of Forex gold starting at wave 1 after the completion of the 8 count. This chart contains the Fibonacci rules needed for a correct wave count.  According to this count we are currently in wave 3. If this wave count holds true, we could see the full wave not completed until it reaches 1.618 times the size of wave 1. This could take the market as high as 1246.  We should experience a corrective wave (wave 4) after the completion of wave 3; this correction should retrace roughly 38 % of the gains in wave 3. This will be followed by one more motive wave (5) to complete the motive phase.  Wave 5 should take gold to a new record high price, moving a length equal to wave 1. 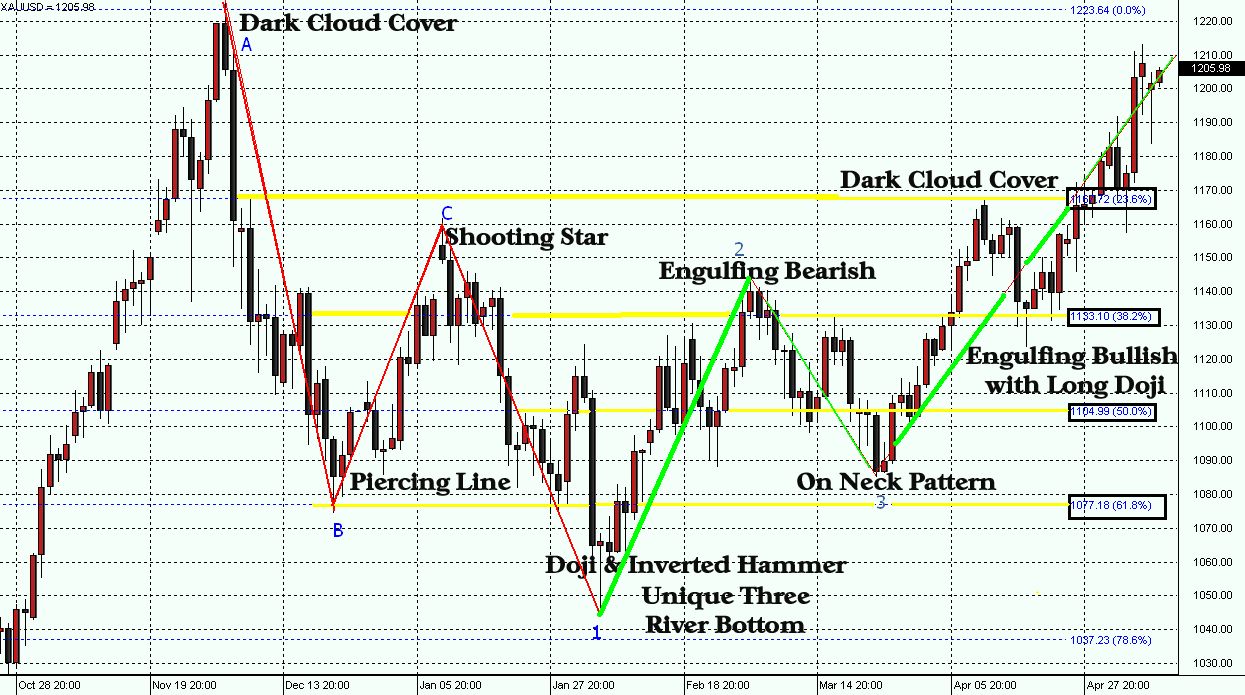 Figure 5 examines all three components of this technical triad: Elliot wave, Fibonacci retracement and Candlestick patterns. If we look to see the points where all three indicators are in confluence, we can effectively create a triple filtering system.

In figure 5 the first corrective phase’s wave (A) trades to a low of 1077, the 61 % Fibonacci retracement point. A piercing line pattern forms and signals a bullish reversal... The B wave trades higher finding resistance just below the 23 % Fibonacci resistance level. A “Shooting Star” candle marks the top. This marks the end of wave B. The C wave, which is the last of the corrective phase breaks below the 61 % retracement point and just before it reaches 78 % multiple candlesticks and a rare candle pattern form. Two reversal candles the Doji and inverted hammer are part of a pattern called a unique three river bottom. This signals the end of the corrective phase, and a new wave count begins at again. An Engulfing Bearish signals the end of wave 1, just as the on neck pattern signals a bullish reversal and the end of wave 2.

It is my contention that Japanese candlesticks have an uncanny ability to reveal and identify key reversal points quickly; however filtering these signals with other market information is a critical component for success. Where a pattern is found within the trend determines the strength or weakness of that signal. By looking at all three methods at once, one is given a very comprehensive market analysis.  By combining these three methods one can produce much greater insight then any of these techniques by themselves. They completely complement each other, and naturally form a more synergistic approach to market forecasting.

Bio:
Gary S. Wagner has been a technical market analyst for twenty five years. He is the Co-author of “Trading Applications of Japanese Candlestick Charting”.  A frequent writer for Technical Analysis of Stocks & Commodities magazine, he also Co-developed software applications for market forecasting. He produces a daily video newsletter “The Forex Gold Forecast tm” for WFGForex.com.  Gary can be reached at [email protected]

30 thoughts on “A New Technical Triad and Gold”