By: Chris Irvin, Veteran Instructor & Trader at The Wizard

My last blog (May 9, 2012) spent some time dealing with the logical and emotional sides of the brain and how the flow of information from side to side differs between men and women.  Among other things I suggested that in order for a male trader to be successful they have to have an exit strategy before entering a position because our egos can often get in the way of solid decision making while in the middle of the trade.  I am a firm believer that traders need to define exits prior to entering a position because this is the only time when ego is not an issue in the process.  This idea brought up a valid comment from one reader.  “Wouldn’t it be easier to just put a trailing stop on your position rather than defining a solid stop loss level?”  It probably would be easier, but is it the best?  In this blog I would like to explain why I believe repositioning stop losses manually is a better idea than using trailing stops, if you have the option of course.  If you are a trader that does not have the ability to adjust stop losses manually due to schedule, or circumstance, the trailing stop is a great tool.  If you do have the ability to babysit your trades then I believe it is better to reposition the stops on your own.

Stop Loss -An order placed with a broker to sell a security when it reaches a certain price. A stop-loss order is designed to limit an investor's loss on a security position. (Investopedia)

Trailing stops are “Me Centered” stop losses.  What I mean by that is that a trailing stop loss’s “trail” is usually based on how much money the traders is willing to lose in a trade (Maximum Risk), but does not take into account what the market is telling you about the risk in the trade.  I would suggest that the most successful traders are not “Me Centered,” they are “Stock Centered” traders.  The “Stock Centered” trader placed stop losses based first on the stock’s price action, and second on the trader’s maximum acceptable loss. Let me explain the concept by laying out what I call a “Go Moment” trade.  “Go Moment” trades have objective entries and objective exits.  No guessing.  The Wizard specializes in this type of trading system. The basis of this trade will be a breakout off of a reversal.  The concept at the root of the trade is the definition of a bearish trend.  The definition says:

Bearish Trend = A series of lower highs and lower lows.

For this example the stock is irrelevant.  It is the pattern that counts.  At The Wizard, we teach the safest way to trade is with the trend, and the best time to enter is at a breakout.  The stock below is clearly in a five month upward trend, and has recently had a gap to the upside that led to light profit taking.

Let’s concentrate on the past 12 trading days.  Following the gap up you can see that the stock hit a high of approximately $24.00 and then retraced to approximately $21.00.  On a minor scale this was a six day downward trend. Following the low near $21.00 the stock move up and ran out of steam just below $23.00.  Because the price action established a lower high (beneath $24.00) we would conclude that the downward trend is still intact. (Definition of a bearish trend = A series of lower lows and lower highs.)   This weak move up was followed by a move back down to around $21.50.  At $21.50 the sellers lost control and the buyers stepped in pushing the stock above the most recent high of $23.00.  The move above $23.00 confirmed a reversal of the downward trend because the price movement established a higher high. 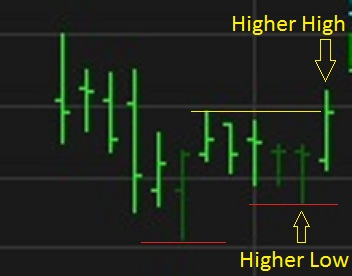 Before taking a bullish trade like this, the trader must first determine what the risk is in the position. The formula for determining risk is…

Why?  Because based on the fact that the stock has now established a higher low and a higher high we can assume that, within this timeframe, a new bullish trend has been established.  What is the definition of a bullish trend?

Bullish Trend = A series of higher highs and higher lows.

Logically, we can stay in our bullish position as long as the price action does not create a lower low.  Remember, you cannot have a lower low in a bullish trend by definition.  With that concept as our foundation, the stop loss must go just below the previous low of $21.50. 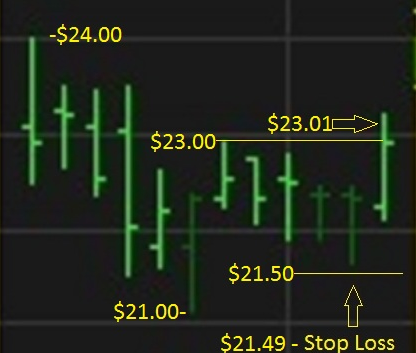 Now that we have a trade positioned in our heads, let’s get back to the original question – Is it better to use a trailing stop loss or to reposition your stop loss manually? 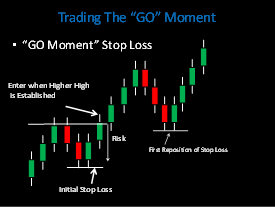 The Wizard software provides updated stop losses every evening after 5:00 PM for every stock.  This information helps traders to know exactly where to reposition their stop losses while being a “Stock Centered” Trader.

Try The Wizard’s Market Trend Indicator for free. Click here and sign-up in the upper right-hand corner of the web site