Apple (NASDAQ:AAPL) is no longer the high flying growth giant the markets once loved. In the ten-year period starting in 2003 the stock saw gains of as high as 5,000%. The run up was nothing short of Wall Street magic.

Those days are over…but a new opportunity has emerged.

You see there are two classes of stocks. The first is comprised of optimistic growth stocks – Google, Tesla, Amazon and the like. These stocks trade at incredibly high earnings multiples because investors are factoring in expected growth. Simply put, they are anticipating the company to grow its earnings at a much faster rate than the overall market and therefore are paying much more for the cash these companies are generating today.

This is known as speculation. I prefer to think of it as gambling, but that's another topic.

The second class of stocks is made up of dominant, blue chip companies. These are market staples that everyone is familiar with and have consistent track records of proven earnings. More active investors tend to think of these stocks as boring, and in their defense, they usually are. For the most part they follow the trend of the overall market and don’t experience the same extreme price fluctuations found with speculative growth stocks.

Apple has now become the latter. It joins the ranks of 3M, General Electric, Home Depot and the majority of the Dow Jones 30.

However, lying deep below its presently boring, predictable exterior lies something you cannot find in other "boring" stocks – raw, uncapped, game-changing potential that could and likely will be unleashed in the near future.

Everyone knows that Apple was a game changer. No one can argue that.

They completely revolutionized the cell phone market and left competitors scrambling to produce a rival product. They changed the way we buy, share and listen to music. They streamlined media through their Apple TV and iTunes store in ways never imagined just ten years ago. They introduced the world to tablet PCs, cleaner operating systems, and a vertically integrated architecture that has raised the bar for every technology company in the world.

All of these things they accomplished in under a decade.

The question everyone’s asking today is, "What are they going to do next?"

And no one has the answer. Investors became so accustomed to explosive earnings growth and exceeded forecasts that as soon as Apple was inevitably forced to slow down and take a breath, the stock dropped like a rock – 45% in just over 7 months. 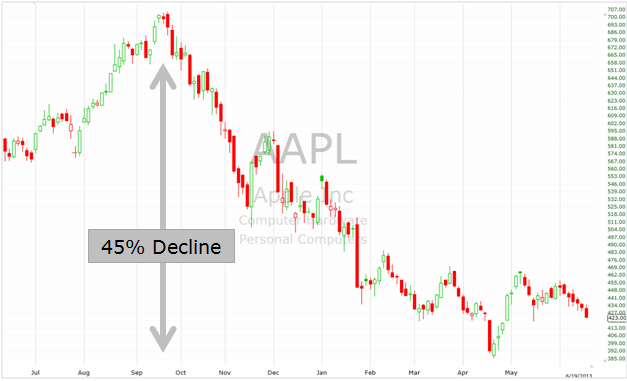 As of July 2013 the stock was trading at about $450 per share. This is where the opportunity arises for us.

Please note that I am not speculating on Apple’s next product or what its earnings will be for the upcoming quarter. The analysis I am about to share with you is made under no presumptions of future projections or product offerings. In fact…

Pretend that they will never again change the face of consumer technology (even though I think they will) and sit content earning roughly the same numbers they have been reporting for the last twelve to eighteen months.

Keep in mind that Apple only holds a 10% market share in the mobile phone market – far lower than Nokia’s 16.6% and Samsung’s 29.0%. They do not sit on the 1st place pedestal with nowhere to go but down.

Let’s see what this company is worth and how it stacks up against the rest of its "boring" slow-growth friends.

For the trailing twelve months leading into Q2 2013, Apple was producing a 28.00% return on equity. As of July 2013 the stock was trading at just 2.40 times revenues with a P/E ratio of just 10.14 (the price to earnings ratio is simply a multiple of how many times net income the stock is trading for).

Free cash flow, the truest measure of a stock’s ability to generate cash and growth for shareholders, also comes in at a low multiple of just 9.09.

This means that if you owned 100% of Apple, Inc., after all revenue is counted and all expenses are paid, you would have received an 11% return on your money – not bad for a boring stock that everyone has written off.

But that doesn’t even factor in the cash hoard held by the company.

Of the company’s $412 billion market cap (total number of shares times price per share), the company holds $116 billion in cash. This means that over 28% of the share price is protected by cold hard cash. Factor that in to the previous free cash flow yield and you are looking at a 15.49% return.
To put these numbers into perspective, let’s compare them with a few other staple companies:

As you can see, Apple has a price to earnings ratio well below the market average (18.83 for the S&P 500 as of June 2013), a high cash yield, more than respectable cash reserves, and a competitive dividend.

But how likely is it that Home Depot, 3M, Wal-Mart or even Microsoft will develop new products that not only shape the lives of consumers, but also unlock huge new sources of revenue?

The fact is that even though Apple is priced at a level below similar large cap stocks, its future prospects are miles ahead of the other companies shown.

We don't know what that next great product is going to be. None of us could have imagined iPads, iPhones, Apple TV’s and iPods in the hands of so many less than a decade ago. Apple is an innovator, and even though Steve Jobs has since passed, this company will continue to operate on the cutting edge and bring new products to market that competitors will be forced to mimic as they have been since 2003.

You are still getting a wonderful company for lower multiples than you can buy other large blue chips.

And guess what companies do when they no longer feel like they can grow? They pay out excess cash in the form of shareholder dividends. Apple began paying dividends for the first time in August 2012. For the last 12 months, they have paid out just 19% of earnings for the same time frame. If they start distributing their $100 billion+ cash vault, we could see some huge one-time special dividends (a common practice for cash-rich companies that run out of growth channels). I expect Apple to develop into more of a blue-chip stock, in which case they are likely to increase this payout ratio dramatically.

To give you an example, Johnson & Johnson pays out 66% of its earnings in the form of dividends. 3M and Kraft Foods each pay out approximately 38%. Similar levels for Apple would equate to a 6-10% dividend at today’s prices.

All of this adds up to one thing – Apple is much safer than investors think.

Most people would argue that Wal-Mart is about as safe of a stock as you can buy. But is it really?

As of July 2013, it trades at almost a 50% greater earnings multiple and has a true earnings yield of less than half that of Apple. It holds less cash reserves and offers a lower dividend. Their earnings are slightly more consistent, but their growth potential is nowhere near that of the iGiant. You are simply paying more money for every dollar of this company’s earnings, therefore reducing your yield and potential capital appreciation.

In regard to the consistency of Apple’s earnings, I think the market will be surprised at how steady they will be going forward. Even without much growth, this company has entrenched itself with consumers and developed one of the strongest brand loyalties in America. Go ahead…try and force a Mac user to switch to a PC.

The real brilliance in their product development is the vertically integrated infrastructure in which they have built their brand.

Everything is connected, synced and integrated through a near flawless multi-device operating system and e-commerce platform. Your phone automatically shares pictures, videos, purchased media, contacts and even passwords with all of your other Mac devices. Media purchases in the form of music, television shows, movies and apps can be purchased with a single click from your home computer, tablet, iPhone or iPod. This media is then digitally stored on Apple’s servers, allowing you to access it from any device at any time.

Lose your iPhone? Enter your Apple ID and everything magically comes back to life. Your contacts, emails, music, videos, pictures and personal files are effortlessly restored to your new device. This high-level integration creates loyalty from consumers, whether they like it or now.

You see, over time consumers build up a digital library of purchased media and personal files. To leave Apple means to leave all of that behind. In true Apple fashion, nothing is compatible with their competitors’ operating systems. Your music albums, video purchases, stored passwords, contacts and other data are all lost by switching to an Android or Windows platform. It is the modern day equivalent of losing your purse or wallet and having to replace your driver’s license, credit cards, personal photos and anything else you kept safe.

Cell contracts will end, hardware will become outdated, your kid will step on your iPad, and people will continue to replace their electronics with Apple’s newest versions.

The biggest mistake Wall Street is making is not recognizing the customer loyalty and future earnings consistency of this company.

If you are looking to add long-term holdings to your portfolio – take a look at Apple (NASDAQ:AAPL). This is a rare chance to buy an industry leader at below industry prices.

To sign up for free nightly educational videos, visit www.BlueTickResearch.com

Ross Givens is a security analyst with a great devotion to the strategy of value investing. He uses company fundamentals to calculate share values based on net working capital and future earnings projections and then invests only when stocks are trading at a deep discount to that value.

As a former investment advisor, registered representative, securities broker and AP, he worked for major wire houses, wealth management firms, day trading companies, investment educators and managed commodity programs. With years of experience and an inside perspective from some of the biggest names in the investment world, Ross brings a unique approach to the equity markets.

Disclosure: INO.com is not affiliated with Blue Tick Research and doesn't hold any shares of Apple, Inc. (AAPL)