We wanted to follow-up regarding an exclusive report that we released on February 28th, entitled "This Undervalued Energy Stock Could Soar." If you registered to view this report, then you would know that this energy stock is up approximately 14.77% from February 28th's open price until yesterday’s close. Not too shabby!

We will be releasing INO.com friend and analyst, Wayne Burritt's latest report early next week. What will be the sector he's watching and is there a potential breakout stock? Please visit us early next week or sign-up for our blog alerts to make sure you don't miss our next exclusive report!

If you didn't get a chance to access this report in late February, please see a full version of the VLO analysis below.

I have my sights on an energy company with loads of upside. But first let's take a look at the overall market and the energy sector in particular.

The fact is, you don't have to search very far to figure out what the stock market has been up to lately. A picture tells a thousand words... 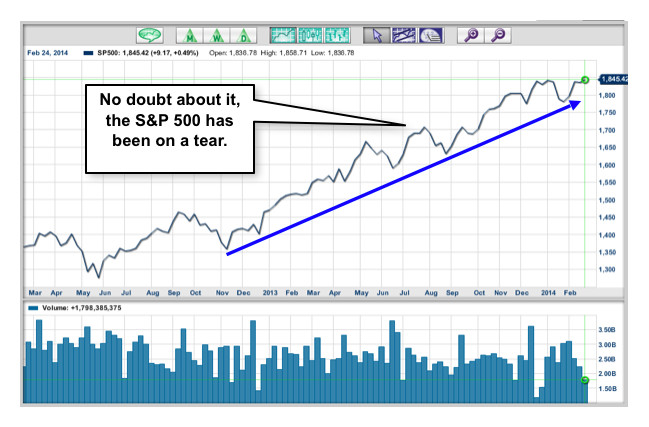 I'm not just hanging my hat on the "technical" aspects or looking through the lens of charts and price movements of the U.S. stock market. The fundamentals, or nuts and bolts of the U.S. economy are also going gangbusters... 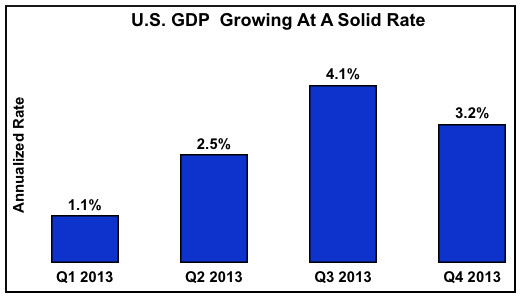 Gross Domestic Product (GDP) in the U.S. was a solid 3.2% annualized rate in the fourth quarter of last year. While it was off the comparably blistering rate of 4.1% in the third quarter, the U.S. managed to put together the best back to back quarters in two years.

Not bad. Especially when you consider the massive shocks the economy withstood during 2013 including, but certainly not limited to sequester budget cuts in March and a government shutdown in October. And with estimates calling for another 3% or so growth rate in 2014, U.S. growth is solid.

But the fundamentals of the U.S. economic story aren't just about GDP. Take a look at any of your other favorite economic indicators, including stats on the labor market, industrial production, housing, consumer sentiment and the news is pretty much the same: The U.S. economy is in good shape.

That means the rise in U.S. stocks, as indicated by the chart of the S&P 500 I showed you earlier, isn't built on a house of cards. It has strong fundamental support. And with those kinds of legs it's now time to take a look, as I promised, at one of my favorite sectors and within that sector, a company with outstanding potential.

I've always had a preference toward the energy sector. It's exciting to watch, filled with lots of innovation and challenges and it boasts some of the biggest companies around.

I also like it because with the economy now on the mend, the energy sector should enjoy lots of upside. After all, when people and companies are doing well, they need lots of energy to make things run.

I'll let you in on one company in the sector that is a stand out in a moment. First, let's take a look at a chart of the Energy Select Sector SPDR (XLE), a good proxy for the sector as a whole: 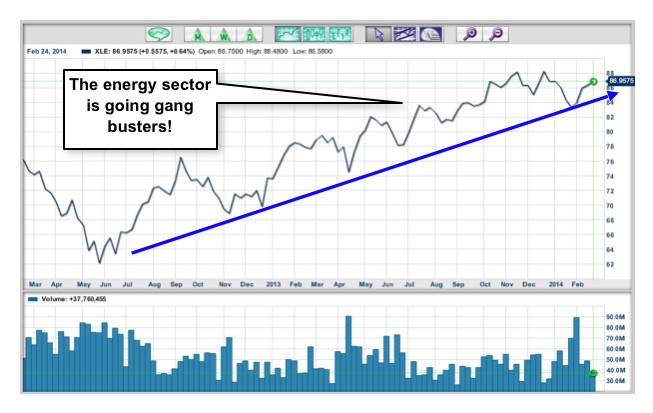 As you can see from this weekly chart of the XLE, the sector has been in a solid uptrend since May 2012. While there have been pullbacks along the way, the uptrend has stayed pretty much intact. The shares are also poised to break above a key line of resistance at $88, another positive.

Now, if you like, you can go out and buy shares of the XLE. After all, it's an Exchange Traded Fund, a security that tracks a basket of shares but behaves and trades like a stock. But if you're looking for one of the standouts in the XLE, read on.

When it comes to one of the strongest companies in the XLE, you don't have to look much further than Valero Energy (VLO). This energy refining giant is poised for big upside potential based on a package of solid fundamentals, strong sector and economic support, and an attractive technical outlook.

Valero Is the Largest Independent Refiner On the Planet

Valero Energy began in 1980 with one refinery and is now the undisputed global leader among independent refiners. It boasts a mind-boggling 16 refineries, 10 ethanol plants, and a 50 megawatt wind farm. It has a massive combined throughput (read: capacity to refine crude oil) of 3 million barrels a day. Its refineries stretch from California to Canada to the United Kingdom.

It's not just Valero's production capacity that has me smiling, it's also the company's refining product portfolio. The company produces nearly every common refined fuel product out there, including gasoline, jet fuel, and diesel. It also produces a wide array of petroleum-based refinery products including asphalt, petrochemicals, and lubricants.

Boasting a wide production portfolio is important because it means that Valero can adjust its product mix to changing needs of the marketplace. In addition, Valero has the capability to expand, change and upgrade its refinery network as demand dictates. That means a more reliable collection of revenue streams down the road.

As an independent refiner, Valero does not need to drill for its own oil. In fact, it purchases its oil feedstock from a variety of sources, many of which are discounted. These sources can include production leases, domestic trading sources, and oil tankers delivering stock of domestic and foreign oil. That amounts to a large market of crude feedstock vendors, a big plus for Valero when it comes to purchasing crude. After all, with multiple suppliers of crude, Valero can be picky about price.

Valero markets its products through more than 7,300 outlets in the U.S., Canada, and the United Kingdom. It makes its bread and butter through the sale of its refined products. News on this front couldn't be better.

Here's the best part. Over the same time period, from 2010 to 2013, Valero's profits or what's left after paying all expenses, have skyrocketed. Take a look... 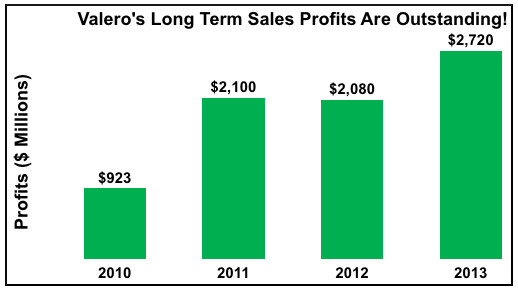 As you can see from this chart, Valero generated $923 million in profits in 2010. In 2013, that bottom line exploded to $2.7 billion. That's nearly three times the profits in 2013 compared to 2010. Based on an annual compounded rate, that's growth of over 43% each and every year. No other way to say it, that's simply outstanding work.

When you compare the rate of Valero's sales growth to its profit growth, profits are buzzing along at a much faster rate. That's a tell-tale sign of Valero's efficient operations and optimal productivity, two big pluses for the company's management and its future results.

On a per share basis, Valero stockholders earned a whopping $4.97 per share during 2013. While that's up nicely from 2012's $3.77 a share, analysts are calling for the company to earn $5.82 a share during 2014. That's a solid 17% increase in earnings per share this year compared to last. To make matters even better, the trend in Valero's earnings estimates is heading up, not down.

Valero Is A Great Value Play

No doubt about it, Valero's fundamental house is in order. How does that compare to its share value? Here again, the news is good.

Valero boasts a price to earnings ratio (P/E) ratio of 10.2. Compared to its competitors and the overall market, the shares are significantly undervalued. See for yourself: 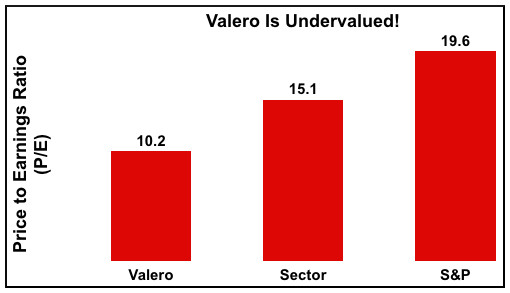 Valero Has An Attractive Technical Outlook

Still, it's not just fundamental power and plenty of upside value that has me convinced about Valero. It's also the company's technical outlook... 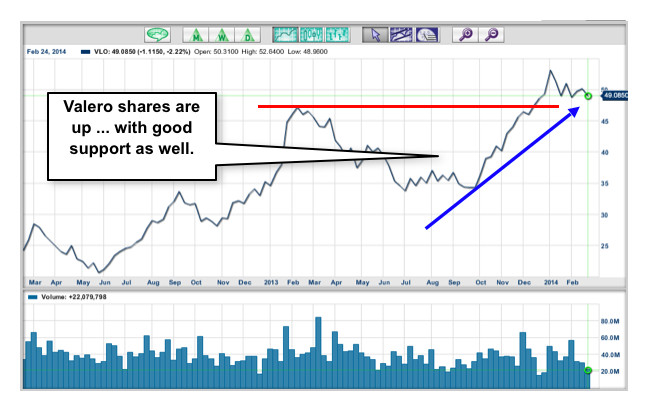 The blue trend line on this weekly chart shows Valero's quick rise over the past few months. It made a little correction around the first of the year and appears to be on the rise again. Although not drawn on this chart, from a low of $20 in May of 2012, the stock has made a solid upswing.

In December of last year the share price broke above resistance at $47 (the red line on the chart). That level should now become a solid floor of support for the shares. Certainly, a test of that support level will likely be in the offing down the road, but the break above is a technical positive.

Valero Energy boasts a global market position, excellent fundamentals, and undervalued shares. In addition, the stock has a solid technical outlook with good price support. Throw in strong fundamentals for the U.S. economy and an attractive technical take on the sector and it's clear Valero in an energy company you don't want to miss in 2014.

I hope you enjoyed this report,

MarketClub is owned and operated by INO.com INC (hereafter referred to as “INO”). INO is not a registered broker dealer or a registered investment advisor. No information accessed through the INO.com website or any newsletter constitutes a recommendation to buy, sell or hold any security in any jurisdiction. Please consult a broker before purchasing or selling any securities viewed or mentioned herein. INO has made every reasonable effort to ensure that the information and assumptions on which these statements and projections are based are current, reasonable, and complete. However, a variety of factors could cause actual results to differ materially from the projections, anticipated results or other expectations expressed in this release. INO makes these statements and projections in good faith, neither INO nor its management can guarantee the accuracy of some of the content in this release containing for-ward-looking information within the meaning of Section 27 A of the Securities Act of 5/27/33 and Section 21 E of the Securities Exchange Act of 6/6/34 including statements regarding expected continual growth of the profiled company and the value of its securities. In accordance with the safe harbor provisions of the Private Securities Litigation Reform Act of 1 995 it is hereby noted that statements contained herein that look forward in time which include everything other than historical information, involve risk and uncertainties that may affect a company’s actual results of operation. A company’s actual performance could greatly differ from those described in any forward looking statements or announcements mentioned in this release. Any investment in a company profiled by us should be made only after consultation with a qualified investment advisor and review of the publicly available financial statements and other information about the company profiled in order to verify that the investment is appropriate and suitable. Information has been obtained from sources considered to be reliable, but we do not guarantee that it is accurate or complete.

One thought on “Report Follow-Up: This Undervalued Energy Stock Could Soar”