In our last review on the Pound Sterling, we noted that the currency had been weak amid a soft patch in the UK economy. The pace of GDP Growth was slowing and unemployment was no longer falling, yet the robust retail sales figure had provided a bright spot for Sterling bulls. While growth momentum has continued to slow, it has remained fair, and with massive easing coming from across the Channel, i.e. the ECB’s QE program, Sterling was able to gain ground vs its European peer. Yet, with the BoE meeting looming next week, and the release of the February inflation report and Mark Carney’s follow speech, there is growing speculation that the BoE may open the door for a possible retreat, or perhaps even a U-Turn, in its plans for rate hikes. What is that speculation based on and how could it impact the Pound Sterling?

It is true that this is not a new phenomenon in the UK, nor elsewhere in the world for that matter, but as the chart below illustrates, while the Bank of England maintains a rather elevated level of expectations of potential rate hikes, UK inflation continues to be dragged downwards and is moving closer toward the disinflation levels seen in the Eurozone. Yet, even as these developments begin to take form, the ECB is in the midst of massive easing while the BoE is on the path to do the exact opposite. Investors, from their point of view, considering just how the Eurozone and the UK are so closely integrated, have thrown up a great big question mark on the proceedings.

The Threat to Jobs

There is yet another side to the decoupling rate path that investors believe should change the BoE’s direction. As Sterling moves higher against the Euro, exports to the Eurozone, which is the largest destination for the UK, have become more and more stagnant and this has had a negative effect on one of the most important indicators in the UK economy, namely jobs. As seen in the chart, the claimant count rate, which has been steadily falling and thus helped to lower UK unemployment, is losing momentum which suggests that a rate hike would lead to further Sterling strength vs the Euro and could eventually take unemployment levels even higher.

Of course, for quite some time, investors have been cognizant of those two key factors against a rate hike, yet the latest GDP results have revealed one other reason to downplay the possibility of a rate hike by the BoE. The GDP growth release from the ONS, while revealing a fair growth rate of 2.6% YoY, has also demonstrated how growth in the UK is uneven; Agriculture and Production was unchanged over the quarter, “growing” at a virtual standstill, while the Construction sector shrank. The only contributor to growth over the period was from the Services sector. Taken together, that further suggests the potential of more soft patches in the UK economy further along the road. 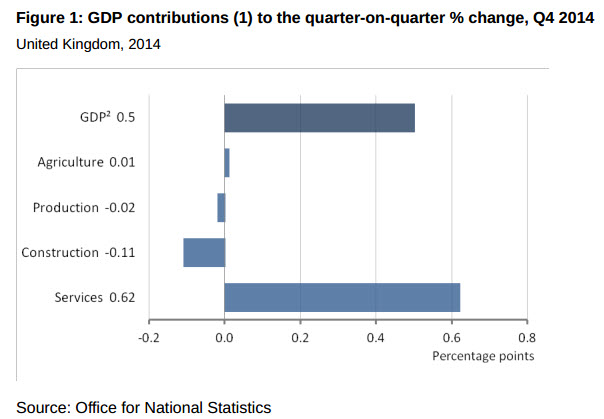 Fortunately, the UK economy is not comprised only of soft spots; there are areas of strength, as well. For example, growth, despite its unevenness, is closer to 3% than to 2%. The Services sector, which components range from banking to law, is showing surprising resilience to the weakness in Europe and continues to grow steadily over time, with PMI data suggesting that it will continue to do so. Moreover, Retail Sales, despite a seasonal slowing, are still growing at a robust pace of 4.3% and Consumer Confidence is consistently rising, suggesting that UK consumers expect their overall situation to improve and are thus ready to spend more. Despite UK inflation sliding alongside the Eurozone’s, in most parameters the UK vastly outperforms the Eurozone. And last but not least, it would be remiss not to mention the boom in UK housing prices.

If figures and data would have been concrete proof that the BoE will have to reverse its course on rate hikes, then investors would have already moved forward with big bets on a Sterling reversal vs the Euro and a further plunge vs the US Dollar. Although the BoE rate decision statement next week might surprise with a dovish tone most expectations hang on February’s inflation report and the subsequent speech given by BoE Governor Mark Carney. If the Governor continues to maintain an overall upbeat bias and the inflation report deems the slip in inflation as nothing but a temporary bump it might ease speculation, at least for a while. But if Carney reverses course and the inflation report reveals prolonged disinflation, then the once strong currency could quickly turn soft.