In recent days, crude oil and natural gas prices have continued to undulate within a range near their lows. What’s next for the commodities, and for the energy companies whose fortunes are joined at the hip of oil and gas?

Phil Flynn presented the following analysis in his article for Futures Magazine yesterday:

“In 12 data points when oil had a break of 40% or more within a year the market rallied back 52.8% within 12 months. Even when the break was only 30% with 20 times the rebound was still a very impressive 45.5% within 12 months. This snap back comes usually as the market realizes that a period of low prices will stimulate demand and cut backs in production will take their toll.”

“Over the past 50 years, there have been 6 years prior to 2014 in which the annual oil price declined by more than 25%. The oil market rebounded on average by 34% in the year following those sharp declining years.”

Hirayama admits the range is wide and the data set is limited. Nevertheless, here’s a look at the 6 prior episodes compared to the present one (data from FactSet): 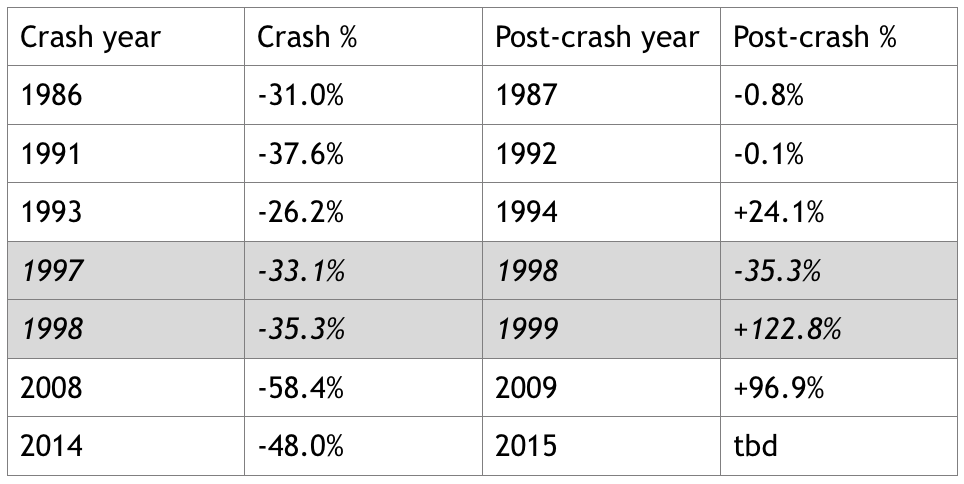 As you can see, calendar years in which oil crashes have sometimes been followed by sharp reversals to the upside. In the case of 1997-’98, oil crashed hard for 2 consecutive calendar years, falling 56.7% overall, before spiking by 122.8% to finish 1999 slightly higher than its pre-crash level on 1/1/1997.

We all see #3 happening today. #2 is also likely to occur, if not already occurring, in my view. As for #1, OPEC members are surely feeling the “fiscal pain,” but they have not yet reduced production. To my knowledge, they show no signs of doing so. Given the dramatic shift in oil supply (thanks to developments like the US shale boom), many industry experts question whether OPEC could influence oil prices much even if the cartel does move to cut supplies. Perhaps in this way, this time could be different.

Finally, Sam Stovall, U.S. Equity Strategist at S&P Capital IQ, reported a corollary insight regarding oil company stocks in a Barron’s article back on 12/1/2014. Stovall pointed out that, historically, a strategy of buying and holding energy stocks immediately AFTER the sector suffers a sharp drop has paid off. Stovall notes that the S&P 500 Energy Index, which powers the Energy Select Sector SPDR (XLE), has lagged the S&P 500 as badly as right now just 6 other times since 1990. Fast-forward two years after each instance and the energy sector traded higher every time; and in 5 out of the 6 instances, energy stocks beat the S&P 500 over that two-year stretch.

The bugaboo in that analysis, of course, is that oil stock’s outperformance begins after the big drop. Who knows when the carnage will end? If only we knew that, we’d know when to buy, right?

The bottom line is this: as you can see, a lot of people are starting to think ahead about a possible V-shaped rebound. I could’ve quoted many others who are calling for oil prices in 12 months to be in the $50-70 range, or $60-80. Those predictions seem to be the most popular. Which probably means they’ll miss the mark. It should be an interesting 2015!

In other news, I thought I’d provide a summary of government and regulatory news from the past week or so. It’s been a busy last few days.

Last Sunday, the Obama administration’s Interior Department proposed extending the drilling ban in Alaska’s Arctic National Wildlife Refuge (ANWR) by an additional 6 million acres, to about 13 million acres total – including about 1.5 million acres of oil-and-gas-rich coastal plain. Then on Tuesday, the administration extended a near-total development ban on 9.8 million acres in Alaska’s Arctic waters (in the Beaufort and Chukchi seas), for at least another 5 years (through 2022). These moves come just one month after President Obama indefinitely extended a drilling ban in 32.5 million acres in and around southwestern Alaska’s Bristol Bay – a less controversial decision, to be sure (due to Bristol Bay’s vibrant fishing industry and denser population, among other things). Still, previous administrations have mulled opening small, less environmentally impactful corners of Bristol Bay to drilling. Even that is apparently off the table now. All of this comes after the administration in 2010 closed down nearly half of the 23.5 acre National Petroleum Reserve Alaska (NPRA). The Wall Street Journal called these policy actions an “effort to bolster (the administration’s) environmental legacy,” and further reports that the Alaska oil pipeline has seen volume slow to 500,000 barrels per day, from 2.2 million “in its heyday.”

In case you’re wondering, this is a BIG deal in Alaska. From the WSJ: “An estimated one-third of Alaskan jobs are oil-related, and the oil industry accounts for some 85% of state revenue.”

And, of course, the state is already suffering from low oil & gas prices. The areas in question are believed to hold about tens of billions of barrels of oil (ANWR weighs in at around 10.3 billion, for one). Many energy companies have big money invested in the region, and are also eager to drill, baby, drill. To be sure, ANWR has been off-limits to development almost since the reserve was created in 1960. For most of those years, Alaska lawmakers have clamored to open the region to drilling. Rep. Don Young (R-AK) was quoted as saying the Obama administration’s new proposal “is akin to spitting in our faces and telling us it’s raining outside.” Sen. Lisa Murkowski (R-AK) said, “It’s clear this administration does not care about us.” The WSJ reports Congress must approve wilderness designations like the proposed ANWR status, and this Republican-led Congress is highly unlikely to rubber-stamp this one. Yet the proposed regulatory structure, at present, is effectively the law of the land until anything happens to officially change it.

On Tuesday (the same day Interior slammed the door on offshore development in Alaska’s Beaufort and Chukchi seas), the Department proposed opening to offshore drilling an area stretching from Virginia to Georgia. Interior Secretary Sally Jewell called the regulatory structure a “balanced approach,” protecting areas that are “just too special to develop” (i.e., Alaska). Environmentalists, for their part, voiced strong opposition to the Virginia plan as well. Interior estimates the mid- and south-Atlantic hold about 2 billion barrels of undiscovered, recoverable oil. Other sources say the official estimates are probably low, but no one believes the potential could possibly rival Alaska’s.

On Thursday, the Senate approved Keystone XL pipeline on a 62-36 vote (including 9 Democrats). The House passed a similar bill earlier this month. Once the slight differences between the 2 versions are reconciled, the bill will go to President Obama’s desk. The President has promised (repeatedly) a veto. The Senate would need 67 votes to overturn a veto.

Finally, on Wednesday, the House passed a bill to expedite permits for natural gas exports, on a 277-133 vote. The bill now faces the challenge of passing the Senate and obtaining President Obama’s signature.

I told you it’s been a busy week! But the fun is far from over. Miscellaneous and assorted other rules and regulations are reportedly still in the works, related to Alaska, fracking, emissions, etc.

For now, though, hang on tight as we head into the thick of earnings season.

2 thoughts on “The History & Likelihood Of V-shaped Oil Recoveries”