Yesterday, Apple Inc. (NASDAQ:AAPL) finally had its day in the sun and unveiled its new smart watch for the second time. The whole event went off without a hitch and was very Apple-esque in all the different presentations. The only item that caught my eye was the Macbook, which is a new design and is like a work of art thanks in large part to Sir Jony Ive, Apple's chief design guru. While many of the products shown at the event received polite applause, Apple's stock elicited a big yawn, as many of the features had been seen earlier. Another kicker was if you want to get a smart watch, you're going to have to wait for at least another six weeks. 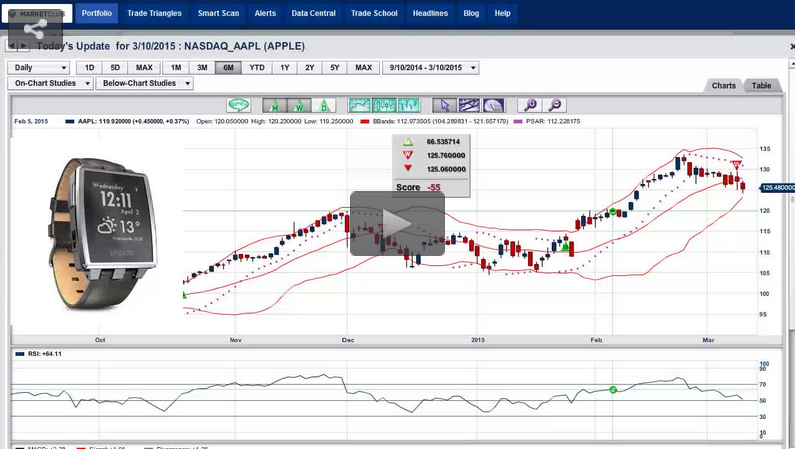 Yesterday, we ran a poll that showed only 14% of the people who responded would consider buying an Apple watch, and that was before prices were announced. My best guess is Apple's going to sell a lot of watches, but not the 14 million they think they are going to sell in the first year.

Looking at how Apple's stock acted to yesterday's presentation by Tim Cook, I would have to say that the market was somewhat underwhelmed.

In today's video, I'm going to be taking the pulse of several different markets and determining what I think is going to happen based on the Trade Triangle technology and some other technical indicators.

Bull markets do not go on forever, they frequently have corrections that offer great buying opportunities. Not only did Apple hold its special event to showcase its smart watch yesterday, but the stock market also celebrated the birthday of its six-year bull market run. As bull markets go, this one is beginning to look long in the tooth.

So the question is, is the market heading into some dangerous waters? Is the high dollar finally hurting multinational corporations? Is the European situation with Greece going to implode? What about the all the problems in the Middle East? And last but not least, when will the Fed raise interest rates?

Time permitting, I will also be looking at some stocks that I think are interesting in light of the current changing economic climate.

A big thank you to all of the members who participated in yesterday's Apple watch poll. We appreciate the time taken out of your busy day to share your thoughts with us and your fellow members. As always, please feel free to leave a comment below this posting or any posting on this blog. We always enjoy hearing from you.