Personally, I am so excited for our INO Cares campaign this month. I was asked to select my favorite non-profit and this decision took less than 1/1000th of a second - The National Multiple Sclerosis Society.

Last year at only 27, my little sister, Casey Thompson, was diagnosed with multiple sclerosis. It started with tingling in her hands and feet. Then the fatigue and dizziness set it. She knew something was wrong, but Multiple Sclerosis wasn't even on her radar. After more severe symptoms appeared, doctors suspected MS and Casey was in and out of the National Institute of Health meeting with some of the world's best Neurologists and MS specialists. She was diagnosed with relapsing-remitting multiple sclerosis (RRMS) which is characterized as clearly defined attacks of worsening neurologic function. 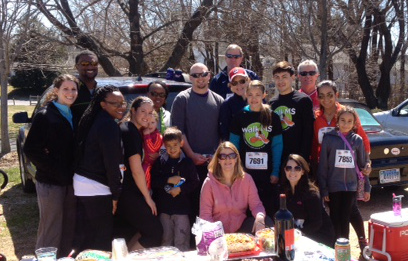 My sister, who is an athletic trainer and concussion care specialist, has always been an active person with an interest in physical fitness. So, having a disease like MS is particularly difficult. Not only does she have to power through times of severe fatigue, decrease in cognitive function and general pain, but she also has the emotional ups and downs that come with the unknowns of a life with MS.

Last year, my family and her friends did Walk MS to raise funds and awareness for Multiple Sclerosis in Casey's honor. This year, Casey decided to take on a more physical challenge. She will be running the Fredrick 1/2 Marathon, barring any major MS flare-ups, on May 3, 2015.

She is a strong woman, and honestly MS is not the hardest thing in life that she's had to deal with. But MS is scary and it's hard to not worry about what life will look like tomorrow, let alone what it will look like 10 years from now. However, Casey is not letting it stop her and she's determined to never use it as an excuse. Instead, MS is motivation and the Fredrick 1/2 Marathon is a way to raise money for MS research, challenge herself, preserve her body through fitness and show MS that it won’t stop her from reaching her goals.

For our March 2015 campaign, INO Cares is proud to sponsor Casey as she races in the Fredrick 1/2 Marathon and raises money for multiple sclerosis research!

I hope to give you a marathon follow-up in May.

Here's to making the world a more compassionate place,