Oil's free-fall hasn't been kind to offshore or onshore drillers. A quick look at the Energy Select Sector SPDR (XLE) is evidence of weakness in the industry. 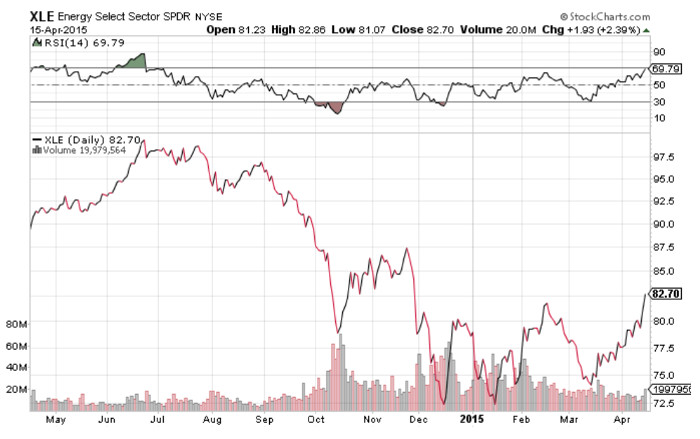 Since the summer of last year, oil has fallen from over $100 per barrel down to to less than $45 per barrel. For the past few weeks though, oil has been on an uptrend. It now stands at around $56 per barrel and investors are clamoring to get back into the very stocks that were sold off over the past several months.

Fueling the recent gain is the news that oil inventories only rose 1.3 million barrels in the latest U.S. data report, the smallest increase seen since January 2nd and far short of the 4.1 million barrels that most analysts had predicted. It's a good sign that we've finally seen the bottom in oil and are now seeing the bounce back off of those previous lows.

While oil could still track down before ultimately heading back up, there appear to be more tailwinds for the commodity than headwinds. The energy sector is beginning to look overbought as evidenced by XLE's RSI rating of nearly 70 so there could be some short term volatility. However, OPEC is rumored to cut back production this summer which could ultimately lift oil above $60 per barrel and permanently off its sub-$50 lows.

Finding a strong oil company amidst the chaos going on with oil prices requires that we identify a few key items. The company needs to have high margins to absorb higher production costs and little or no debt liabilities that could sink an otherwise healthy company. One company that meets these requirements and more is Helmerich & Payne (HP).

This $8.3 billion oil and gas driller hasn't escaped the pain of the oil industry. The stocks performance over the past year is -25%. Looking at it for the past month though, it's up over 21%. 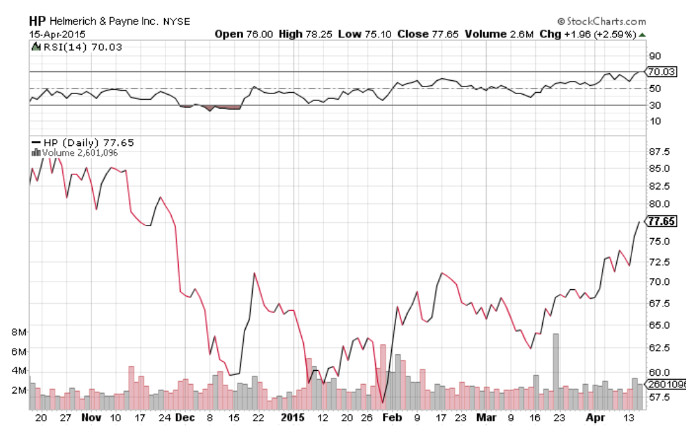 Like the XLE ETF, Helmerich looks overbought with a RSI of 70, but any short term pullback could be a huge buying opportunity for value-minded investors.

Helmerich and Payne is the leading oil and gas driller for the U.S. market constituting a 17% share with Patterson-UTI Energy (PTEN) being the second largest at 13%. The company has done a good job stacking rigs and as of March 15th, only has 190 active – down from 294 at the start of 2015. Now that the excess capital expenditures have been dealt with, Helmerich should be in a position to grow.

One of the biggest positives the company has going for it is its relatively high margins. It has an operating margin of over 28% – well above that of peers like Nabors Industries (NBR) at just 9%. This allows Helmerich to be flexible when it comes to operating and production costs and can easily absorb the volatility we've been seeing in oil. Helmerich also has almost no long term debt liabilities to speak of at $40 million while cash holdings are in excess of $251 million.

Investors get downside protection in the form of a 3.5% dividend yield as well. While there have been some concerns that the weakness in oil may force Helmerich to cut its dividend, it seems an unlikely scenario given that the company has steadily increased it for the past 42 years and only has a payout ratio of 39%. Given the strength of its balance sheet, I think it's safe to assume that the company will continue paying its dividend out regardless of where oil is trading right now.