It’s spring, and the cherry blossoms are in full bloom in Japan, the “Land of the Rising Sun” and home to the Japanese Yen. While many view spring as a time for new beginnings, from a more practical and economical perspective, it’s also means a new fiscal year in Japan, thus this is an ideal time to review all the data and attempt to gauge the Yen’s next trajectory. Of course, many want to know if the Japanese currency is facing yet another meltdown. While it is a rather straightforward question, with a seemingly straightforward answer, the fact is we must delve deep into complex issues including the mechanics of Quantitative Easing, Japan’s public debt and inflation.

Now that you understand a bit more about QE and the rationale for it, it’s time to examine Japan’s problem and why its QE is, essentially, ineffective. As seen in the estimates below, the net debt of the US government is much smaller than the outstanding debt of the private sector with 78.06% of GDP vs 192.3% of GDP, thus there is plenty of liquidity left over for the private sector. But when examining the same ratios in Japan, the results are atypical; Japan’s net public debt, at 153.9% of GDP, is almost as large as net borrowings to the private sector, which itself is 188.3% of Japan’s GDP. This means that a substantial portion is allocated into the government rather than the private sector which explains Japan’s constant tendency toward deflation. In other words, Japan’s sovereign debt is just so big that it sucks the liquidity from the private sector. This is why inflation in Japan, despite the BOJ’s efforts, is not being generated, and in reality is set to fall back to zero if we neutralize Japan’s sales tax increase.

Is the BOJ doing enough?

On the face of it, the Bank of Japan’s QE is considered aggressive at roughly $700 billion (of course, Yen equivalent) a year in liquidity. That may seem an awful lot but in reality it’s not because while the BOJ has increased its annual balance sheet by nearly $700 billion, Japan’s sovereign debt is poised to rise by $812 billion. This means that, at the moment, the BOJ’s current QE program would not lead to an increase in the total liquidity made available for the private sector; rather, it merely preserves the status quo. Simply stated, the BOJ is not doing enough.

What This Means for the Yen

The risk that Japanese inflation will slide back into negative territory is still running high and that means that the BOJ might find itself forced to increase its QE program even more to tackle deflation and to make any meaningful impact. However, since QE is already the subject of numerous heated debates in Japan, BOJ Governor Kuroda might decide to wait a bit longer this time before reacting. The result? The Yen is still set to weaken much further but short term volatility could emerge. If we narrow it down to numbers, the monthly USD/JPY chart indicates that the next long-term target for a bullish cycle seems to be 135, while also indicating medium term support for the pair is around 115. This means that unless there is a global crisis that causes an uptick in safe haven demand, the fundamentals suggest that the Yen’s meltdown is still far from over and could eventually take us all the way to 135, with possible corrections along the way. 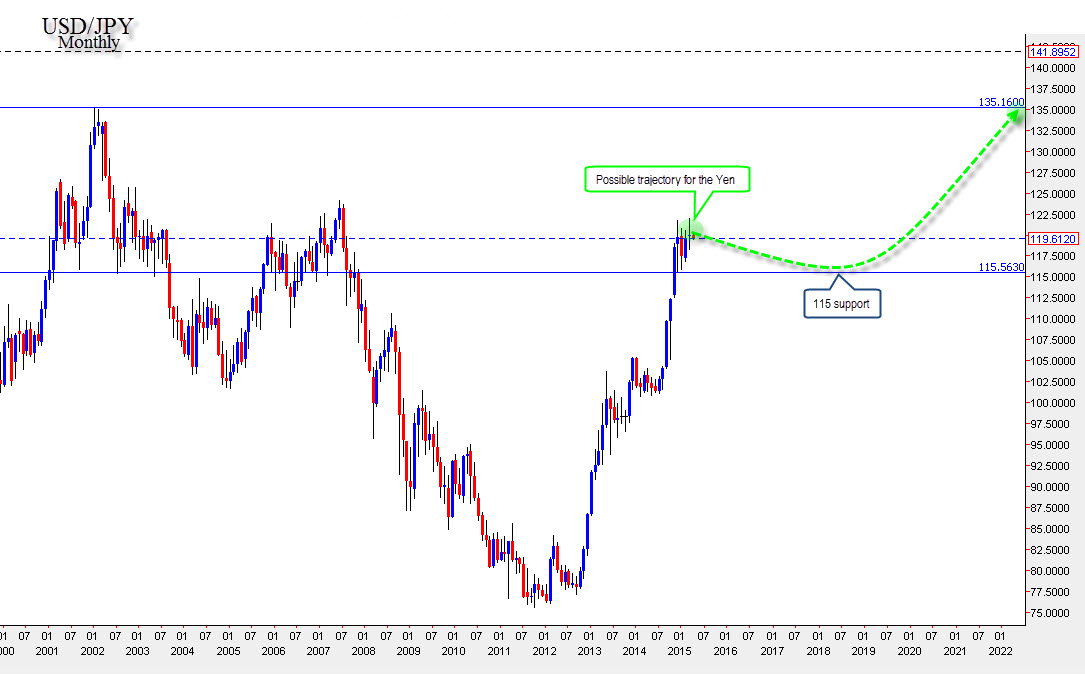