In forex trading, trade with the trend. Trends last a long time and tend to go further than people expect. Those who bought the EURUSD above 1.39 less than a year ago can attest to that, with the pair having traded as low as 1.0462 in March.

The U.S. Dollar (USD) isn't just strong against the Euro; it's strong against nearly all currencies, major and minor. For trades lasing longer than a few weeks, trading on USD strength--in alignment with the trend--is still the main play.

The USDCAD, NZDUSD and USDCHF are in a slightly different position though. Trading in the direction of USD strength is still a possibility, yet it's wise to have a few pairs to trade if the USD reverses. If the USD reverses, or even sees a deeper pullback, it is likely to be showcased in these pairs first. In fact, it has already begun.

The USDCAD hasn't given up much ground this year (relative to many other pairs), as it channeled between resistance just below 1.2840 and support just above 1.2350.

On April 15 the USD broke strongly lower, breaking that sideways channel. Given the strong move down the short and intermediate trends are now down, based on the trade triangles. Wait for a pullback higher to get short though, ideally near the old channel breakout point of 1.2350. Based on the size of the range, an initial target goes at 1.1850 and a stop loss can go above a recent swing high. 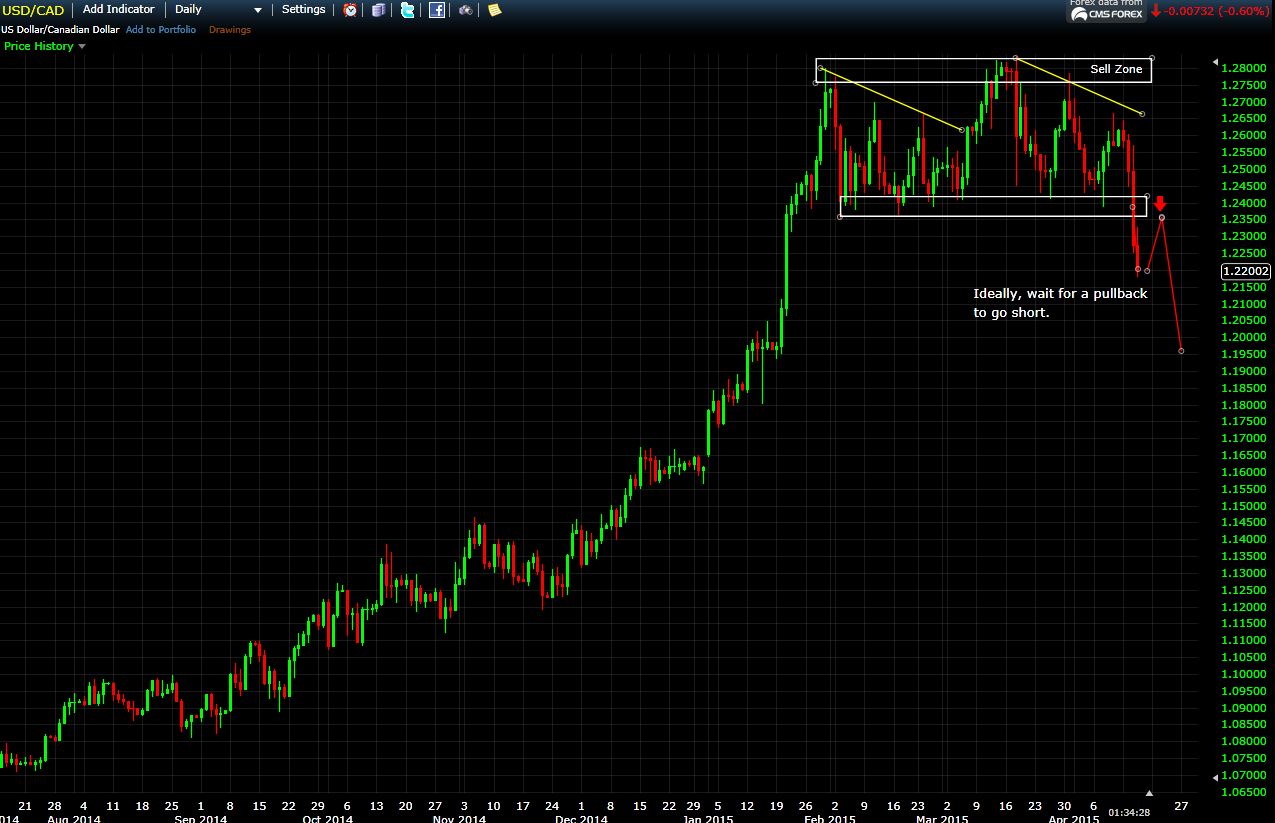 Even with the long-term trend down, with the price making higher highs and higher lows, this isn't a pair worth shorting (at the moment). If you want to buy the USD, there are better ways to do it than by shorting the NZDUSD.

Unless the intermediate trend shifts back to the downside, avoid the short, but be prepared for a potential long.

If the price continues to move above 0.7650 it will break a descending trendline going back to October. If the price can surge through that area (above 0.77) it will also break through an old support area which is now providing resistance. Taking the trade long near 0.7650 or 0.77 is one option, but not ideal. Wait to see if the price runs higher; if it can push up to 0.7850 that creates a much more bullish scenario, where the long-term trend is likely reversing. In this case, look to buy on a pullback to the 0.77 to 0.7650 region. Initial target is 0.8050--based on a conservative measure of the range, added to the breakout price of 0.7650--and a stop loss can go below a recent low. 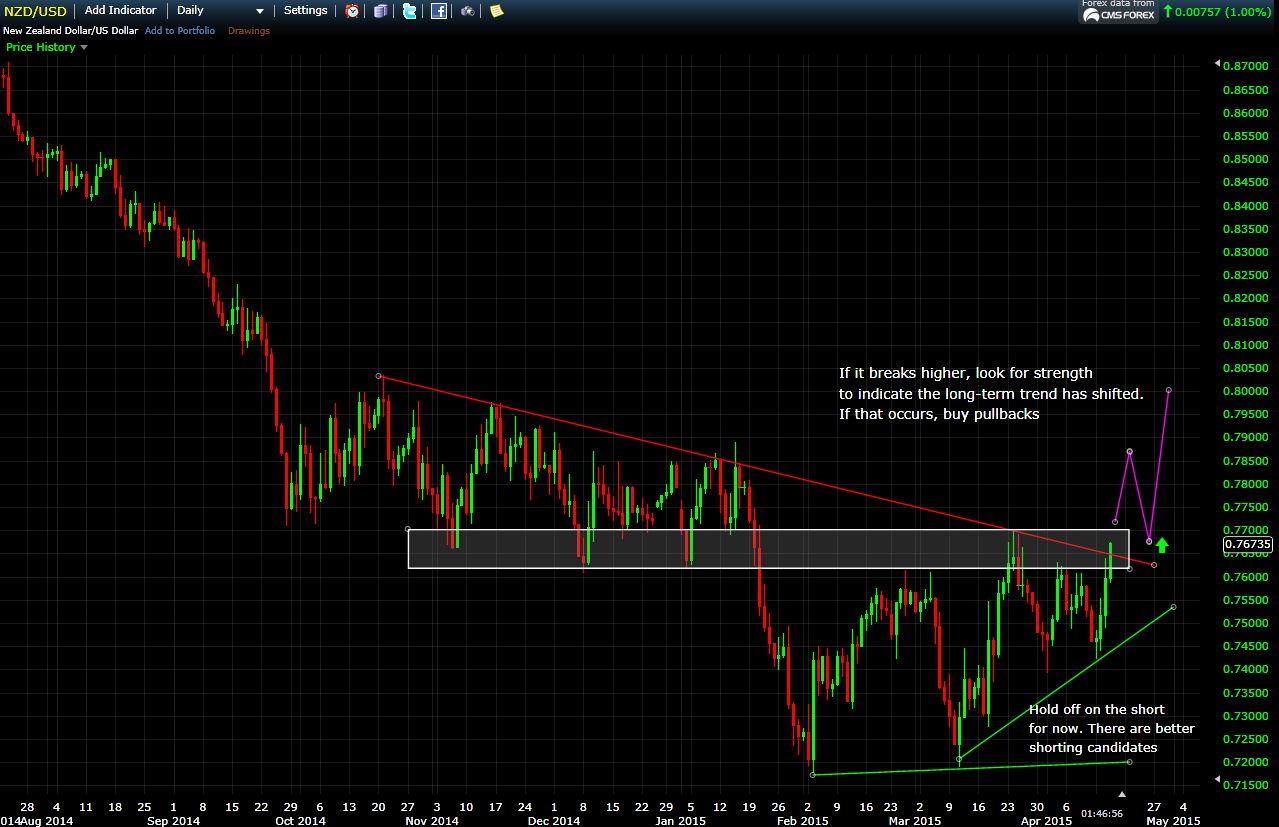 NZDUSD Trade Triangles show the long-term trend still down, with the intermediate and short-term trends up.

In the case of the USDCHF, a full reversal has occurred. The unprecedented selloff in January was not fully retraced--even by the strong rally in February and March--creating a lower high in March. Since mid-March the pair is falling again. The long-term direction in this pair is questionable, but currently the USD is losing ground versus the CHF. The main problem in this pair is finding a high probability trade. The best opportunity occurred in March when the price briefly rallied to the January breakout point (1.0118)--a high probability strong resistance zone since a massive amount of pain (huge losses in a very short amount of time) commenced at that level. Another wave or two should produce a more defined direction, and offer up some higher probability trade areas. 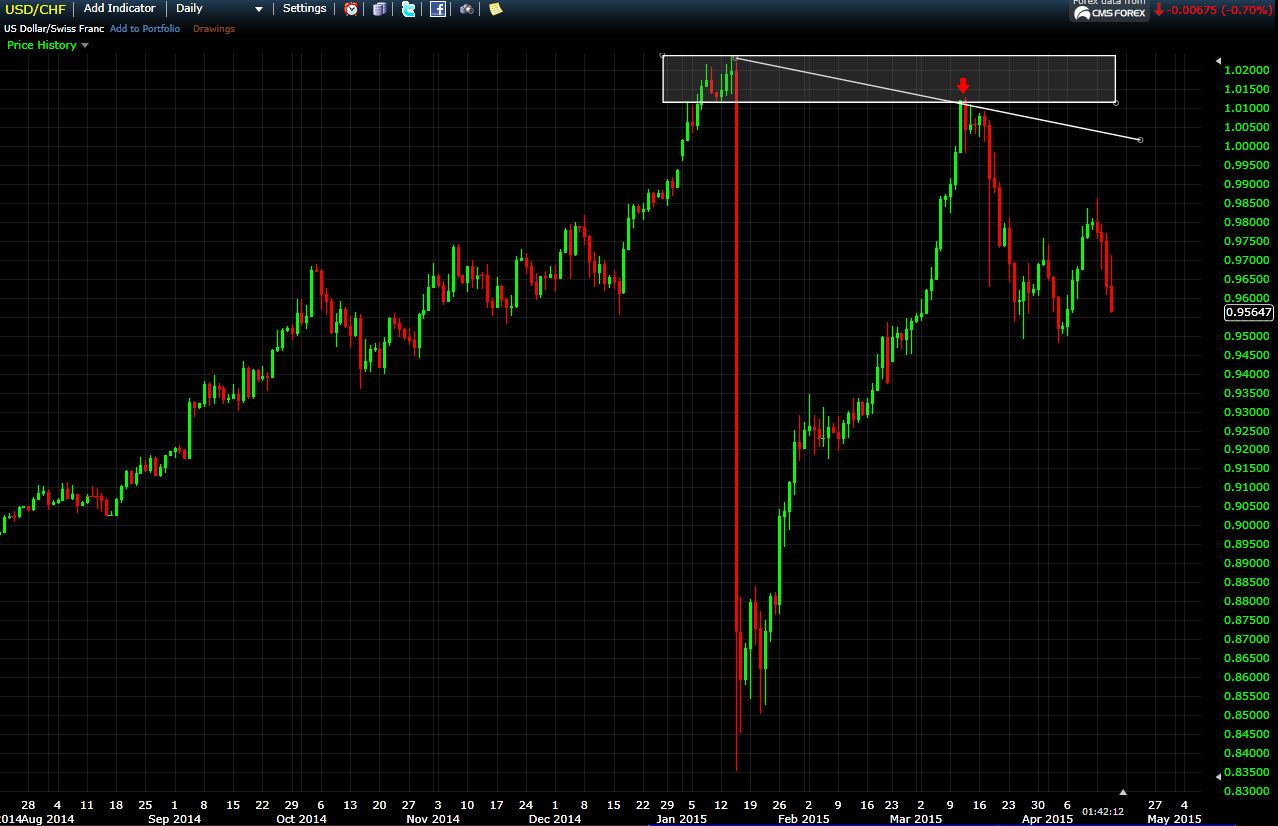 USDCHF Trade Triangles show the long-term trend down, the intermediate is up due to the very strong February/March rally, and the short-term trend is down as the price is currently dropping again.

Trade with the trend, but have trades planned for if the trend reverses (on whatever time frame you trade). Some planned trades may never come to fruition, but the act of planning makes sure you're disciplined and prepared for anything. As more price data is revealed, entry points, targets or stop losses may need to be adjusted, or trades abandoned altogether (and new plans hatched). Be adaptable.

The USDCHF long-term trend has already reversed, now traders must patiently wait for the next opportunity to get in. The USDCAD and NZDUSD still have the USD in a long-term uptrend, but a slide in the USD will change that. These pairs present opportunities to trade that reversal, should it occur. Use stop loss orders to help limit risk; make sure each trade taken provides a greater than 2:1 reward-to-risk ratio given reasonable profit target expectations; and only risk a small percentage of capital on any single trade.

Cory Mitchell is an independent trader focusing on short to medium-term technical strategies. He's a Chartered Market Technician (CMT), founder of VantagePointTrading.com, the author of the Forex Strategies Guide for Day and Swing Traders eBook and issues a free weekend newsletter with stocks, currencies and futures to watch (as well trading tutorials).

One thought on “Three Currencies To Watch Versus The U.S. Dollar”