Yesterday, the weekly Trade Triangles flashed warning signs on both the S&P 500 and the NASDAQ. This is the first indication we have had indicating that the intermediate-term trend for both of these indices has turned negative. 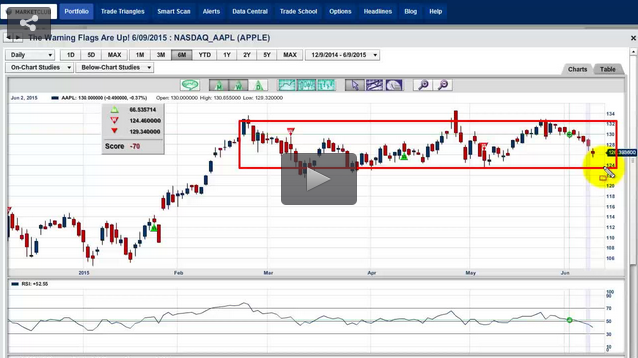 Now before you go selling everything, just remember this is not a major signal, it is just a warning sign that things may be going sideways to lower for a while. Look at the weekly Trade Triangles like the canary in the mine - if you don't exit the scene, there could be bigger trouble later on.

As many of you are aware, the markets have been moving sideways for quite some time now without any real solid direction. When you look at the broader picture, it would appear as though we are in a wide trading range, bound by the recent highs and lows that were seen in late March.

Having said that, I would not be surprised to see a market bounce today as I have seen pressure on this market for the last several days. It is still too early to say that the major indices have created a top as the monthly Trade Triangles remain in a positive mode.

Yesterday was the start of WWDC15, Apple's annual Worldwide Developers Conference. During the conference, Tim Cook, the head of Apple, showcased several updates to their desktop operating system which will now be called El Capitan, along with updates for both the iPhone and the Apple watch. The big news that was leaked days earlier is that Apple is going into the music subscription business, offering all the music you can play for $9.95 a month. All of this razzle-dazzle did not have much of an impact on Apple's stock yesterday which closed down .63%. Like the major indices, the intermediate trend for Apple is down while the longer-term trend for the stock remains positive.

I'll be looking at Apple Inc. (NASDAQ:AAPL) today and showing you exactly where the intermediate-term Trade Triangles will turn positive.

I will also look at two other stocks that gave buy signals yesterday. They are SouFun Holdings Ltd. (NYSE:SFUN) and Mankind Corp. (NASDAQ:MNKD).

One thought on “Caution Advised, The Danger Flags Are Up!”