A missed quarter is often an opportunity for value investors who know how look to the future rather than the short term. A temporary stock hit can mean getting a discount on a company that could turn around and post out-sized profits down the road.

For a food production company, weakness can come from a number of sources such as higher livestock costs, grain costs or import costs. However, one fairly steady constant is the demand for food itself. Rather than being subject to supply and demand curves or the whims of the business economic cycle, a food producer will always have a solid customer base that's always growing as the global population rises. Regardless of the state of the economy, food will always be in demand making it a solid investment choice over the long run.

For one company, an earnings miss and export market disruptions could be a boon for investors who are looking to buy a stock on sale. The road might be bumpy right now, but solid management and temporary cost issues make this company a winner.

Tyson Foods (TSN) is a $16 billion food production company best known for its brands like the eponymous Tyson Foods label, Jimmy Dean and Hillshire Farm. The company has over 100 locations in the U.S. and across the globe with more than 124,000 employees.

Tyson reported disappointing 3rd quarter earnings earlier this month with $0.80 per share versus the expected $0.92 analysts had estimated. Revenue was also short coming in at $10.1 billion rather than $10.31 billion. The miss dragged the stock lower following the announcement although it's still up 5% year-to-date.

The earnings miss was mostly attributed to a loss in the beef segment due to higher cattle costs. That caused a $84 million shortfall in the largest segment of Tyson's business and will likely affect next quarter as well. However, the company has been striving for a more balanced portfolio with last year's acquisition of Hillshire Farms, which means the negative disruptions in the beef market won't have as large an impact on 2016.

The addition of Hillshire proved to be profitable one this quarter with the company's prepared foods segment showing a 77% increase in sales for the quarter helping to assuage some of the pain from the beef segment. And that's not the only positive takeaway that investors missed following the earnings miss.

Adjusted operating income was up 40% year-over-year and hit a record high of $568 million while cash flows similarly reached record highs of $864 million. Operating margins grew as well to 5.6% led by the chicken segment at 11.4% and prepared foods at 10.9%.

Taking a look at Tyson's chart, we can see how the stock was knocked down after the earnings miss. 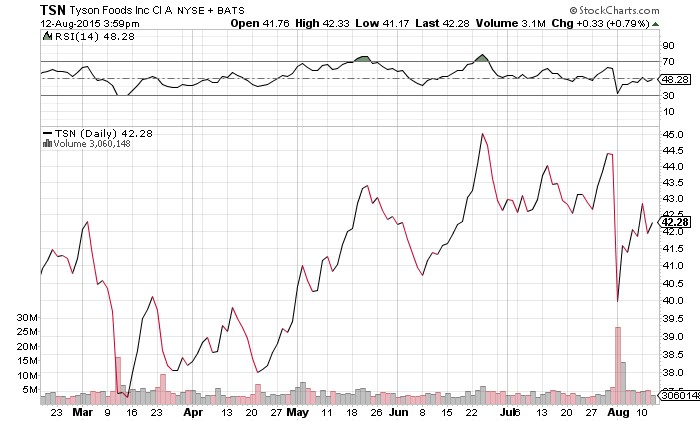 Notice how quickly it rebounded off its lows. That's a good sign that the stock won't be going any lower which seems confirmed by the RSI reading of 48.28. That means it's neither overbought nor oversold and should be a good entry point for value-seeking investors.

The stock looks cheap right now trading at just 13.4 times earnings with a long-term EPS growth rate of 9.8%. The average for food production companies is a P/E of nearly twice that at 26.5 with a slower long-term EPS growth rate of 8.4%. The stock also comes with investor downside protection in the form of a 0.95% dividend yield and a share repurchase program with 27.9 million shares still available for buybacks.

Even with the lowered guidance for 2015 of $3.10 to $3.20 per share, Tyson Foods looks like a bargain. Factoring in segment growth and improving margins, this stock should be trading at about