Are we set for a rerun of the 1997 Asian Financial crisis? Well, as Mark Twain said once, history does not repeat itself but it rhymes. The current turmoil does strikingly resemble that of the original 1997 Asian financial crisis. However, unlike the 1997 crisis, today’s circumstances are quite different.

What initiated the Asian financial crisis back in the 90s? Well, it was the culmination of many things. Primarily, though it was the inability of Asian and other emerging economies to finance themselves. This was generally due to large current account deficits which led emerging markets to accumulate foreign debt. Eventually, they become dependent on foreign creditors.

When investors’ appetite for emerging market debt waned, those Asian economies had difficulty financing themselves. And let’s not forget Russia, which, coupled with its own circumstances, was pushed to default.

Then, the key “players” in Asia’s financial saga were Thailand, Indonesia, Malaysia, South Korea and Russia. All became insolvent and were forced to accept an IMF rescue. Russia’s default (after the Soviet Union breakup and Japan’s credit burst) significantly dampened appetite for risk. As a result credit flows to Asian economies and emerging markets in general also waned.

So, how are the current players of the crisis looking? As the chart illustrates, some economies (South Korea, for example), are out of the danger zone. Those economies have very low levels of external debt. But, some things never change. Malaysia, Thailand and Indonesia hold a relatively high ratio of external debt. Once again, that makes them a weak link among their peers. That means that as the emerging market rout continues, those countries (and currencies) are targets for short sellers. They will likely be pushed to the brink once again if the crisis escalates. 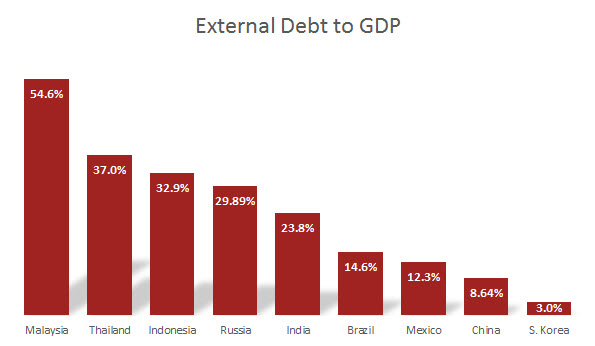 Despite recent economic sanctions and fallout from the Oil and Gas price collapse, Russia is not in the same dire state. Back in 1997-78, the Russian government was burdened by debt accumulated by the Soviet Union (which had just been dissolved). Moreover, Russia’s oil and gas facilities were in shambles, as compared to today. That left the Russian government with very little income and a high burden of debt. Today, Russia can still rely on Oil and Gas revenues to keep it afloat.

But, and this is a very big but, Russia still has a relatively high external debt to foreigners of roughly 30%. That’s not as severe as Malaysia or Thailand. However, Russia is blocked from Western financial markets thus it cannot raise debt as effectively. That makes its foreign debt less manageable. So while Russia’s situation is not as grim as it was in the 90s, the country is certainly one of the weakest links in the current crisis. If it continues its current path, default, not immediately but eventually, could be on the table.

This current crisis certainly “rhymes” with the crisis of 1997. An external debt analysis suggests that while it is a risky situation (especially for Russia) it’s not yet at a breaking point. Most of the larger emerging market economies still have low external debt. While that leaves their respective currencies exposed to shocks, their governments are not prone to default.

One thought on “Asian Financial Crisis: Now and Then”