I happened to notice Oceaneering International (NYSE:OII) is flashing 3 green triangles on MarketClub.

This is a stock that last saw its shares trade at $86 per share on November 4, 2013 (almost exactly 2 years ago), hit a low of $37 on August 25 (almost exactly 2 months ago, on the same day the broad market touched its recent bottom), and is now changing hands at nearly $47. 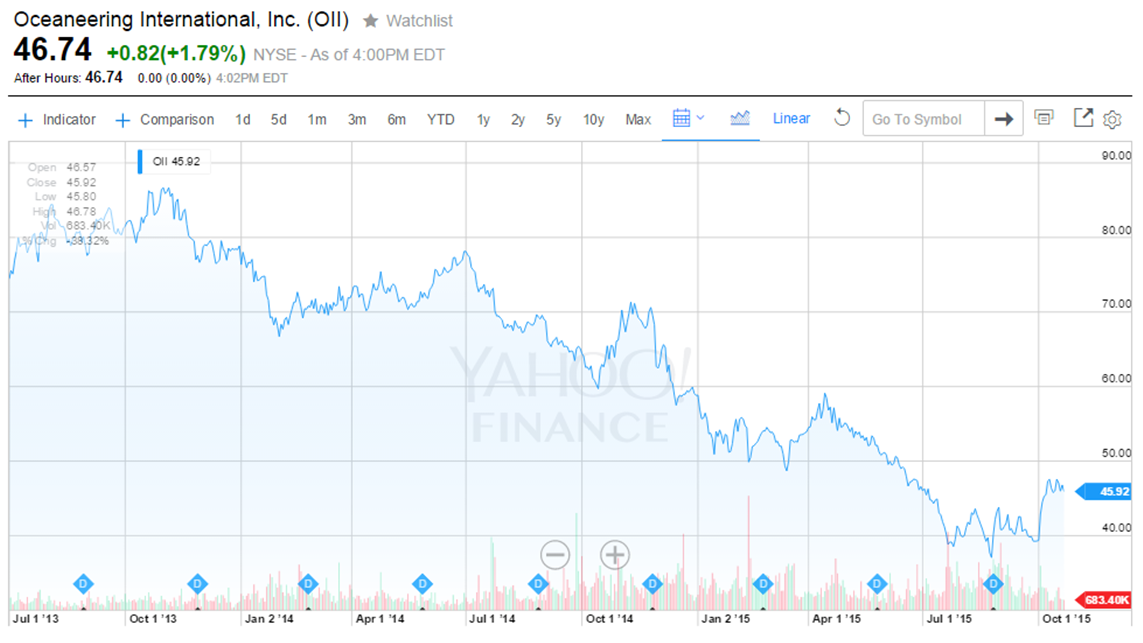 Why should you care? Well, I don’t know that you should, seeing as how Oceaneering is in the business of providing engineering services primarily to deepwater drilling companies, which doesn’t exactly seem like a hot corner of the market these days. But…

As I said, Oceaneering’s recent bump has turned all 3 of its MarketClub triangles from red to green since October 5th. Furthermore, Oceaneering enjoys some nice votes of confidence from several analysts. I’ll highlight some key points from some of those reports.

In an October 17 analysis, S&P Capital IQ places Oceaneering’s “Investability Quotient” at the 97th percentile (“higher than 97% of all companies for which an S&P Report is available”). S&P’s “IQ” score is designed as “an indicator of potential medium- to long-term return” that also incorporates an assessment of downside risk. “IQ” encompasses “technical indicators, earnings estimates, liquidity, financial ratios, and selected S&P Capital IQ proprietary measures.”

In evaluating the Oil & Gas Equipment Services industry for S&P’s report, Stewart Glickman, CFA, admits a negative fundamental outlook over the next 12 months, as offshore drilling customers continue pulling in the reins on capital expenditures. However, Glickman states, “We still view the long-term growth rate in upstream capital spending as a secular positive.”

Glickman continues that with oil under $60 per barrel, larger existing offshore projects “will continue to proceed,” but with a shift towards “growing profitable production” vs. the old emphasis on purely “growing production.” New drilling projects, S&P concedes, are much “less likely to be pursued.”

As a subscriber to Motley Fool, I happen to know the publication has stuck with its Oceaneering recommendation ever since initiating it in November 2011. Fool continues to rate OII a “buy.” Fool’s current featured analysis of Oceaneering offers its main reasons for the recommendation, as summarized (by me) here:

• Oceaneering enjoys a dominant position in the industry. For example, the firm secured contracts to service 5 of the 7 new offshore rigs to come online in Q1.

• Utilization rates for offshore rigs remain at nearly 90%, and Oceaneering continues to enjoy tremendous market share for servicing those rigs.

A couple mutual funds managed by Villere initiated relatively concentrated positions in Oceaneering during the 1st quarter, offering the following commentary after the fact:

“Looking to diversify our energy exposure, we took a new position in Oceaneering, a successful service company that repairs and maintains offshore drilling equipment through state-of-the-art underwater robots. Even if oil settles out at $30 a barrel (it ended the quarter around $50 a barrel), cost-efficient oil rigs maintained by Oceaneering are still likely to turn a profit.”

More about the company

According to Oceaneering International’s website, the company turned 50 years old last year, having started as a diving company in 1964. The firm has been a continual innovator, and has now manufactured and is able to use the industry’s largest fleet of remotely operated vehicles (ROVs), which service underwater rigs at extreme depths, piloted by employees located safely on land.

The company has roughly a $4.6 billion market capitalization, and its stock pays a 2.3% dividend yield. Oceaneering started paying dividends in 2011 and has raised its dividend 3 times without ever having made a cut. For the 12 months ending June 30, 2015, Oceaneering’s payout ratio stood at 30% of earnings – not outrageous at all, and in fact, somewhat more conservative than competitors like National Oilwell Varco (NOV) and Core Labs (CLB).

Obviously, Oceaneering’s stock has been affected by the severe crash in oil prices. What happens next with oil prices is anyone’s guess.

The International Energy Agency’s (IEA’s) October oil report said, “A projected marked slowdown in demand growth next year and the anticipated arrival of additional Iranian barrels … are likely to keep the market oversupplied through 2016.”

The WSJ Energy Journal, on Thursday, said: “The U.S. Energy Information Administration reported Wednesday that domestic crude oil inventories expanded by more-than-expected 8 million barrels last week. Inventories in the U.S. remain near levels not seen for this time of year in at least the last 80 years.

“Analysts and energy watchdogs say the economic slowdown in China and other Asian nations likely will cut demand even as the oil-price decline has boosted use among motorists, consumers and companies.”

So the IEA and the WSJ’s reporting point to continued oversupply and sluggish demand leading to weak oil prices.

Offshore drilling is very expensive. Deepwater drillers, in particular, require high oil price levels in order to break even on operations. Yet while the drillers may not pursue new projects anytime soon, they’ll continue operating, and will, therefore, continue needing services from companies like Oceaneering. After all, Oceaneering brought in nearly $3.5 billion in revenue during the 12 months from July 1, 2014, to June 30, 2015 – all while oil prices crashed violently. That’s more revenue than Oceaneering took in during the calendar year (CY) 2013, and only slightly lower than its sales figures for CY2014.

Markets are highly efficient (if not perfectly so… a debate for another day). So at some point, the bad news of oil’s 60% crash since last June has to be priced into stocks like Oceaneering. It’s a dynamic situation, of course, which is why Oceaneering’s stock continues to experience wild swings.

Oceaneering will report earnings next Wednesday, October 28th. It’s always dangerous to invest before an earnings release, of course; especially with a stock that’s been as volatile as Oceaneering’s. Personally, I’d watch the announcement before investing, just to avoid volatility. If the stock skyrockets higher, perhaps I will have missed it. But I’d rather do that than risk money ahead of the report. Call me a chicken, I guess.

Disclosure: the contributor does not own the stock mentioned. This article is the opinion of the contributor themselves. The above is a matter of opinion provided for general information purposes only and is not intended as investment advice. This contributor is not receiving compensation (other than from INO.com) for their opinion.