I'm not sure how you're feeling, but I am feeling a little uneasy about where the market is trading particularly this week. Please don't misunderstand what I'm saying, I am not saying that the market is going to crash this week, nor am I saying that it is going to soar to new highs. It just all seems a little surreal and that's what is making me feel uneasy. 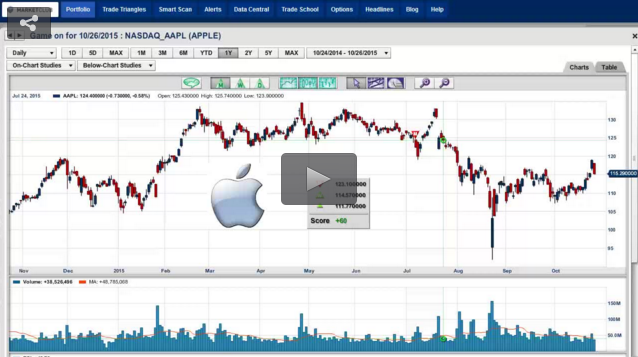 As I have mentioned before, the Trade Triangles are indicating a trading range scenario for the major indices. Intermediate-term traders should be on sidelines at this time. All of the major indices are close to butting up against resistance which should slow and halt any further upside progress from here.

Apple is set to report earnings

After the close on Tuesday, Apple Inc. (NASDAQ:AAPL) reports its Q3 earnings. This could be a game changer for Apple and also for the market. Judging by the market action especially today, I think the report is going to be somewhat neutral to negative and show little or no growth for their iPad and iPhone business. The Trade Triangles are saying that you should be on the sidelines right now and that's where I intend to be. The only thing that would move me off the sidelines is if I see a move below $109.50 either today or tomorrow. If that happens, then I'll want to be short going into the report.

Maybe that's why I am feeling a little uncomfortable this week about the market.

Look for the gold market to begin to regroup this week around current levels. I'm still positive on gold and expect that it will begin to move higher later this week.

I will be looking at three stocks that I believe are headed lower. The first one is Atmel Corporation (NASDAQ:ATML), the stock has witnessed a 62% correction and now looks to be rolling over to the downside. I'll give you some specific downside target zones.

The next stock going under the microscope is Ventas Inc. (NYSE:VTR). This particular stock created what I like to call "Twin Peaks", which is a very strong sign of a reversal.

The third and last stock DSW Inc. (NYSE:DSW) this stock is also acting on the defensive and looks to be headed lower in the future.

In addition to those three stocks, I will be also be looking at the euro, crude oil, gold and the three major indices.

One thought on “Is Apple Going To Upset The Apple Cart And The Market?”