In case you missed it yesterday, Alibaba Group Holding Limited (NYSE:BABA), took a 5% position in Groupon Inc. (NASDAQ:GRPN) which was enough to push this stock up 40%. Yesterday's action by Alibaba was seen as a black swan event that could not be predicted by any indicator. Groupon had been in a steady decline after hitting a peak of over $27 when it began trading. Since that time, the stock has steadily moved lower and recently traded perilously close to the $2 level.

As I have said many times before, perception is very important in stocks. The fact that Alibaba took a 5% stake in this company should not be overlooked.

Technically speaking all of the Trade Triangles turned green and positive yesterday for the first time in a long, long time. You also saw a 12 month downtrend line broken to the upside which also helped change Groupon's momentum. 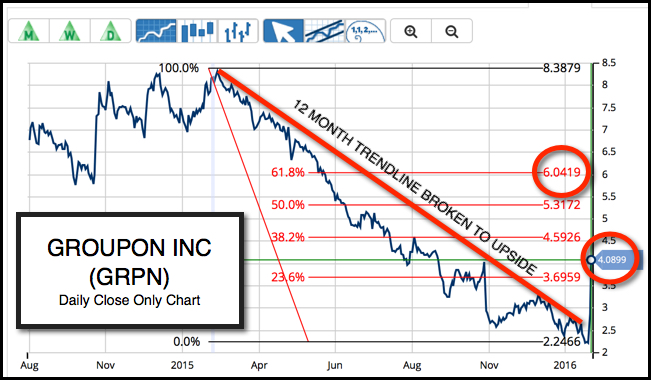 With all of these positives happening to Groupon, how high can this stock go? I could see this stock potentially trade over $6 and hit the 61.8% Fibonacci retracement resistance which would yield a profit of 50% from current levels. The monthly Trade Triangle turned green at $4.05. I would not be surprised to see a pullback from the current levels, but I would view that as a buying opportunity. The risk right now would be a move below $2, which would represent a fairly significant loss of capital. However, I don't expect that to happen and I think that any pullback will be viewed by traders as a low-risk entry point.

Strategy wise, I would take a small position in this stock on a pullback and look to take profits in 6 to 12 months or if my target zone of $6 was hit before then.