Hello MarketClub members everywhere! Yesterday, we saw the news push the equity markets sharply higher. Unfortunately, the enthusiasm did not last the entire day and the markets fell off quite dramatically from the early highs. As I have been saying for some time, the markets are in a broad trading range and Brexit is just adding fuel to the type of range trading mentality. 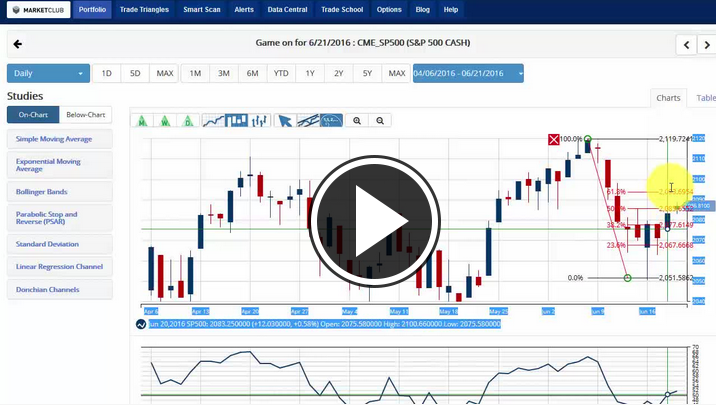 I was interviewed by Reuters yesterday and they asked me what I thought of the markets and Brexit. I answered them in the only way that I could, saying that no one at this juncture has a clue as to whether England is going to remain in the EU or it's going to leave. There are of course pros and cons for both sides of this argument.

Like I said earlier, it's going to be a volatile week and polls are more likely going to drive the sentiment than common sense.

This comment just came in from a MarketClub member:

"Yikes! My broker just sent out a note that margins for a list of Brexit-related futures contracts are increasing 200%.! These include the pound, Euro, Gold, Silver, FTSE, DAX, Euro Stoxx, CAC 40, MEFF IBEX and MIB. They are also refusing to accept any transfers into and out of positions in financial contracts, except for offsets".

I believe this confirms my suspicions that volatility is being priced into the market, and it is too late to purchase options profitably to play Brexit.

Exchanges do this only when they expect off-the-charts volatility. So here we go.

Thanks go to DGDYE for this news.

Indices: As I mentioned earlier most of the indices were volatile yesterday and did little to change their trading range status. I suspect that the highs seen yesterday are probably going to be the highs for the week, but at this point it really is like rolling the dice.

Gold (FOREX:XAUUSDO): Gold entered a sidelines position today with a red daily Trade Triangle triggering at the $1278.90 level. I have not altered my longer-term bullish outlook for this metal. However, I must be respectful of the signals and be disciplined enough to take them when they occur. I suspect that gold now has to regroup and then decide whether it wants to resume its upward trend or continue correcting to the downside.

Crude Oil (NYMEX:CL.N16.E): Oil exited any short positions and officially went on the sidelines with a green daily Trade Triangle triggering at $48.57. This market is in a broad trading range bound by $46 on the downside and $50 on the upside. The RSI indicator is flat on the 50 line indicating a neutral position at the moment. With both the Trade Triangles and the RSI indicator indicating a sidelines position, I feel more comfortable there than anywhere else at the moment.

In today's video, I will be looking at all the major indices plus gold and crude oil and maybe one or two stocks that I find interesting.

One thought on “Welcome To What I'm Calling H*ll Week”