The UK economy is sending mixed signals of resilient performance and negative sentiment. The latest PMI readings, both in services and manufacturing, plunged below 50, signaling a contraction. Consumer confidence took a nosedive to -12 in July from a -1 reading just a month before. And in the real estate sector, the latest survey of the Royal Institution of Chartered Surveyors of estate agents showed that only 23% of the participants expected housing prices to rise in the next twelve months.

The Bank of England, at its August meeting, responded with sweeping measures to ease monetary conditions. The BoE cut the benchmark interest rate by 25 bps to 0.25%, eased capital requirements for UK banks which will free up £150 billion of liquidity, and the “crown jewel” – a new round of £60 billion in Quantitative Easing, bringing the QE total to £435 billion.

Nevertheless, Key data released in the UK this week suggests that the overall economy is rather resilient, with unemployment holding at 4.9% and core inflation falling only moderately, from 1.4% to 1.3% year-on-year.

So where is UK economy heading? A prolonged period of deflation and constant easing cycles, just like the Eurozone? Or a speedy recovery that will lead to a premature ending of the Bank of England’s ultra-loose policy? In this article, I will argue for the latter.

The UK housing market is the real concern in the UK economy. Demand for housing in the UK softened even before Brexit. And as we mentioned above the Royal Institution of Chartered Surveyors of estate agents survey suggested that most agents expect housing prices to fall in the next twelve months. But as the Financial Times recently quoted, the Royal Institution of Charted Surveys also sees record low property stocks in the UK. That suggests that when investors return with an appetite for buying, there will be little property to feed them.

But that’s not all. One also has to consider that after Brexit, as the Pound plunged by 13% against the US Dollar, UK housing has turned even cheaper for foreign investors—a dominant force in the UK housing market. Another consideration is now lower UK lending rates which make mortgages cheaper. When all of that is added together—tight supply, lower prices, and cheaper mortgages, it’s not hard to see how UK housing could make a speedy recovery. And, of course, a speedy recovery will inevitably pressure the Bank of England to end its ultra-loose policy sooner rather than later.

The jobs data published earlier this week suggests the UK job market continues to be tight, with unemployment for July holding at 4.9% (unchanged from pre-Brexit levels) and wages for June grew at 2.4% year-on-year. The UK job market is so tight, in fact, that wages growth (see below) continued even when core inflation subsided. This suggests not only strength in the job market but a long-term tendency towards inflation, as higher wages lead to more purchasing power which leads to more spending and eventually higher inflation.

Taking the perspective of the past decade, and comparing the strength of the Pound vs. the fluctuations in UK exports, a clear pattern emerges. Every period of a weak Pound was followed by a jump in exports. As stated above, in the aftermath of the June 23rd Brexit vote, the Pound Sterling plunged by 13% against the Dollar. It’s not farfetched to expect a rebound in UK exports in the coming months, despite the looming Brexit. And export growth could definitely soften the blow for the UK economy and support the job market. 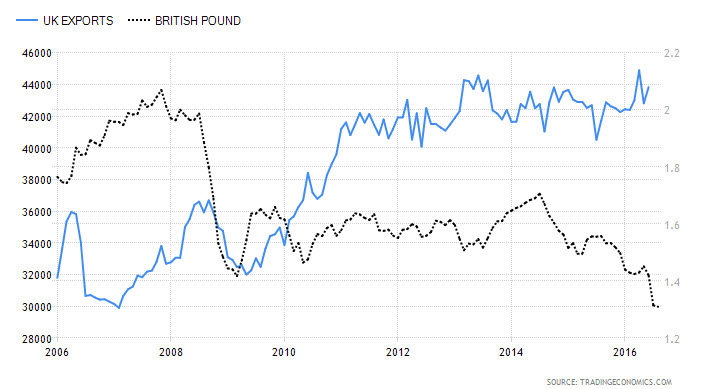 It’s true that July’s core inflation rate, which was released this week, revealed a slightly more moderate inflation rate of 1.3% vs. 1.4% in June. But as ironic as it may sound, the Bank of England, alongside its monetary easing, also lifted its outlook for inflation. According to the statement, the BoE expects inflation to surge to 1.9% by Q3 of 2017 and 2.4% by Q3 of 2018, substantially higher than the BoE’s May projections.

Furthermore, the Bank of England’s Inflation Report warns that inflation could surprise to the upside in the near term, all of which is linked to the depreciation of the Pound.

What happened back then? Inflation proved to be far more persistent than expected, trending above 2% for four years out of five, with a peak inflation rate of 4.2% in 2011.

This time around with the tight housing market, the overwhelmingly stronger job market and the Bank of England’s own expectation for higher inflation, suggests things could be different. The Bank of England might eventually have no choice and end the easing cycle much sooner than expected.

2 thoughts on “BoE Easing Will Be Short-Lived”