Despite the Federal Open Market Committee voting last week to maintain all of the Federal Reserve’s current rates, some market experts — including this one — are projecting that a rate hike is coming soon, and the Foreign Exchange market could see significant volatility because of it.

Indeed, as we suspected back on July 1, the Federal Reserve, in its release about the policy meeting held July 26-27, signaled that headwinds from Brexit are waning and pointed to diminishing near-term risks. But what does that mean, in practical terms? It means that the Fed is back in business: delivering mildly hawkish rhetoric, while preparing for the next rate hike.

Why? Because although the Fed paints a rather optimistic picture, its latest figures for GDP growth have done just the opposite. The US economy posted an annualized GDP growth of 1.2% for the second quarter, a big miss of the 2.6% that analysts were expecting. And for the previous quarter, GDP growth was revised down to an anemic annualized growth of 0.8%.

This contradiction — a bullish Fed, posting bearish GDP data — pushes the likelihood of a September rate hike right off the table. The Fed won’t raise rates before getting hard evidence that the economy is, once again, gaining steam. But investors are even more downbeat.

Because as rate futures imply in the CBOE Fed watch tool, investors are expecting the next rate hike to come only towards the end of next year. Even by July 2017, the implied probability of a rate hike is less than 40%. But investors — specifically FX investors — are risking an unpleasant surprise, as a rate hike by the Fed comes sooner than they realize and with it spur volatility. 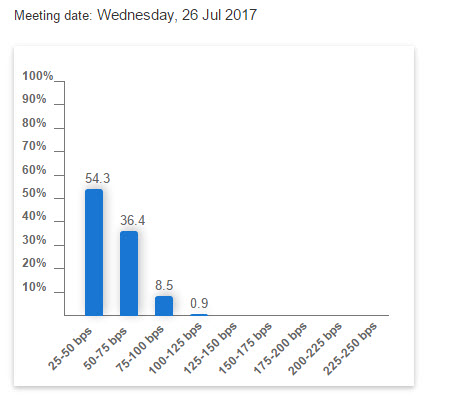 The US economy is actually far more robust than the GDP figures imply. That, in turn, means that investors are still way off the mark in their rate-hike expectations, as reflected by the CBOE Rate Probability tool. Following are several points to consider.

The US housing market is taking off. Annual Existing Home Sales have jumped to 5.57 million homes from 5.51 million homes, while New Home Sales have jumped to 592 thousand from 572 thousand. And year over year, the Case-Shiller Home Price Index has gained 5.2%. Taken together, these three indicators suggest not only a strong demand for housing in the US, but that buyers of American housing are strongly positive about the future, as - unlike retail sales - housing purchases require a greater degree of consumer confidence.

A rise in real wages is one of the clearest signs of inflation. As the chart below illustrates, US wage growth is decelerating from its spike in 2013, yet it still vastly outpaces the rate of inflation. This means consumers currently have more money to spend and that trend eventually tends to lift prices and generate higher inflation.

There is no getting around it. A weak GDP reading is a weak GDP reading, and a 1.2% growth rate is weak. But as pointed out by CNBC, most of the slack in GDP growth is due to a fall in inventories, which tends to be cyclical. The slack from falling inventories in the first two quarters will turn into a boost in the next two quarters, as cyclical inventory growth returns.

With investors anticipating a rate hike in the second half of 2017, the impact on FX is low volatility. Investors expect more easing from the ECB and the BoJ, and possibly from the BoE, and without a Fed rate hike, there is nothing to generate volatility in the near term. But as it becomes clearer and clearer that the US economy is growing at a solid pace, the probability for a rate hike will jump quickly - and with it, so will FX volatility.