“Kicking the can” has been a common analogy for the EU’s handling of the Greek debt crisis. In fact, until this day, from way back in 2010 when the crisis over Greece’s debt first erupted, the Greek crisis has not been resolved. Now, with EU leaders and the UK deeply divided on the timing and execution of Brexit, the UK could delay the activation of Article 50 of the Lisbon Treaty – at least until it gets an easy way out of the EU. A slow and drawn out Brexit, while negative for the UK economy in the immediate term due to uncertainty, may have only minimal impact on the US economy in the same time horizon. A slow, drawn out Brexit does not create shocks, and without the threat of an immediate shock, the US economy should weather the transition well.

Examining the US economy we can see that core inflation is at 2%, and credit growth is holding above 4%. Nevertheless, retail sales growth slowed to 0.5% MoM. This suggests that the US economy is growing but is hurdled by softness in consumer spending. But, since consumer confidence is relatively high (above 90) and because credit is still growing, the likelihood is that the weakness of the US consumer is temporary. Once another cycle of spending returns for the US consumer, GDP growth could return to move above 2% annualized. 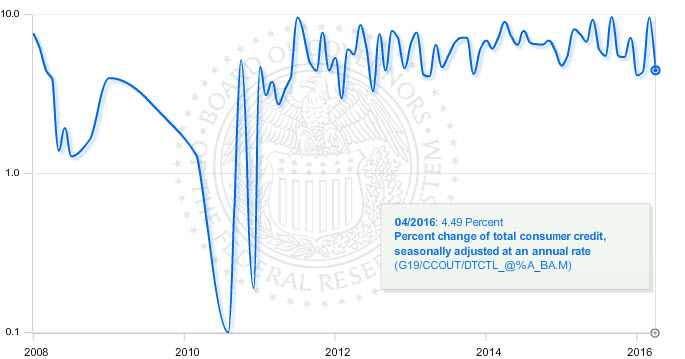 Chart courtesy of The Federal Reserve

What Can Push the Fed to Raise Rates?

So, what could push the Fed to raise rates in the aftermath of the Brexit vote? The US consumer needs to come back and spend, and Brexit needs to drag on into something akin to a Greek saga. And while the US consumer could return to spend in the third quarter, assessing whether Brexit will evolve into a Greek saga will only be possible after the UK has a new prime minister. But once a new PM is elected, it won’t take long to realize the depth of the divisions, because negotiations are likely to start immediately after the conservative party chooses a new leader in September.

If the divisions are, indeed, deep, the likelihood of prolonged Brexit negotiations will become dramatically higher, and that means the impact on the US economy will be dramatically lower. And since that is the case and since the US economy’s dynamics suggest a rate hike might be appropriate soon, it is too farfetched to believe that the next rate hike would only occur in 2018. Indeed, even a rate hike late in 2017 seems implausible. Rather, it is more likely that the next rate hike has only been postponed by several months. That leaves us to conclude that investors are overestimating the Fed’s dovishness and, therefore, underestimating the Dollar’s strength.