In the months of January and February, when the political climate turned more and more chaotic and Brazilian growth tumbled, yields on Brazilian 10-year bonds were as high as 16.78% and CDS prices, which measure the likelihood of a sovereign debt default, jumped to 7%. One would then expect that, from this point onwards, and especially in recent months with the prospect of a Fed’s tightening weighing on bond markets across the globe, the already fragile Brazilian government bonds would experience an utter meltdown, even to the extent of risking an actual default. But what happened instead was interesting. While bonds across the world were tanking and yields surging (bond yields move in reverse, relative to prices) amid the Fed’s tightening, Brazilian bonds staged an impressive rally, and yields on 10-year bonds fell from their highs back in January to as low as 11.4% today. Unsurprisingly, this was followed by an impressive rebound for the Brazilian Real.

The factors that led to this impressive bond recovery and revival in sentiment are three-fold. Monetary policy, politics, and commodity prices.

Monetary Policy: The Central Bank of Brazil, which historically has been slow to react to previous inflationary spirals, acted with surprising vigilance. The central bank hiked rates to as high as 14.25% during 2016, which helped to curb inflation from as high as 10.71% at the start of the year to 6.99% its current level. As inflation cooled, the Brazilian central bank decided to cut rates slightly in the third quarter of 2016 to 13.75%. But its vigilance had already made its mark. Yields on government bonds fell sharply and bond prices bounced. All of which had a significant and positive impact in on sentiment.

Politics: The turmoil in Brazilian politics is not over; every few months it seems another politician is sucked into one of the numerous bribery investigations. Still, unlike before, the investigations of bribery charges are actively being pursued. And let’s not disregard the notable achievement of Brazilian legislators who impeached the corrupt Brazilian president and left-wing leader Dilma Rousseff. The removal of Rousseff is, no doubt, an important pivot in Brazilian politics and the move of the Brazilian nation towards transparency, a development that is seen very positively by investors.

Commodities: Brazil is a commodity-oriented economy; it is a major exporter of commodities such as iron ore, Oil, and soybeans. That means the country’s economic growth is highly dependent on commodity prices. When commodity prices collapsed during 2015 that weighed heavily on the Brazilian economy. But since the lows of February 2016, commodities in aggregate have made an impressive rebound. The oil price has bounced from $27 a barrel and currently trades above $50 a barrel, and the S&P GSCI Commodity Index that aggregates a basket of commodities has rebounded by 28% from its lows. That recovery has yet to translate into a tangible impact on the Brazilian economy but has lifted investors’ confidence in the economy.

The risk over Brazil still looms. Especially given that, after such a recovery, profit taking is generally the norm and because Brazilian politics tend to be so unpredictable. Yet, we could draw some important conclusions from activity in the Bond market and from monetary policy. Yields for Brazilian 10-year bonds face support around 11%, and that holds the potential for a jump in yields, especially if the Fed moves to tighten three times in 2017. But, if yields break below the 11% and the 10% barriers, that would signal that yields in Brazil are coming down to normal levels. It would also emphasize that investors expect the Central Bank of Brazil to maintain its vigilance against inflation and essentially keep up with the Fed’s tightening by moving with its own tightening. That will signal, above all else, that Brazil has turned a corner and moved back to growth. 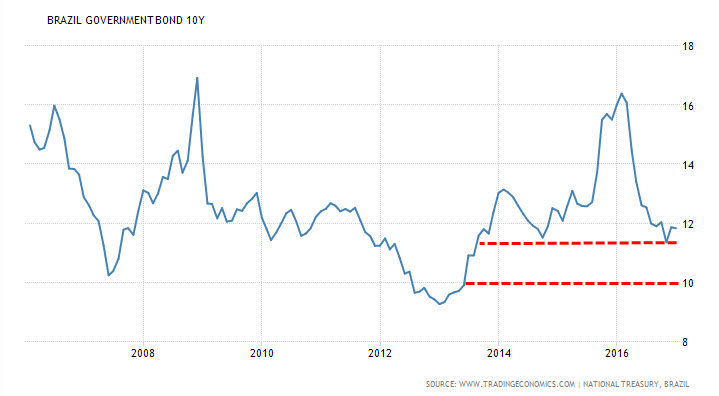