In early 2017 Forbes ranked Warren Buffett as the world’s second richest man with a net worth of $72 billion.

Unlike most other billionaires on the list, Buffett didn’t get rich from owning just one company. Berkshire Hathaway Inc. (NYSE:BRK.B) functioned like a giant mutual fund, investing in many companies from different industries all across the economy. That way, if one industry or company struggled, it wouldn’t crush Berkshire’s performance.

At the core, this is a lesson in diversification. Putting all your eggs in one basket can be risky.

That is particularly true in the cannabis sector. It is a super young industry and cannabis stocks can be quite volatile.

I want to share a cannabis stock that Warren Buffett would love.

Much like Buffett, it is investing in a group of individual cannabis companies – a strategy designed to capitalize on broad strength in the cannabis industry while also limiting exposure to just one company, product or management team.

This also happens to be a great time to check this company out. It recently raised $24 million in capital that its currently deploying to grow and prepare for recreational cannabis in Canada next summer.

Invictus MD Strategies (NASDAQ:IVITF, TSX:IMH.V) is an up and coming name in Canada’s cannabis industry that is headquartered in British Columbia. Shares are traded on the Toronto Venture Stock Exchange and available to US investors through OTC markets.

Invictus operates just like Buffett’s Berkshire Hathaway. It is making targeted investments in a group of cannabis companies as opposed to betting all its chips on just one.

Two of these companies are licensed cannabis producers under Canada’s medical program. This is good to see because it’s not that easy to get a cannabis license these days in Canada.

Here is a quick run through of the four companies and what makes each one interesting.

Acreage Pharms is a licensed producer under Canada’s medical program. It has already finished construction on a 6,800 square foot production facility with plans for a major addition.

AB Ventures is an earlier stage company than the previous two. It was formed to develop a second licensed expansion facility through its common ownership with AB Labs.

AB Ventures recently closed the acquisition of 100-acres in Hamilton, Ontario for future cannabis cultivation. If it can complete license acquisition in the next few months production at AB Ventures could start as early as December 2017.

And finally, the fourth company Invictus owns is.

Invictus uses soil and fertilizer from Future Harvest to supply and ensure its cultivation facilities have high-quality, trusted materials. 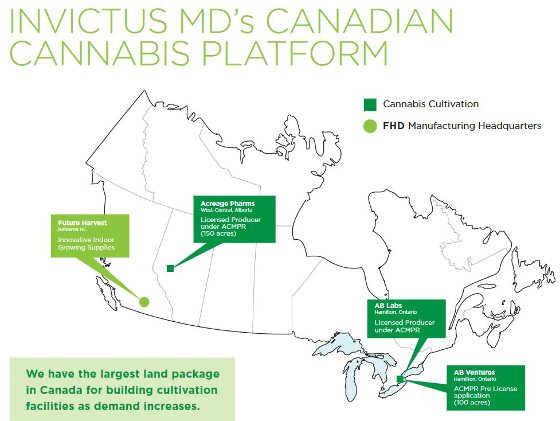 As you can see, Invictus has been making some pretty major moves, investing tens of millions of dollars into young cannabis companies operating in a high-growth industry.

With an impressive portfolio of young cannabis companies in tow, Invictus has been raising tens of millions of dollars from eager investors that it will use to ramp production and fuel growth.

For example, on May 24 Invictus announced it had raised $24 million in fresh capital, bringing its cash position to more than $30 million.

Now, Invictus is busy investing that $30 million to ramp cannabis cultivation ahead of legal recreational next summer. Let me give you an example.

On July 14, Invictus announced that Acreage Pharms has received its development permit for Phase 2 of its expansion project and has broken ground on its 27,800 square foot purpose built, multiple room production facility. All contractors and suppliers necessary for the project have been scheduled. Invictus MD has committed to investing $6.0 million, which will be used to fund the costs of constructing the production facility.

Invictus’ Aggressive Moves Are Gaining Attention In The Cannabis Sector

All of this activity has not gone unnoticed by the cannabis sector and the broader stock market as well.

On March 31 Invictus announced its application to up list to the Toronto Venture Stock Exchange had been accepted, giving it more media exposure and access to a broader class of investors.

On June 23 Invictus announced it would be included in the Horizon Medical Marijuana Life Sciences ETF (TSX:HMMJ), the first ever cannabis fund.

This is important for two reasons. The first is that it will give Invictus additional media exposure and encourage individuals and fund managers to invest.

The second is that if Invictus grows and the index is re balanced, fund managers tracking the index will have to buy more shares of Invictus to match the index weighting ratios.

What Do Sales And Earnings Look like At This Point?

The companies Invictus is investing in are still early stage. There isn’t a ton of revenue happening yet.

In the last 12 months, Invictus has reported revenue of $3.5 million.

With a market cap of $65 million, Invictus is trading with a price to sale ratio of 19. There’s no question that is high. For example, 3 would be considered value. But considering the big ramp in production going on right now it shows that investors are willing to pay up in order for a chance at bigger gains. So big picture I don’t view the higher valuation as a major issue.

Invictus Is Up 87% Since November 8

Invictus is up 87% since November 8. In 2017 shares have been volatile with the broader cannabis sector, but overall have been hanging pretty tough with a 5% gain on the year. 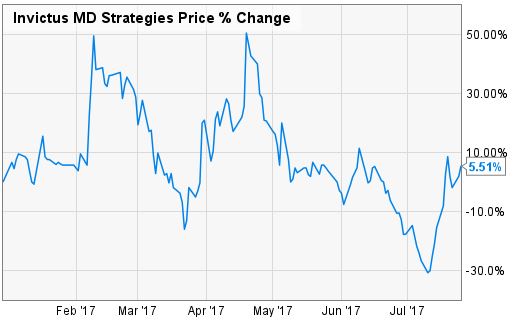 Invictus is a great way to gain diversified exposure to the broader cannabis industry. It has been on a rampage buying and investing in cannabis companies. Moving forward Invictus will be investing tens of millions into those companies to help them grow production. If it can successfully ramp production in the next six to nine months, I expect shares to climb 50% from current levels back to the all-time high.

2 thoughts on “Warren Buffet Would Love This Cannabis Stock”