As expected, Visa Inc. (NYSE:V) reported another great quarter with beats on both the top and bottom lines. EPS and revenue estimates were beaten by $0.05 and $200 million, respectively. Since its earnings release, Visa has set new to all-time highs, currently sitting at ~$100 per share. The Visa Europe acquisition has been a tailwind for the company, translating into phenomenal transaction and volume growth. However, this was expected and beginning with the initial quarter Visa started reporting the fully integrated company these numbers have been fantastic. Visa has been posting great growth across all segments of its enterprise further accentuated by the Visa Europe acquisition. Meanwhile, the company continues to grow its dividends and engage in consistent share repurchases. It’s noteworthy to point out that Visa has been buying back its own stock at near all-time highs as of recent. Visa has continued to be a best in-class large-cap growth stock, however, does this translate into a compelling investment opportunity for a great long-term position? I always felt that Visa was a great long-term holding that offered growth and stability independent of banks and/or interest rates. The fully integrated Visa enterprise in conjunction with major client wins will likely enable sustained and durable growth now and into the future, however, I feel that Visa is overvalued based on the first nine months of revenue from FY2017 and a pullback may be coming.

Acquisition of Visa Europe created one global company that further extended Visa's payment solutions leadership while adding 3,000 European issuers, over 500 million card accounts and more than €1.5 trillion in payments volumes. In addition to the Visa Europe acquisition, Visa has managed to wrestle domestic market share away from rivals by out-competing for major contracts with Costco Wholesale Corporation (NASDAQ:COST), USAA and Fidelity. As part of the Costco transition, millions of co-branded American Express Company (NYSE:AXP) Costco cards were switched over to Visa. Fidelity has over 500 million card holders that have been converted to Visa from American Express this year. USAA is the 10th largest credit and debit card issuers in the U.S. and recently converted to Visa Inc. (NYSE:V) from MasterCard Inc. (NYSE:MA). Taken together, the Visa Europe acquisition and major client wins enabled a spike in growth that will likely provide a durable growth driver over the years to come. Although these are all great catalysts, my concern lies in two areas:

1. When the first full year of the Visa Europe integration results are reported, we’ll have a clear year-over-year growth rate accounting for the fully integrated company. I’m skeptical that this will be live up to the expectations that the market is expecting.

2. Thus far revenue growth over the first nine months in FY2017 has been marginal. Unless the Q4 of FY2017 is substantially higher, Q1 of 2018 will likely disappoint as this will be the first year of the fully integrated Visa Europe numbers.

As expected, Visa posted a very strong fiscal Q3 quarter that beat on both EPS and revenue by $0.05 and $200 million, respectively. The latter revenue beat came in at $4.565 billion (FY Q1 of $4.461 billion and FYQ2 $4.477). Payments volume growth came in at 38% to $1.9T. As Visa Europe is now fully integrated under the Visa umbrella, cross border volume was up year-over-year while total processed transactions increased 11%. Visa raised guidance for EPS of growth to 20% for the FY2017.

All of Visa’s numbers have been great when compared to the quarters subsequent to the Visa Europe acquisition. I think these growth numbers are misleading and serve as an incorrect comparator. Taking a look at back-to-back quarterly comparisons from the initial quarter Visa Europe was included in the earnings results compared to the absence of these numbers we can see one time spikes in revenue across the entire enterprise. Once Visa Europe was included in the revenue numbers (comparing percent growth); services, data processing revenue, international transaction revenue and other revenue grew by 33%, 150%, 800% and (80%), respectively. As these numbers indicate albeit it's only a pre and post quarters flanking the Visa Europe integration, we can see a shape increase in all revenue streams as a result of Visa Europe being brought under the umbrella (Figures 1 and 2). 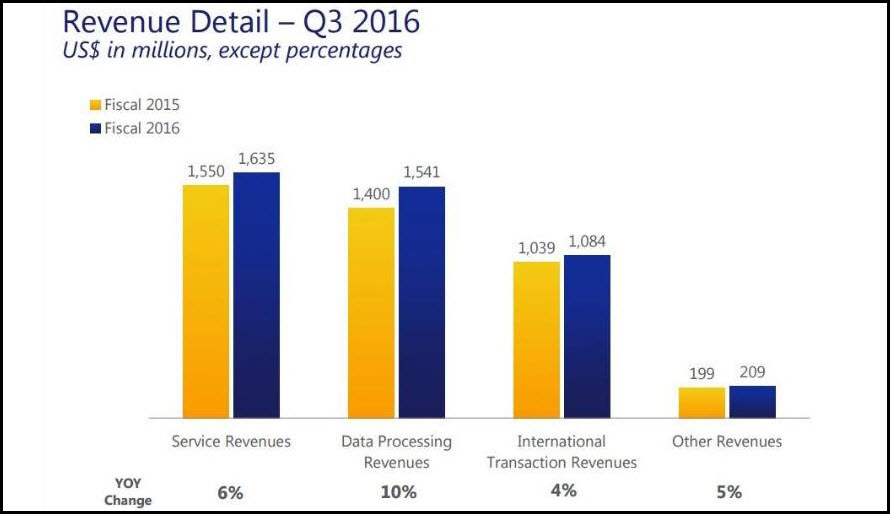 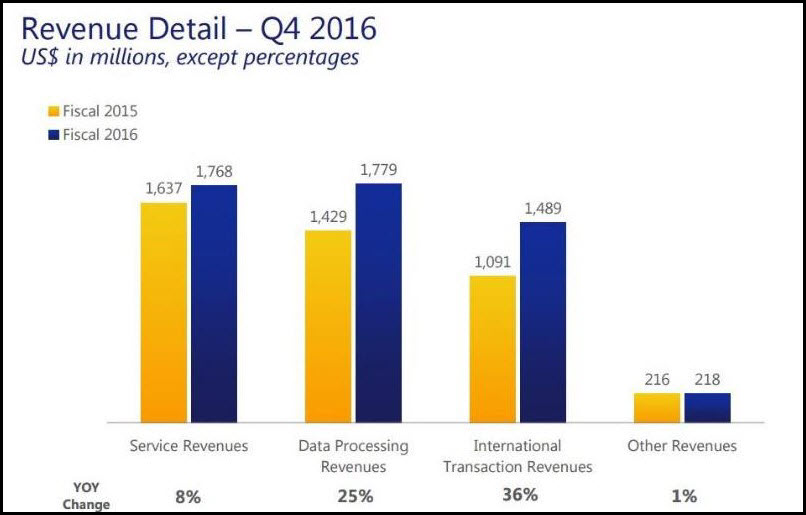 Its recent earnings report propelled Visa to an all-time high of ~$100 per share. This translates into a P/E ratio ~44 and a PEG ratio of greater than 2.2. This stock is richly valued and possesses a lofty premium relative to other large-cap growth stocks and for good reason considering the growth rate. However, looking at the most recent quarter-over-quarter comparisons and the first nine months of FY207 (Q1, Q2 and Q3 2017) there was virtually no growth in overall revenue.

These trends indicate that now the Visa Europe acquisition is complete and reflected in earnings, these year-over-year growth rates are largely attributable to Visa Europe and thus an incorrect comparator. After a full year of Visa Europe earnings on the books, these growth rates will likely slow down dramatically considering that the aggregate growth rate through the first nine months of FY2017 comes in at only 2.33%. Any miss in future quarterly earnings could derail this stock as it's priced for perfection. I'd look for any significant sell-off in the future to initiate a position at a more reasonable price. This stock trades at a premium even relative to other high-quality large-cap growth stocks.

Visa Inc. (NYSE:V) is a richly valued stock and possesses a lofty premium relative to other large-cap growth stocks. Looking at the most recent aggregate growth over the first nine months of FY2017 (Q1, Q2, and Q3 of FY2017) there was minimal growth across all revenue streams, coming in at only 2.33%. Taking a look at pre and post quarterly comparisons from Visa Europe being reported in the revenue numbers, one time spikes in revenue across the entire enterprise was observed. These trends indicate that the Visa Europe acquisition is largely attributable to these year-over-year growth rates. I feel that these year-over-year comparisons are incorrect since Visa moved from a constant business model to absorbing the Visa Europe business. After a full year of Visa Europe earnings on the books, these growth rates will likely slow down dramatically and indicated by the first nine months of FY2017. Visa has made efforts to wrestle market share away with the recent addition of major customer accounts with Costco, Fidelity, and USAA. These client wins will help to drive growth on the domestic front. As many countries continue to make a secular transition towards cashless societies, the credit card transaction space will continue to reap the rewards. However, considering Visa's lofty premium and in my opinion slowing growth rate, I'd be cautious in initiating a position and wait for a better entry point while being cognizant of the ensuing slowdown in growth as Visa Europe matures into the revenue stream.