In the next two years, millions in new capital flowed into the industry, giving birth to a string of greenhouses and dispensaries.

However, Puerto Rico's promising young cannabis industry suffered a major setback in the fall of 2017 when the country was struck by a devastating hurricane, Maria.

Here's a quote from NBC News:

"Big manufacturing and grow facilities have had their roof blown off, there is water in their manufacturing rooms, equipment damaged, no light for plants and most are dead," said Goodwin Aldarondo, the president and CEO of Puerto Rico Legal Marijuana. You're talking about millions of dollars of damage."

Despite the impact of hurricane Maria, one young cannabis company is pushing forward with its expansion plans - in the early stages of building five cannabis dispensaries in Puerto Rico.

If it succeeds, the company is in position to be an early leader in the high-growth medical cannabis industry.

Green Spirits is in the early stages of building five cannabis dispensaries in Puerto Rico.

Despite the devastating impact of hurricane Maria - GSRX is on schedule to open a line of cannabis dispensaries.

On November 17 GSRX announced it had completed construction of its first medical cannabis facility.

On January 5 GSRX announced it had completed the acquisition of a pre-qualified medicinal cannabis dispensary in San Juan, Puerto Rico.

On February 1 GSRX announced it had begun construction of a fourth cannabis dispensary.

On February 5, GSRX announced it had begun construction on its fifth cannabis dispensary.

On February 15 GSRX announced it had entered into an operating agreement to form a new entity, Sunset Connect Oakland, LLC, to enter into the cannabis industry in California via a joint venture with Sunset Connect SF Inc. ("Sunset Connect"), an established cultivation and branded extractions business headquartered in the San Francisco Bay Area.

Here's a clip from the press release:

"The operating agreement provides that Green Spirit will invest $1 million dollars for 55% of the new entity, which will be used towards expansion of the existing company, including cultivation, extraction and operations, as well as broadening distribution of the Sunset Connect brand of artisan flowers and extractions throughout the state."

As you can see, GSRX is making some big moves to cash in on Puerto Rico and California's cannabis markets. It the company succeeds, it's in position to be an early industry leader and delivered outsized returns to early shareholders.

Financials: GSRX is an early stage cannabis company that isn't producing any revenue. For the time being GSRX looks well funded while it transitions into commercialization.

Valuation: GSRX has a market value of $142 million. There's no question this company has a lot of potential. But that is a high valuation for an early stage company with no revenue.

Ticker Exchange Listing: Shares are traded in US, OTC markets under the ticker symbol GSRX. When I took a deeper look into this listing, I saw some potential risk here that everyone needs to be aware of. For the time being, this is not a very liquid stock. I see average daily trading volume of just 668 shares. With a share price of $4.75, that means about $3,175 worth of shares are trading hands per day on average. This should be fine for smaller investments, but for the time being this does not look like a ticker that can handle a lot of intraday trading.

Shares Have Been Struggling on the Chart Because of Hurricane Maria

GSRX was rallying nicely last summer, hitting a series of new all-time highs. However, shares began falling last September during the hurricane. Since then, GSRX has been slow trending lower. Take a look below. 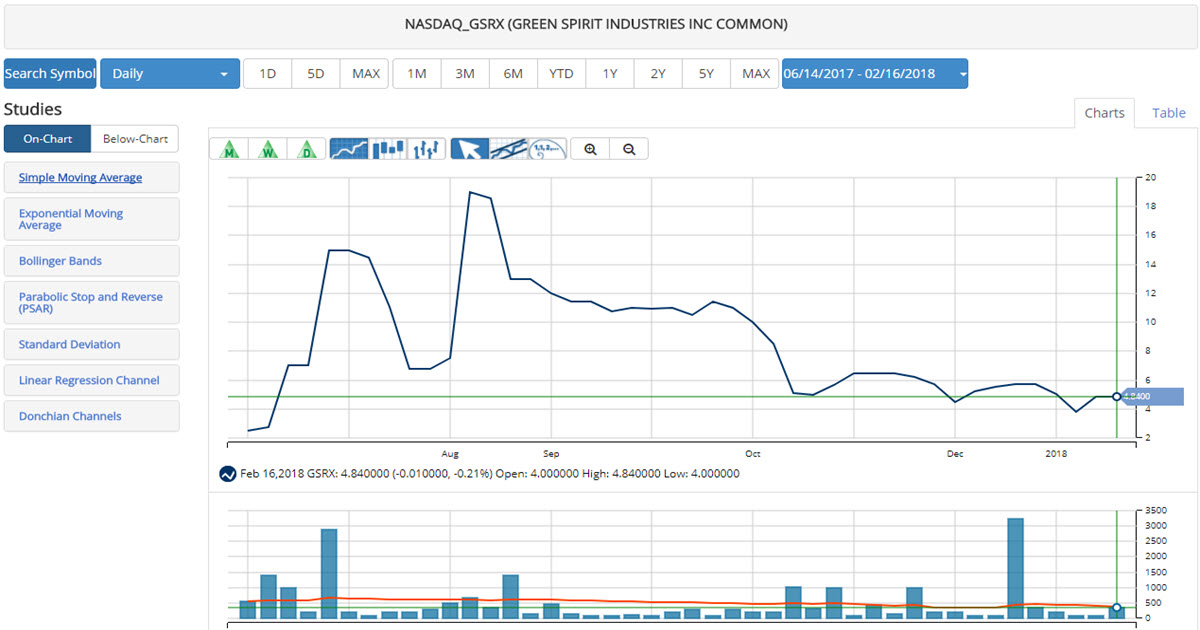 What you can also see is that shares have begun to stabilize and find more support between $4 and $5. Looking forward, I am expecting to hear more good news of the dispensaries and that would provide additional support on the chart.

This is a high-risk cannabis stock. The greatest short-term risk is Puerto Rico's ability to recover from hurricane Maria, including restoring electricity. Beyond these challenges, GSRX needs to execute its plan to finish building four more dispensaries and move into revenue production.

GSRX is a direct play on Puerto Rico's young and high-growth medical cannabis industry. The company is in the early stages of building five cannabis dispensaries. If GSRX succeeds it will be in position to be an early industry leader.

One thought on “Growing Potential in Puerto Rico”