Hello traders everywhere. As we close out the last trading day of May, the only thing that I can think of are tariffs, tariffs, and more tariff talk. Tariffs have certainly been the theme of the month, and without much of a surprise, President Trump closed out the month with the announcement of Mexican tariffs. That news has pushed the major indexes lower on the day with the DOW triggering a new red monthly Trade Triangle indicating that the index is now facing a long-term downtrend.

Washington will impose a 5% tariff from June 10, which would then rise steadily to 25% until illegal immigration across the southern border was stopped, Trump tweeted later on Thursday. Mexican President Andres Manuel Lopez Obrador said he would respond with "great prudence." 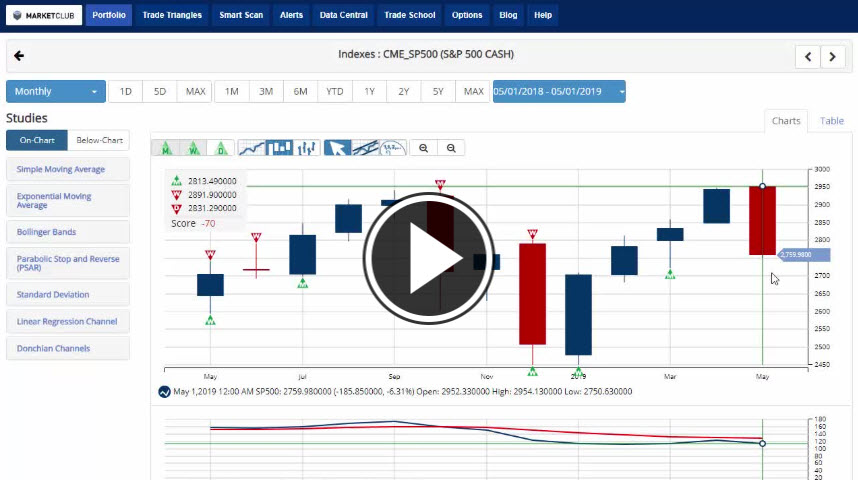 All three major indexes are down over -6% on the month, the worst losses of the year on a monthly level this year, with the NASDAQ leading the pack with a loss of -7.5%. The DOW is the first of the three to issue a new red monthly Trade Triangle, but the other two are not far behind. In fact, the DOW just set it's longest weekly losing streak in 8 years with 6 straight weeks of losses. The NASDAQ and S&P 500 will both post their 5th weekly loss out of the last 6 weeks.

The 10-year Treasury yield dropped to lows not seen since 2017. The U.S. benchmark was yielding 2.17% Friday morning. It was above 2.5% at the beginning of the month. Mexico's currency, the peso, tanked against the dollar by more than -3% to trade at 19.77 per dollar.

On the flip side of things Bitcoin has had, it's second-best monthly gain posting a gain of +57%. The only time that Bitcoin has had a bigger monthly gain was back in August of 2017 where it posted a gain of +67%. There was a bit of profit-taking the last three days as bitcoin fell $1,100 on Thursday to test the $8,000 level, but that looks to be short-lived as it's up almost +2% today and trading close to the $8,500 level.