It’s been a volatile year thus far for the Silver Miners Index (SIL), with the ETF starting the year out by outperforming the S&P-500 (SPY), up 9% as of April.

Unfortunately, this 1500 basis point outperformance has since reversed to a massive underperformance, with the SIL finding itself down 35% year-to-date. The sharp reversal can be attributed to the plunging silver price, combined with inflationary pressures, which have severely impacted margins for the group.

In fact, some of the worst producers, like Endeavour Silver (EXK), now operate at negative all-in-sustaining cost margins.

While Endeavour Silver is an obvious name to avoid from an investment standpoint, given that it’s producing at $21.00/oz and selling its ounces below $20.00/oz, a few names have been dragged down unjustifiably by the terrible sentiment sector-wide.

Two of these names are Wheaton Precious Metals (WPM) and Hecla Mining (HL), and they’re sitting at 45% off sales despite being much lower risk than their peers.

In this update, we’ll look at which is best suited for one’s portfolio:

Hecla Mining and Wheaton Precious Metals (“Wheaton”) have two very different business models. While they both sell a significant amount of silver, Wheaton is a streaming company, while Hecla is a producer.

This means that Hecla actually operates its four mines in Canada and the United States, a business model that carries higher risk and makes Hecla more sensitive to inflationary pressures.

In Wheaton’s case, the company receives deliveries from several operating partners and is immune from inflationary pressures.

The reason is that Wheaton provides an upfront payment and, in exchange, gets a portion of metal produced over the mine’s life without worrying about rising labor/fuel costs or growth/sustaining capital. The result is that WPM has a much higher margin business, enjoying 76% gross margins and 63% operating margins on a trailing twelve-month basis.

In Hecla’s case, its gross and operating margins are sitting at ~40% and 10%, respectively. So, from a business model standpoint, Wheaton certainly wins in this category, providing a lower-risk way to gain exposure to precious metals, even if it may not have as much leverage.

Moving over to diversification and jurisdictional risk, Hecla has four operating mines, though one was just recently acquired (Keno Hill). In addition, all of its operations are in Tier-1 ranked jurisdictions, with mines in the Yukon Territories, Alaska, Idaho, and Quebec.

This is relatively diversified as far as producers go in the silver space, and Hecla has the best jurisdictional profile of its peers, with the major silver-producing countries being Mexico, China, and Peru.

Conversely, Wheaton is receiving deliveries from over 20 operating mines, has some of the best-financed partners in the sector, and is also partnered on several development projects like Goose, Blackwater, Santa Domingo, and Marathon that will be in production by the end of the decade.

While its jurisdictional profile may not be as attractive with partners spread across the Americas with some European exposure, it is significantly more diversified.

Finally, Wheaton also has more diversification from a metals standpoint, with ~40% of its revenue from silver, ~50% from gold, and the remainder from palladium and cobalt. 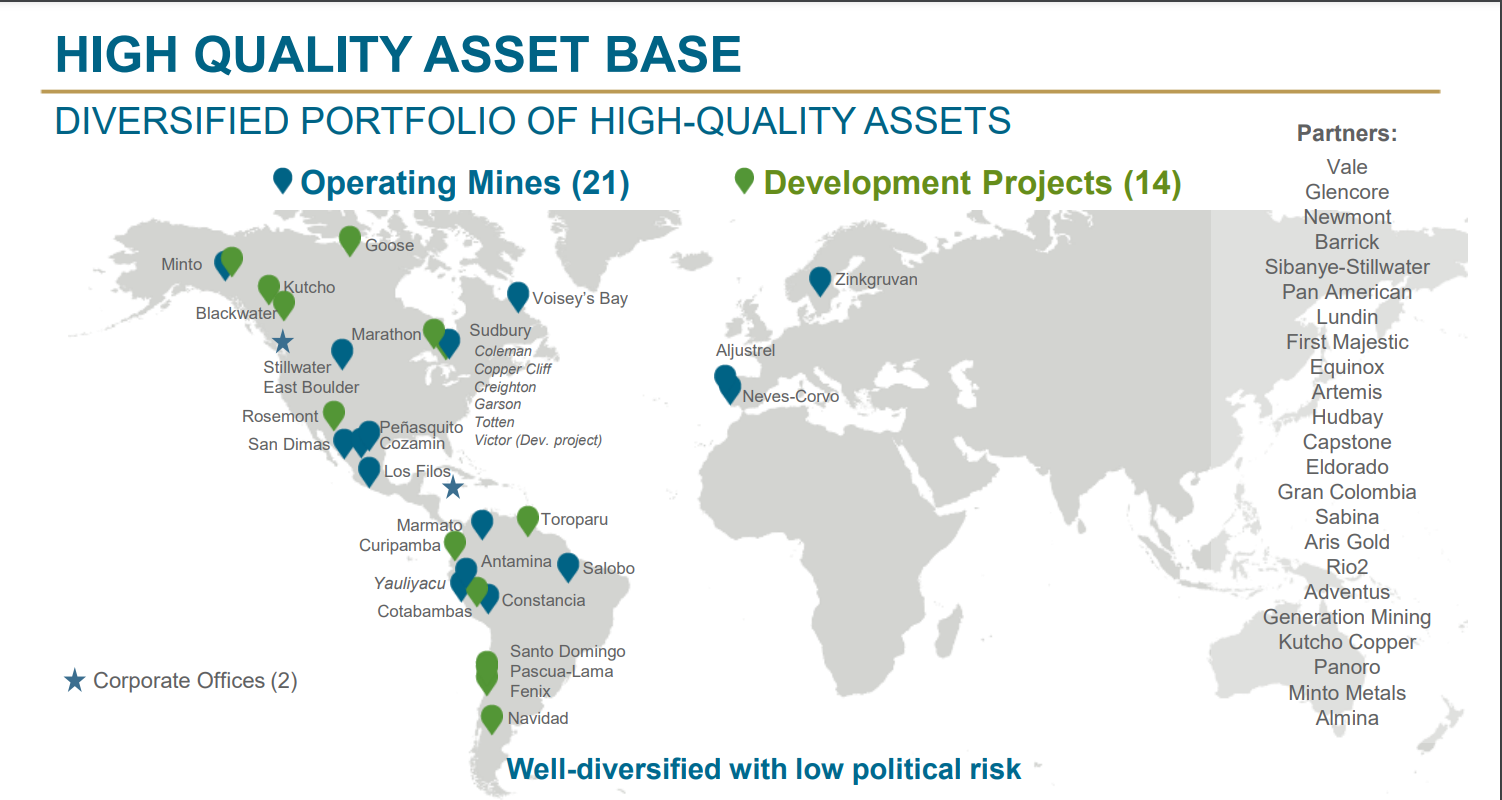 Based on the fact that Wheaton has more than quadruple the number of mines that Hecla has, which are contributing to its revenue, and this figure is expected to increase to more than 6x later this decade, Wheaton wins by a hair in this category from the diversification and jurisdictional risk perspective.

This is because even though Hecla is one of the largest silver producers and has the best jurisdictions, Wheaton operates in some of the same jurisdictions but is considerably more diversified.

Given its size relative to Wheaton, it also has an easier time growing its platform, with an additional acquisition able to easily push production above 52 million silver-equivalent ounces per annum later this decade.

Hence, Hecla wins on growth, with the potential for over 25%+ production growth from FY2021 levels.

Given that Hecla wins from a growth standpoint and is a little more undervalued relative to its historical multiple vs. Wheaton, Hecla wins in this category.

Although Hecla may have a better growth profile and more leverage to the silver price, Wheaton is by far the lower-risk bet.
Normally, I would favor a name like Hecla, given that royalty/streaming companies like Wheaton are rarely cheap, meaning one is paying a high price for the lower-risk business model.

However, in this case, WPM is at its cheapest valuation level in years, and investors have a phenomenal reward/risk set for the stock under $32.00.

In summary, I see WPM as a Buy. That said, if HL were to dip below $3.30, I would view this as a buying opportunity.

Disclosure: I am long WPM