With retail sales declining more sharply than expected during the holiday month and the third consecutive month of contraction in industrial activity, there is concern on Wall Street that the Federal Reserve may have overcooked it with respect to interest-rate hikes to cool down and contain inflation.

Amid widespread bearish sentiments, it could be wise to bank on fundamentally strong, profitable, and fairly-priced sector-leading businesses, such as Taiwan Semiconductor Manufacturing Company Limited (TSM).

The super-advanced semiconductor chips that TSM produces are difficult to fabricate due to their high development costs. Hence, this presents a significant barrier to entry into the competition.

The overall investment for these two fabs will be approximately $40 billion. When complete, TSM Arizona’s two fabs will manufacture over 600,000 wafers annually, with an estimated end-product value of more than $40 billion.

On November 15, it was revealed that Warren Buffett’s Berkshire Hathaway (BRK.B) spent $4.1 billion to acquire a stake in the world’s largest contract chipmaker during the third quarter. According to SEC filings, the fabled conglomerate bought just over 60 million of TSM’s New York-listed American Depositary Shares at an average price of around $68.56.

Mirroring the positive developments, the stock has gained 16.9% over the past month to close the last trading session at $89.47.

Here is what may help the stock maintain its performance in the near term.

Over the past three years, TSM’s revenue has exhibited a 28.4% CAGR, while its EBITDA has grown at a stellar 33.4% CAGR. The company has increased its net income and EPS at a 42.1% CAGR during the same period.

Despite solid financials and upward momentum in price, TSM is still trading at a discount compared to its peers, thereby indicating upside potential. In terms of forward P/E, the stock is trading at 15.73x, 18.9% lower than the industry average of 19.40x.

Favorable Analyst Estimates for Next Year

TSM has also impressed by surpassing consensus EPS estimates in each of the trailing four quarters.

MarketClub’s Trade Triangles show that TSM has been trending UP for each of the three time horizons. The long-term trend has been UP since December 1, 2022, while the intermediate-term and short-term trends have been UP since January 9, 2023, and December 29, 2022, respectively. 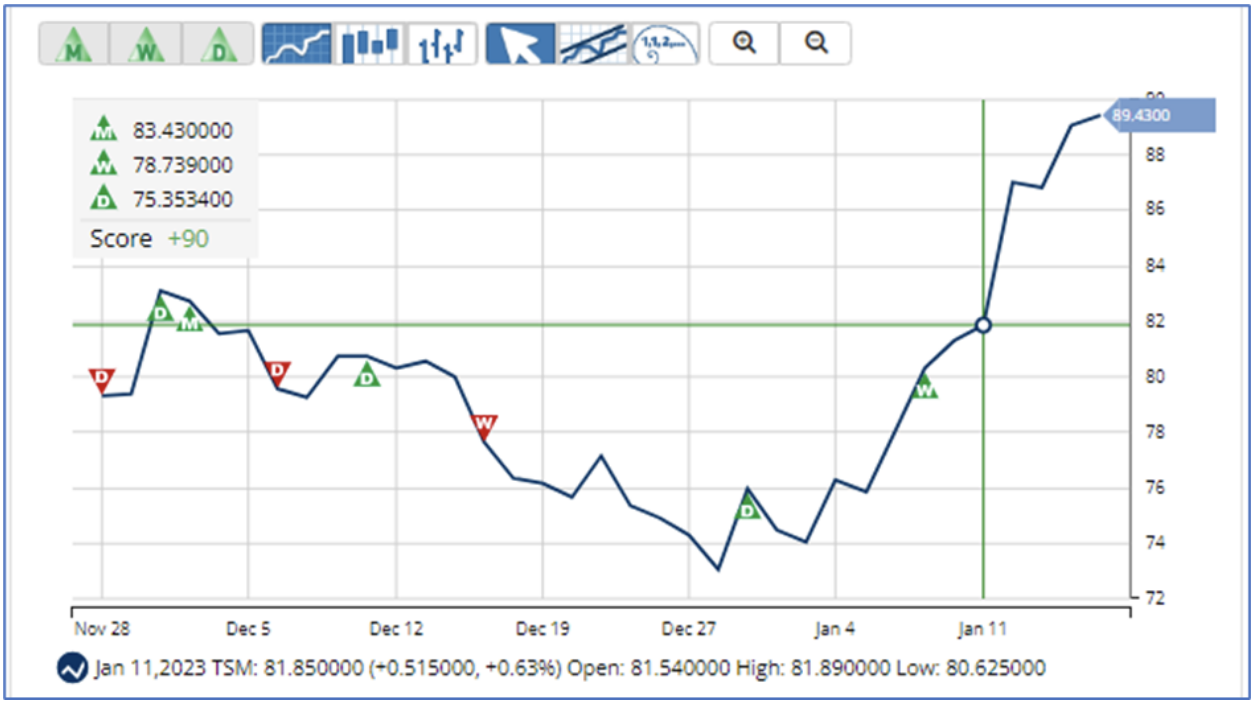 The Trade Triangles are our proprietary indicators, comprised of weighted factors that include (but are not necessarily limited to) price change, percentage change, moving averages, and new highs/lows. The Trade Triangles point in the direction of short-term, intermediate, and long-term trends, looking for periods of alignment and, therefore, strong swings in price.

In terms of the Chart Analysis Score, another MarketClub proprietary tool, TSM scored +90 on a scale from -100 (strong downtrend) to +100 (strong uptrend), indicating that the uptrend will likely continue. While TSM is showing intraday weakness, it remains in the confines of a bullish trend. Traders should use caution and utilize a stop order.

Click here to see the latest Score and Signals for TSM.

Remember, the markets move fast and things may quickly change for this stock. Our MarketClub members have access to entry and exit signals so they'll know when the trend starts to reverse.