After receiving many requests, I've contacted the team from DayTradeology to help explain how to use MACD AND Forex. Please let me know what you think of the Guest Blog spot.

The MACD (Moving Average Convergence Divergence) is a trend-following momentum indicator that shows the relationship between two moving averages of prices. The MACD is calculated by subtracting the 26-day exponential moving average (EMA) from the 12-day EMA. A nine-day EMA of the MACD, called the "signal line", is then plotted on top of the MACD, functioning as a trigger for buy and sell signals when trading the forex market.

Developed by Gerald Appel, Moving Average Convergence/Divergence (MACD) is one of the simplest and most reliable indicators available.

MACD uses moving averages, which are lagging indicators, to include some trend-following characteristics.

These lagging indicators are turned into a momentum oscillator by subtracting the longer moving average from the shorter moving average. The resulting plot forms a line that oscillates above and below zero, without any upper or lower limits.

Benefits of the MACD

One of the primary benefits of MACD is that it incorporates aspects of both momentum and trend in one indicator. As a trend-following indicator, it will not be wrong for very long.

The default settings for the MACD which we will use are:

The last common use of MACD is that of divergence.

If the MACD has made a new low and starts to head up but price continues dow making new lows that is one form of divergence (BULLISH Divergence).

Also, if the MACD has made a high and starts to head down making new lows but price continues up making new highs that is another type of divergence (BEARISH Divergence). This is also referred to as Negative Divergence and is probably the most reliable of the two and can warn of an impending peak.

There are many ways to trade the MACD but one of our favorites are too use two different time frames. All we do is establish a trend in a higher time period than the one we intend to trade. For our higher time frame we like to use the 30 min chart and then drop down to the 5 min chart when conditions have been met on the 30 min chart.

On the 30 min forex trading chart below there was a typical buy signal. The chart below (red arrow) shows the fast 9-day signal EMA (gray line) crossing over the MACD line EMA (green line). 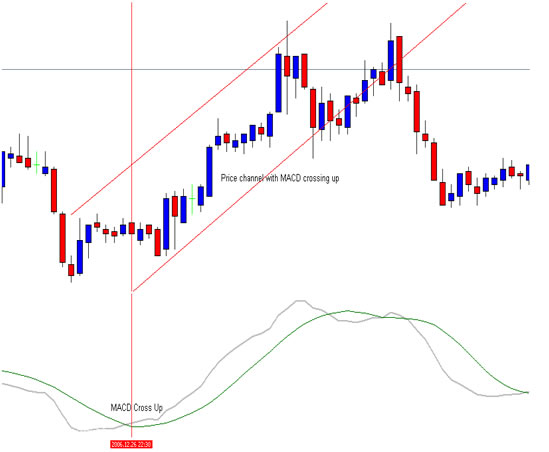 After confirming the signal on the 30 min chart we then dropped to the 5min chart and bought the rallies wherever the MACD crossed up, confident to stay long (to buy) as long as our higher time period MACD trend in the 30 min stayed intact. If the 30 min MACD signal line were to cross down we would have closed all long positions. 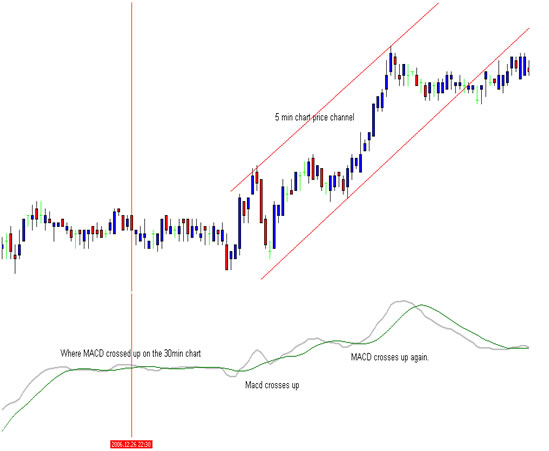 That having said, the MACD still is and will always be one of the few indicators that all traders love and use daily and in many ways it is an old familiar friend you know you can rely on.

Thank you for joining us in this forex trading lesson.
http://www.daytradeology.com/