"You mean, you were serious?"

You can just hear Greek Prime Minister Alexis Tsipras asking the European Central Bank that question after the ECB called his bluff and refused to advance Greek banks any more emergency funds, forcing them to close for at least a week and the Athens stock market to also suspend trading. Needless to say, Greece will default on a $1.7 billion debt payment to the International Monetary Fund that comes due June 30.

Until the ECB finally learned how to say No (or, in this case, Nein) over the weekend, Tsipras was confident that his following the J. Paul Getty school of financial negotiating ("If you owe the bank $100, that's your problem. If you owe the bank $100 million, that's the bank's problem") would work and that the ECB and its fellow official creditors to Greece would eventually knuckle under to his anti-austerity demands and continue to kick the can down the road yet again. END_OF_DOCUMENT_TOKEN_TO_BE_REPLACED

Notice I've already written off next week's Fed meeting as the first interest rate increase. While the minutes of the Fed's April 28-29 monetary policy meeting "did not rule out" the possibility of raising rates at the June meeting, it was "unlikely" that economic data would justify doing so by then. Nothing's happened in the meantime to change that. END_OF_DOCUMENT_TOKEN_TO_BE_REPLACED 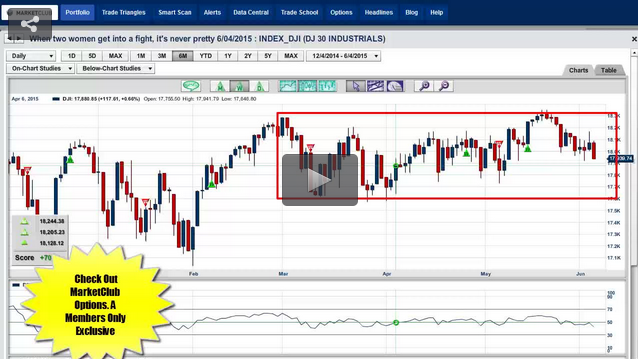