One of the most exasperating novels I've ever read is Of Human Bondage by W. Somerset Maugham. The "hero" of the novel, Philip Carey, is hopelessly infatuated with Mildred Rogers, an unattractive, sickly, boorish shop girl several social rungs lower than himself. She takes horrible advantage of the good-natured generosity and sincerity of Carey, who time after time bails Mildred out of one self-created problem after another, only to be kicked in the pants (figuratively, of course) for his trouble and good intentions. And yet he continually comes back for more.

While you're reading the book (or watching one of the movies based on it), you keep asking yourself: When the heck is Carey ever going to wake up and smell the coffee?

Does this sound like any current European crisis you may have read about recently in the financial media? END_OF_DOCUMENT_TOKEN_TO_BE_REPLACED

I am sure by now you have heard that the citizens of Greece voted no to austerity and the latest deal that was presented to their country.

Here's a question for you, how is it that a small country like Greece with only 6.6 million people can suck in so much money from the international banking community?

It may be just a normal part of the Greek culture that they use deception to get what they want. Look back in history it started with the Trojan horse that the Greeks used to enter the city of Troy and win that war.

More recently in order to gain entry and acceptance into the European Union in 1981 and to later adopt the euro as its official currency in 2001. This was all done with deception, as the Greeks stated that their debt to GDP was 5% when in reality it was 15% and on an unsustainable track. I am sure that the Greeks looked upon it as another Trojan horse and they got what they wanted.

To put this perspective, the Greek economy only accounts for 2/10 of one percent of the world economy. In other words, it's not an economic powerhouse by anyone's imagination.

The question now is with the contentious Greek finance minister Yanis Varoufakis resigning shortly after the 61.3% NO vote, can Greece make a deal. His departure/removal was a clear gesture by Prime Minister Alexis Tsipras that he wants to begin fresh debt renegotiation.

The vote is indicating that Greek people did not want, nor would accept more austerity for their poor beleaguered country. Who in their right mind would vote to hurt and punish themselves? It was a brilliant political move by Prime Minister Alexis Tsipras to call the referendum when he did.

Okay, now for the big question, what's this No vote going to do to the markets? END_OF_DOCUMENT_TOKEN_TO_BE_REPLACED

"You mean, you were serious?"

You can just hear Greek Prime Minister Alexis Tsipras asking the European Central Bank that question after the ECB called his bluff and refused to advance Greek banks any more emergency funds, forcing them to close for at least a week and the Athens stock market to also suspend trading. Needless to say, Greece will default on a $1.7 billion debt payment to the International Monetary Fund that comes due June 30.

Until the ECB finally learned how to say No (or, in this case, Nein) over the weekend, Tsipras was confident that his following the J. Paul Getty school of financial negotiating ("If you owe the bank $100, that's your problem. If you owe the bank $100 million, that's the bank's problem") would work and that the ECB and its fellow official creditors to Greece would eventually knuckle under to his anti-austerity demands and continue to kick the can down the road yet again. END_OF_DOCUMENT_TOKEN_TO_BE_REPLACED 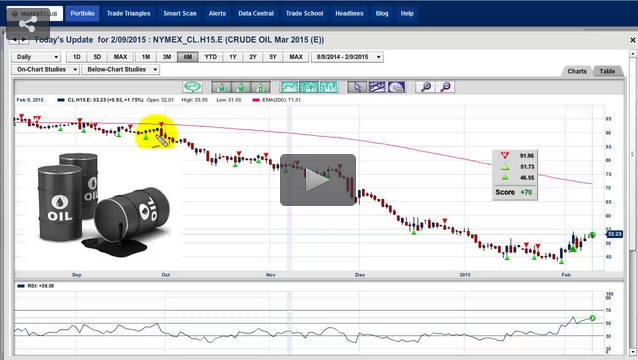 Unlike the United States, which is one nation with one currency and laws, the euro has been cobbled together with a number of countries that have nothing in common with each other. They don't speak the language, they don't have the same customs and traditions, and they certainly don't share the same discipline for work. END_OF_DOCUMENT_TOKEN_TO_BE_REPLACED

For many investors, this will feel too much like déjà vu by a half; the Greek woes are here yet again. And again, the Greek government is attempting to negotiate a new bailout deal with the Troika, even as European leaders debate whether or not to accede to that request. And, yet again, the question of a possible collapse of the European Currency Union emerges. However, unlike the last time, markets are reacting relatively calmly to the news of the breakdown of the current Greek bailout agreement. In part, that can be attributed to the lingering impact of the ECB’s Quantitative Easing program which was recently announced but it is also in part due to the broad belief that Greece would not likely exit the Eurozone. It seems investors’ two burning questions, i.e. will Greece leave the Eurozone and if it does, can the Eurozone survive, may be hard to disassemble. Nonetheless, it is a fact that, quite often, events in history can teach us as much about the past as about the future and it is those lessons which can help us disassemble those important questions.

Not the First Time for Greece

While the notion of Greece being the E.U.’s Achilles heel might sound like a story of only a few years past, the truth is it goes much farther back. This is the not the first time in relatively modern history that Greece has played a “spoiler” role, and since the Latin Monetary Union no longer exists, it’s not difficult to guess how the first saga ended. In 1865, the Latin Monetary Union became a framework of agreed currency exchanges set by its member states, e.g. Switzerland, Italy, France and Belgium; Greece and Spain joined a few years later. The monetary exchange system, which relied on the value of Gold, basically counted on each country to produce a coin at a specific gold weight that would be matched by all members, thus insuring a de facto single or one monetary currency. END_OF_DOCUMENT_TOKEN_TO_BE_REPLACED