After five weeks of steady gains is the market becoming a little too complacent and perhaps vulnerable to a sell-off?

It would appear as though the market is Teflon coated and has been brushing off bad news after bad news, particularly when it comes to the world's precarious political situation. In today's video, I will be examining all three indices and show you what I'm looking at right now, and I will also point out where the red line is in each of these indices. 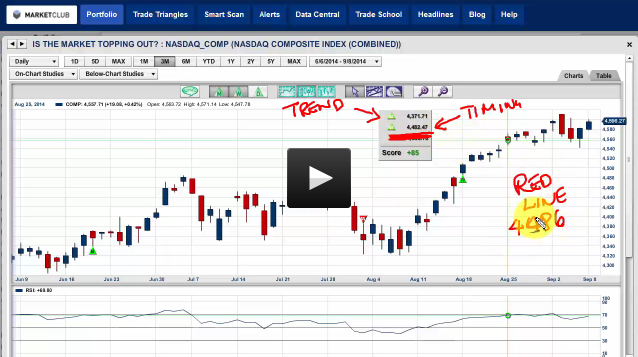 All eyes on Apple

If you've been living anywhere on this planet then, you probably know that tomorrow is Apple's big day. Apple Inc. (NASDAQ:AAPL) is set to unveil its latest and greatest creations tomorrow. In my opinion if Apple comes up with anything other than a real game changer this stock may have topped out. END_OF_DOCUMENT_TOKEN_TO_BE_REPLACED 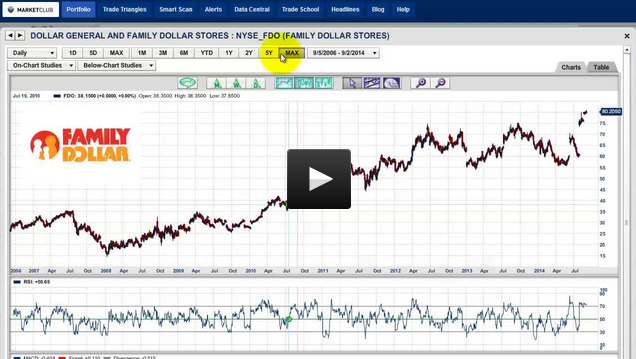 In today's video, I'll show you how MarketClub's Trade Triangles nailed both of these stocks and how they got this trade right. I will also show you why I think Dollar General is going to have to up its bid – big time if it wants to acquire Family Dollar Stores. Last week, Dollar General said it remained committed to making this acquisition, however Dollar General's earnings and same-store sales fell short of market expectations. What does this mean? Is Dollar General reaching out for Family Dollar Stores now while its stock is still relatively high? I think so.

I have a feeling this is going to be an interesting week so stay tuned.