I think with all the shorting going on, and the group that says "Ford can't possibly go much lower...I'm buying some", we all need to think about the contrarian point of view. For some of us that might be finally biting the bullet and saying "YES the economy is in trouble...I'm shorting!" Yet for others they think, "no chance the Dow continues to bomb like this, Obama will change the economy." Whatever your position, you need to understand exactly what goes into the contrarian mindset and I've asked Jon Lee from WeeklyTA.com to come and enlighten us a bit!

A contrarian believes that certain crowd behavior among investors can lead to exploitable mispricings in securities markets. For example, widespread pessimism about a stock can drive a price so low that it overstates the company's risks, and understates its prospects for returning to profitability. Identifying and purchasing such distressed stocks, and selling them after the company recovers, can lead to above-average gains. Conversely, widespread optimism can result in unjustifiably high valuations that will eventually lead to drops, when those high expectations don't pan out. Avoiding investments in over-hyped investments reduces the risk of such drops. – Wikipedia

"Whenever you find yourself on the side of the majority, it's time to pause and reflect."
– Mark Twain

What is the “Crowd”? They are the group of non-performing institutions, individual investors, traders, speculators, and other players in any market that form a collective opinion that is expressed in the terms of a degree of optimism or pessimism. We will call them the non-professionals.

The professionals are the “smart money”. These are the very few  that are aware of crowd behavior and are able to adjust their strategies (long and short) to profit from extreme sentiment. Note: professional does not mean institution by definition. Most institutions are part of the crowd.

Here’s a diagram I created to illustrate the above point: 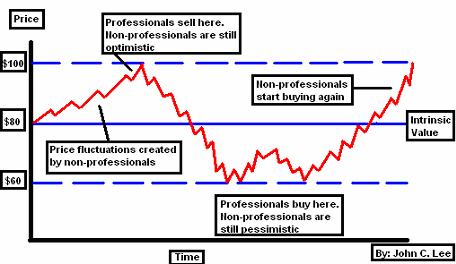 How does this work? Some might argue that if everyone’s buying and extremely positive, then why would the market crash? The answer: as more and more investors buy, the market will become fully invested. The last ones buying are the ones that bought into the market when the professionals were selling and will be stuck because of this overhead limit. After everyone’s bought, there won’t be anyone left to sustain the buying. Therefore, a fearful panic ensues and the masses start to sell, most of the times much later than they should have done.

A recent example of massive cash inflow (totaling hundreds of billions of dollars) is shown below. Note that the peak of the NASDAQ was on March 10, 2000 at 5,132.52 at nearly the same time when the largest monthly in flow occurred. Clearly, everyone was invested at the full limit. 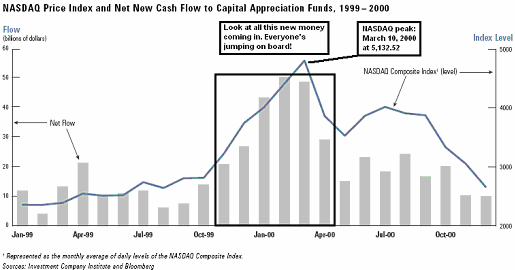 The Media’s Portrayal of “Professionals”: An Observation in Barron’s April 28th Issue

This is the “Back in the Pool” issue with the funny-looking bull cartoon testing out the pool’s temperature. Barron’s surveyed “professional” investors and here were some “crowd-like” results:

These questions were the biggest eye-poppers: 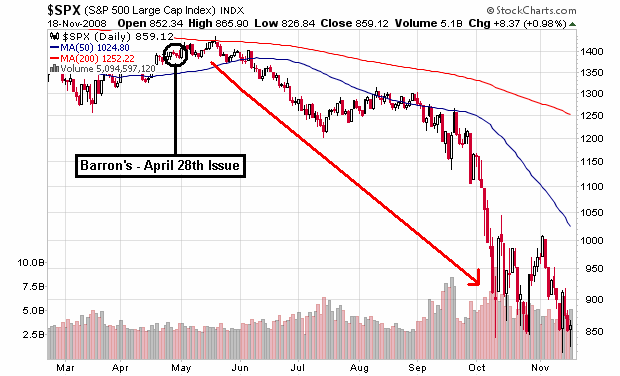 The media’s definition of “professional” is not always correct so please be aware of the difference. The market is down over 40% year-to-date, so obviously the results have now changed dramatically.

"The fastest way to succeed is to look as if you're playing by somebody else's rules, while quietly playing by your own.” – Michael Konda

•    Buy when media headlines read the absolute worst and there is no sentiment divide among investors. Once sentiment becomes entirely pessimistic, buy. Also look out for a bottoming of new capital in flows into stocks. Historically, the good time to buy was when capital in flows were between 10 -15%.
•    Sell when everyone is overly bullish and capital in flows into common stock & mutual funds reach a high. (In 1960 the market declined 18%, in 1962 -29%, in 1966 -27%, and in 1968 -37%, while stock ownership levels were between 32- 34%, the highest ever. In 1999-2000, stock ownership levels were at 31-33%, near an all time-high)
•    Don’t fight the trend. If the primary trend is down, go short. If the primary trend is up, go long. Why fight the long-term direction of the market?
•    Watch financial networks and read newspapers and magazines to get an idea of where sentiment levels are. Magazine covers are my favorite.

“Follow the path of the unsafe, independent thinker. Expose your ideas to the dangers of controversy. Speak your mind and fear less the label of 'crackpot' than the stigma of conformity. And on issues that seem important to you, stand up and be counted at any cost.” – Thomas Watson

It’s safe to say that following the real professionals is the way to go. In order to do that, you have to know how they play. There are three points that I stress: 1) there is tremendous pressure and influence to join the crowd and gain easy acceptance, 2) the crowd is wrong the majority of the time, 3) under duress, psychologically, our emotions and objectivity can become distorted and cause us to rationalize (a dominant coping mechanism) or deny (a dominant defensive mechanism) even the basic realities of truth.

Investors will be able to join the crowd when appropriate, but remain flexible to leave the crowd at times when the market warns us. I encourage each investor to respect the nature of human weakness and to become a free-spirited independent thinker.