Although trading last week was limited to four trading days due to a holiday weekend gold had a deep and severe price decline.

Gold lost approximately $74 in trading this week opening at approximately $1814 on Tuesday and settling at $1741 Wednesday. Last week’s price decline resulted in gold devaluing by 4%.

The Friday before last, gold opened above and closed below a support trendline that was created from two higher lows. The first low occurs at $1679 the intraday low of the flash crash that occurred in mid-August 2021. The second low used for this trendline occurred in the middle of May when gold bottomed at $1787. 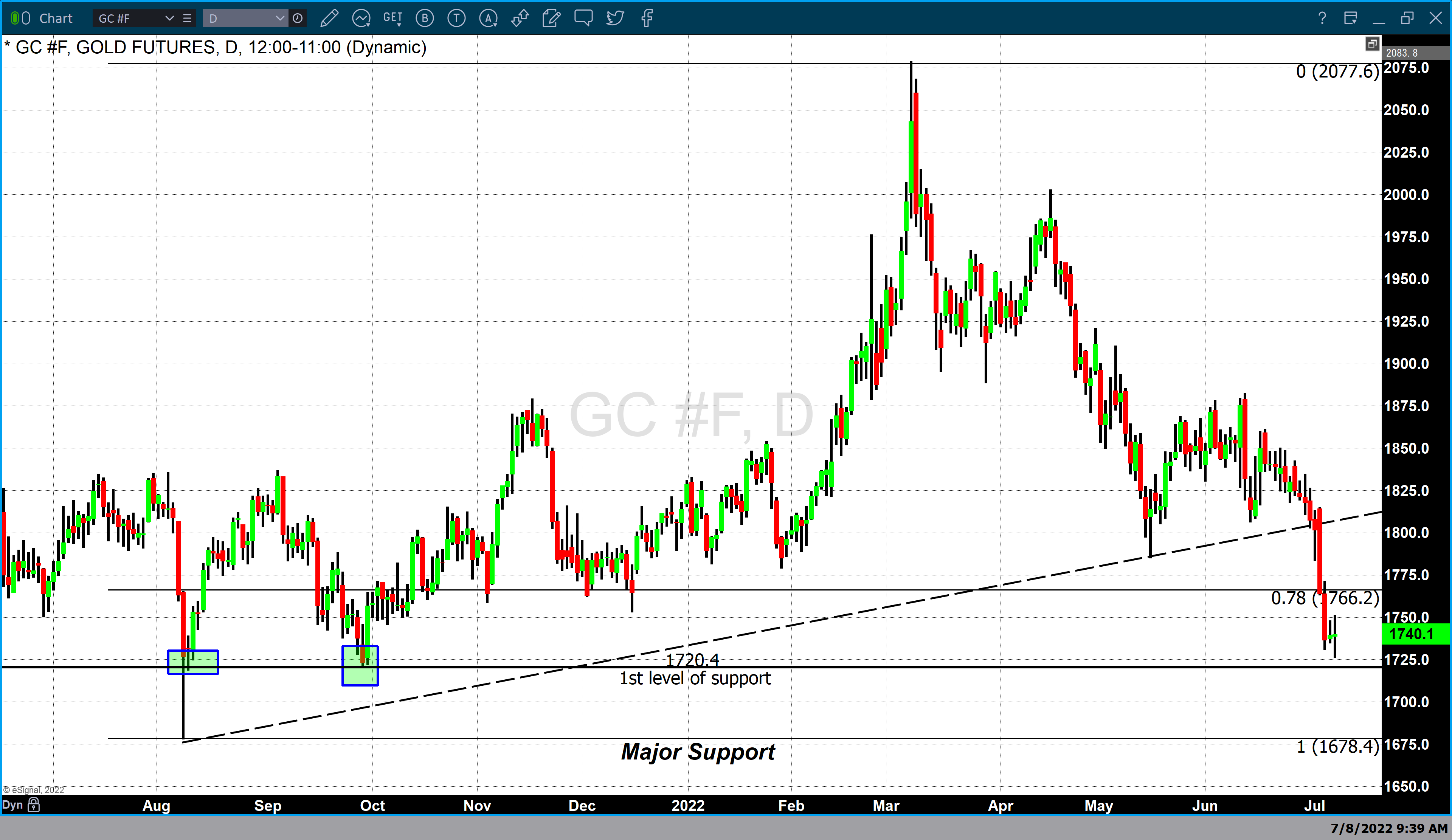 Gold closed just below that trendline one week ago, however it was Tuesday's exceedingly strong price decline of $50 that accounted for two-thirds of last week’s price decline and resulted in major technical chart damage. 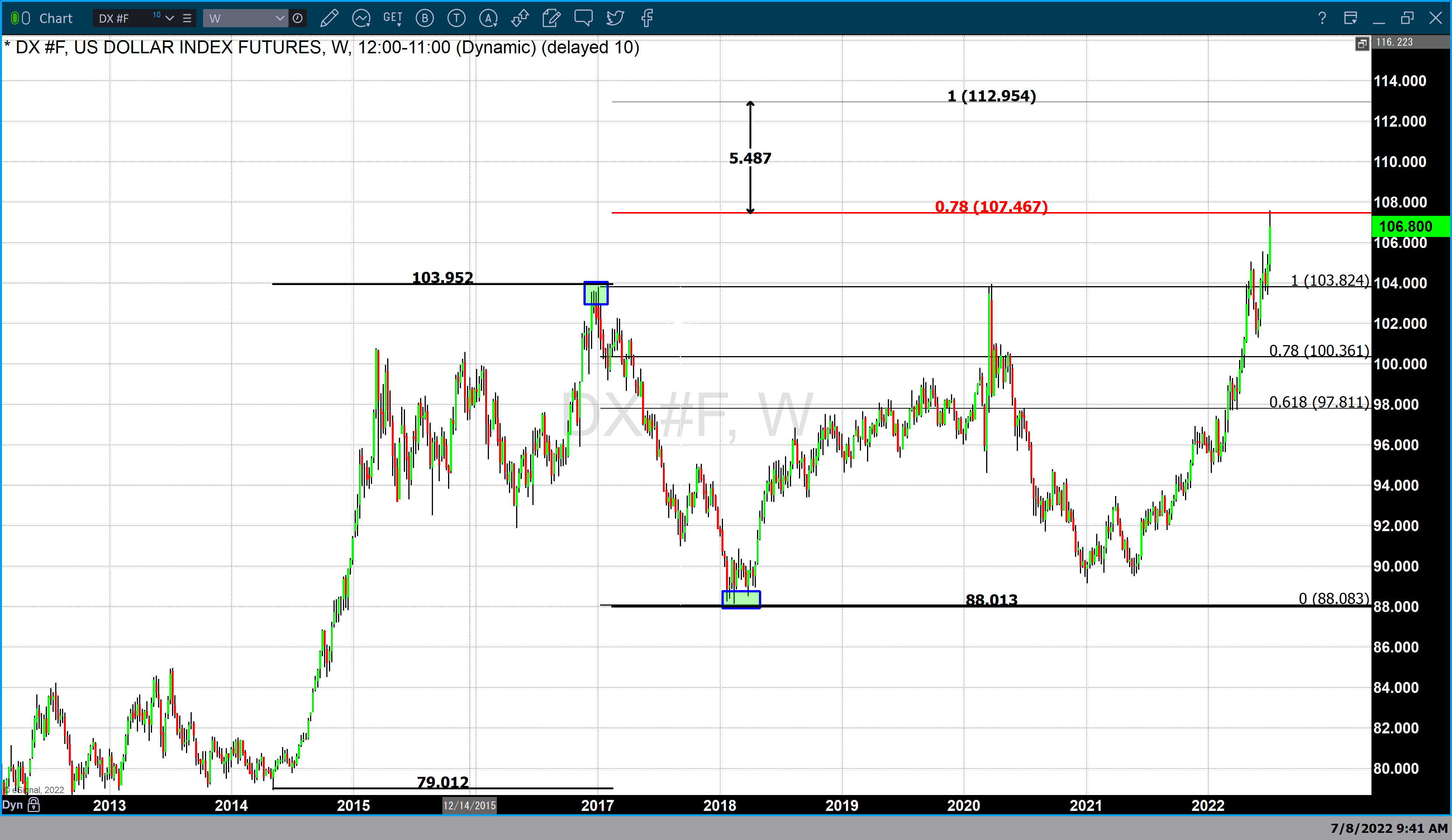 The primary force that moved gold substantially lower last week was dollar strength. The dollar index gained well over 2% last week accounting for over half of the price decline in gold.

Friday’s jobs report was forecasted to show that 250,000 jobs were added to payrolls last month. The actual numbers came in well above expectations with 327,000 jobs added last month. The unemployment level remained at 3.6%.

The fact that the actual jobs report came in above expectations strengthened the hand of the Federal Reserve to continue to raise interest rates substantially this month.

According to the CME’s FedWatch tool, there is a 93% probability that the Federal Reserve will raise rates once again by 75 basis points this month.

However, there are three more times that members of the Federal Reserve will convene for an open market committee meeting which leaves the door open for additional rate hikes. Because the Federal Reserve is data-dependent the number and size of the rate hikes will be based upon whether or not there is a substantial decrease in inflationary pressures.

But the results of last week’s elections, which returned control of the House to the Democrats, may put future rate increases next year in doubt. That bodes well for long-term Treasury bond prices – i.e., yields may have peaked.

As we know, Maxine Waters, D-California, is now the likely next chairman of the House Financial Services Committee. To put it mildly, she doesn’t like banks. Her first order of business, no doubt, is to impeach President Trump, as she’s said countless times. But a more realistic second goal will be to roll back all or most of the recent bank regulatory measures made so far by the Trump Administration, which, of course, rolled back much of the regulatory measures passed under the previous administration, mainly through the Dodd-Frank financial reform law.

If she’s successful, that will reduce the mammoth profits the banks have been making the past several years, which were boosted further by the Republicans’ tax reform law. That sharply reduced corporate income tax rates, not just for banks but all companies, although the banks seem to be the biggest beneficiaries. No doubt Waters and her Democrat colleagues have that in their gunsights also.

But that won’t be the end of it. END_OF_DOCUMENT_TOKEN_TO_BE_REPLACED

Apparently, the bond market just got the email that the U.S. economy is smoking and that interest rates are going up.

The yield on the benchmark 10-year Treasury note jumped 17 basis points last week to close at 3.23%, its highest level since March 2011. The yield on the 30-year bond, the longest maturity in the government portfolio, closed at 3.41%, up an even 20 bps.

The pertinent questions are, what took so long to get there, and where are yields headed next?

Analysts and traders pointed to the Institute for Supply Management’s nonmanufacturing index, which rose another three points in September to a new record high of 61.6. The group’s manufacturing barometer, which covers a smaller slice of the economy, fell 1.5 points to 59.8, but that was coming off August’s 14-year high.

Bond yields jumped further after the ADP national employment report showed private payrolls growing by 67,000 in September to 230,000, about 50,000 more than forecast. It turns out the ADP report didn’t precursor the Labor Department’s September employment report, but it was still pretty strong. Nonfarm payrolls grew weaker than expected 134,000, less than half of August’s total of 270,000, but that number was upwardly revised sharply from the original count of 201,000, while the July total was also raised to 165,000. The relatively low September figure was blamed not on a weakening economy but on the fact that employers are having trouble finding workers. Meanwhile, the unemployment rate fell to 3.7% from 3.9%, the lowest rate since December 1969.

Federal Reserve Chair Jerome Powell sent investors home happy for the weekend last Friday when he outlined a fairly balanced plan of interest rate increases designed to fight inflation while avoiding throwing the economy off track. Nevertheless, some economists at the Fed itself appear to believe that the central bank may not be taking the threat of inflation seriously enough.

In his prepared remarks for his speech at the Kansas City Fed’s annual policy symposium in Jackson Hole, Wyoming, Friday, Powell indicated that he’s not overly worried about rising inflation, or at least not enough to be more aggressive about raising rates to avoid piercing a hole in the economic balloon just as it’s starting to expand.

“While inflation has recently moved up near 2%, we have seen no clear sign of an acceleration above 2%, and there does not seem to be an elevated risk of overheating,” the Fed chair said. Moreover, he said the Fed has to balance “moving too fast and needlessly shortening the expansion, versus moving too slowly and risking a destabilizing overheating. I see the current path of gradually raising interest rates as the approach to taking seriously both of these risks.”

That was enough to push the S&P 500 to its first record close since January 26 and the yield on the benchmark 10-year Treasury note to 2.81%, which is down about 20 basis points from its recent peak of 3.00% at the beginning of this month. END_OF_DOCUMENT_TOKEN_TO_BE_REPLACED

Yet Powell and the seven other voting members of the Federal Open Market Committee saw fit to raise the federal funds rate by a quarter percentage point to a range between 1.5% and 1.75%. Not only that, but the FOMC stuck to its guns and indicated a steady diet of rate increases over the next three years, pushing rates closer and closer back to what used to be normal before the global financial crisis. After three rate increases this year, three more are likely next year followed by two more in 2020, which would boost the fed funds rates to a range of 3.25% and 3.5%.

And yet the world didn’t end. In fact, the yields on Treasury securities actually fell after the meeting ended on Wednesday afternoon. The 10-year note, the bond market’s long-term benchmark, trading just below 2.90% on Tuesday, fell five basis points after the meeting to 2.85%. The yield on the two-year note, which is more sensitive to interest rate changes, dropped seven bps after the meeting. END_OF_DOCUMENT_TOKEN_TO_BE_REPLACED