A few weeks ago, I asked if you believed the current rally was here to stay. At that time, the market had been rallying since the middle of June. Some market participants were calling the June low 'the bottom.'

Time will tell if June was the bottom, but based on what has happened over the last two weeks of August, I am betting that we have not yet seen the bottom.

Let's review quickly what just occurred. The Federal Reserve's President, Jerome Powell, told the country that there would be "some pain" in the coming months. Powell also said that the Fed would "keep at it until the job is done," referring to getting inflation under control.

Powell didn't detail how severe the pain would be or how businesses and households would feel it. Still, I think it is safe to say that Powell acknowledges we are likely heading towards a recession.

Not only is the NASDAQ down double digits, but the exchange-traded funds that track the major indexes, The SPDR S&P 500 ETF (SPY) and the Invesco NASDAQ QQQ ETF (QQQ), are both now trading below their 50-day averages. That is in addition to them already having given up their 200-day, 100-day, and 20-day moving averages.

Furthermore, economist after economists, jumped on the 'recession is imminent', bandwagon this past week. Most of these economists have even pointed out that the Federal Reserve has miscalculated the intense inflation we are experiencing.

They were referring to when the Fed told us back in the spring that the inflation we were experiencing at that time was "transitory." The Fed was wrong about that, and it is unlikely that the Fed members want to be wrong again by underestimating the persistence of current inflationary causes.

Due to their previous missteps, many believe the Fed will not take its foot off the gas quickly enough. This makes it unlikely the economy will experience a soft landing which we have been hearing about over the past few months.

And if you don't know the opposite of a 'soft landing' in economics, it's a recession. END_OF_DOCUMENT_TOKEN_TO_BE_REPLACED

Do you believe the current market rally is here to stay?

That belief would mean that despite two consecutive quarters of negative Gross Domestic Profit numbers and the Federal Reserve continuing to increase interest rates as a method to bring down inflation, which is at a level that we have not seen since the 1980s, we actually are not currently staring down the barrel of a recession.

There are economists and market participants currently on both sides of the argument of whether or not we are heading towards a recession.

I am not personally confident enough to invest based on where I think we are heading in the short term. But I still like to know what is available for me to buy if the tide seems to be turning one way or the other.

As I mentioned, I would like to give you a few ETFs that would make you money if the market turns negative. These ETFs are all inverse or leveraged funds, meaning they will experience contango if held for longer than one day. Lastly, I would also like to point out that these ETFs, if used correctly, could help investors hedge their portfolio’s against a market correction.

The first few I would like to mention are the basic inverse ETFs that track major indexes. The Direxion Daily S&P 500 Bear 1X Shares ETF (SPDN) tracks the S&P 500 and will increase in value daily if the S&P 500 goes lower. 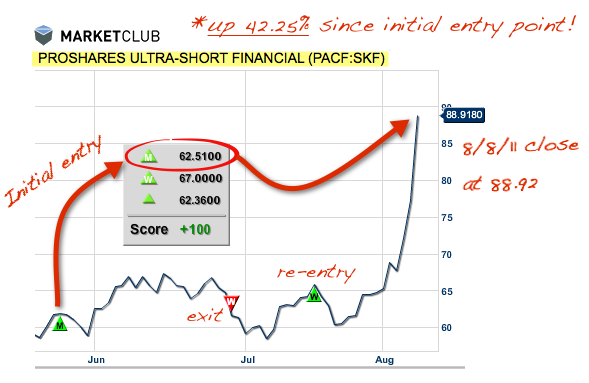 It would almost seem like MarketClub's Trade Triangles could see into the future, but you won't find any mumbo-jumbo or "black box" technique hiding behind our symbols, just market-conquering technical analysis.

If you tuned into last week's MarketClub TV show, you heard Adam talking about the Proshares Ultra-Short inverse etf, SKF.

Even if you didn't get in until the morning after Adam talked about it on MarketClub TV, you STILL be up 28.33%!

I don't think we could make it any easier if we tried.

Every success in this crazy market,