I'm confident that there are thousands of blog lurking gold bugs who are going to want to comment on this article from Mark Leibovit of VRGoldLetter.com. Mark hits on a number of issues, which include a possible conspiracy theory. Mark will be on PBS tonight talking about Gold, and if you visit VRGoldLetter.com, be sure and use the promo code "INO" for a discount.

But more importantly read the piece below and let the comments fly! It's time for all of those blog lurkers to make their thoughts and opinions known!

In the short term, the precious metals, especially Gold, are trading counter to the stock market, but we have also seen precious metals rally along with stock market during the 2003 and 2008 bull cycle.  Regardless, in the long-term, precious metals should rally because of currency debasement and the resulting inflation which follows.  I have recently inaugurated the VR Gold Letter (which covers most other metals as well) to focus on the unique opportunity ahead in the natural resource arena.

Heretofore, Gold has been rallying recently, even when the US Dollar Index rises, as investors seek its safety because both stocks and bonds are falling. A stock market rally and any greater intervention by 'Helicopter'  (or is it 'B-52') Ben Bernanke could change this. Overall the bear market in stocks, huge budget deficits, increased government spending, and nationalization of the banking system has led many investors seeking the safety of gold. Ultimately, the objective here is to protect ourselves from fiscally irresponsible central governments, not to mention the risk of their bankruptcy. Gold will never go to zero and history shows Gold as the ultimate and longest lasting store of value - not worthless fiat currency. I want to be long on the day when gold gaps up $500 an ounce and you can't buy it at any price. The world's largest debtor nation is trying to solve its debt created crisis with more debt! The risk is on the table that our own US Treasury could default on debt and even greater risk that the rest of the world will not buy our debt realizing our country may never be able to pay them back. Skeptics says that is nonsense as they can always print more money. It is clear this cannot go on for long without paying the consequences for such irresponsibility. Once central governments (ours included) realize that running the printing press 24/7 debases currency and ultimately leads to significant if not 'hyper' inflation - the only solution is a Gold standard. Alan Greenspan himself has said that "You didn't need a central bank when you were on a gold standard."

The United States has the largest gold supply in the world, estimated to about 261 million ounces, unless there is another huge fraud being perpetuated on the American public at Fort Knox. I have gone out on the limb in the absolute belief the United States will return to the Gold standard which was abandoned back in 1971 by then President, Richard M. Nixon. If the United States allows the Gold price to rise (or drives it higher) and then pegs the US Dollar to an inflated Gold price, a great deal is accomplished. The ever-growing United States debt now has collateral. The national debt would now be on its way to being balanced. If the national debt is 10 trillion dollars and Gold is trading at $10,000 an ounce, the United States now has 2.6 trillion dollars in Gold or roughly a 25% backing. My belief is that the size of the United States Gold reserve is much greater than reported and what the United States doesn't have it can easily confiscate either by demanding redemption of Gold from private holdings, or by creating a new North American currency (the rumored 'Amero') which would then include very valuable mineral resources of Canada and Mexico. Though the latter event currently appears very unlikely, the former could easily occur.

A run on Gold and Gold assets was one of the triggers that helped grow our fledgling nation. Recall, the California Gold Rush of the 1840s and the resulting migration and expansion of the United States toward the Pacific Ocean. We're headed for another Gold rush! This is not the 1840s, but Gold could (and will, in my opinion) become the next driving force, the next 'bubble' so to speak. It will become the internet shares of the new millennium. Just as US home prices soared ten times in value, just as internet stocks soared ten and in some instances 100 times in value, and just as the Dow Industrials soared rising from the 1982 to 2000 over ten times in value, i.e., from 1000 to 10,000, Gold, my friends is next! Recall, the Dow Industrials traded between 800 and 1000 for many years (1966 to 1982) with 1000 being a supposed 'insurmountable' barrier. When we finally cleared 1000, we were off to the races and 1000 became the floor! Think of Gold in the same terms. Once it blasts through, there is no stopping it. Buy your ticket for the Gold Express and sit back and enjoy the wild ride ahead!

A story from the London Times speculates whether there is any Gold in Fort Knox - said to be the most impregnable vault on Earth which is built out of granite, sealed behind a 22-ton door, located on a US military base and watched over day and night by army units with tanks, heavy artillery and Apache helicopter gunships at their disposal.  The worry is that no independent auditors appear to have had access to the reported $137 billion (96 billion) stockpile of brick-shaped gold bars in Fort Knox since the era of President Eisenhower. It has been several decades since the gold in Fort Knox was independently audited or properly accounted for, said Ron Paul, the Texas Congressman and former Republican presidential candidate.  "The American people deserve to know the truth.  Mr Paul has so far attracted 21 co-sponsors for a Bill to conduct an independent audit of the Federal Reserve System - including its claims to Fort Knox gold - but an organization named the Gold Anti-Trust Action Committee (GATA) is taking a different approach. A month after President Nixon resigned over the Watergate affair Congress demanded to inspect the contents of Fort Knox but the trip to Kentucky was dismissed by critics as a photo opportunity. Three years earlier Mr Nixon brought an end to the gold standard when France and Switzerland demanded to redeem their dollar holdings for gold amid the soaring cost of the Vietnam War.  Many gold investors suspect that the US has periodically attempted to flood the market with Fort Knox gold to keep prices low and the dollar high - perhaps through international swap agreements with other central banks - but facts remain scarce and the US Treasury denies that any such meddling has gone on for at least the past decade.

We already know from Paul Craig Roberts was Assistant Secretary of the Treasury in the Reagan administration saying: "How long can the US government protect the dollar's value by leasing its gold to bullion dealers who sell it, thereby holding down the gold price?"  In other words, manipulation of the Gold market is an old, old story. The fear that Gold will return to its rightful place as the store of value and the basis for valuing all monetary transaction is so great, anything will be said and done to suppress it.  You and I know when once again becomes the world monetary standard, printing presses will come to halt and sanity will return to an insane world addicted to credit and indebtedness.

There have also been rumors of a possible secret agreement between the United States and China and Japan pledging access to this country's gold bullion in the event we default on our debt or should hyperinflation occur.  This apparently occurred following China's concern for our mismanagement of our economic affairs.  Recall, Chinese Premier Wen Jiabao said, hes worried about Beijings vast holdings in US-Treasuries and wants assurances that the investment is safe. We have lent a huge amount of money to the United States. I request the US to maintain its good credit, to honor its promises and to guarantee the safety of Chinas assets. Of course we are concerned about the safety of our assets. To be honest, I am a little bit worried.

Another story circulating that last week the ETF GLD holdings were unchanged at 1,127 tons. The ECB reports that one central bank sold 0.63 tons worth 14 million euros. Deliveries have taken the registered category in silver down from 80 million ounces in December to 63 million. It could be that SLV is getting silver from the Comex out of HSBC warehouses.  That means SLV is short silver probably because they cannot buy and get delivery, so  with slight of hand they borrow it. This could prove explosive as silver rises sharply or if  major other deliveries take place. The paper market is a disaster waiting to happen. This is why we have repeatedly cautioned about FIRST taking delivery of the physical Gold and Silver and not relying on GLD, IAU, or SLV or equivalents when investing.  We do like Central Fund of Canada (CEF) more, but it is not a replacement for the physical metal.

The contrarian in me says this break in Gold into the 800s is a 'gift', but between negative cycles and the lack of upside volume, I'm picking and choosing real carefully.

Here is another perspective.  When traders look to the technical backdrop of gold or any other commodity or equity, there is always reference made to support and resistance levels, price patterns, etc.  One of the most neglected, yet most valuable tools is time.  It is one thing to say that gold should find support at this level or that level, but WHEN should it get there?  Think of technical analysis as a three legged stool.  One leg is the price action (support, resistance, momentum indicators, etc.).  The second leg is pattern, as in what patterns are being formed by the price action (Elliott wave, wedges, triangles, etc.).  The third leg is TIME.  When will price reach its objective, or better yet, when can we look for turning points?  Without any one of the three legs, the complete technical analysis stool is difficult to balance.  The concept of pattern, price, and time has been explored and written about in detail by Robert Miner.  In today's example, we will take a broader look at time cycles in the gold market followed by a close up look at where we are now with regard to pattern, price, and time.

The chart below shows a longer term view of a dominant time cycle in gold.   The cycle lasts roughly 4 months and is usually culminated by some sort of reaction in the price of gold.  It does not necessarily lead to a change in trend, but at the very least a reaction, or price correction against the prevailing trend can be expected.  Notice the small green circles in the chart that show how price reacted around the cycle change points.  In each case, a close up look at price and pattern would give reliable clues as to whether price would merely correct or if a trend change was developing.  Remember  - whenever looking at technicals, use a `weight of the evidence' approach.  Do not rely on only one indicator.  Always use time as one piece of evidence as to when major reaction points can be expected.  Looking at the chart, you can see that the four month cycle came in on Tuesday, April 7.  So that tells us to be on our toes looking for a reaction of some sort in this time frame.

At the same time, a glimpse of our proprietary Annual Forecast Model for Gold shows the current cyclical picture, so it appears a bounce may be temporary. 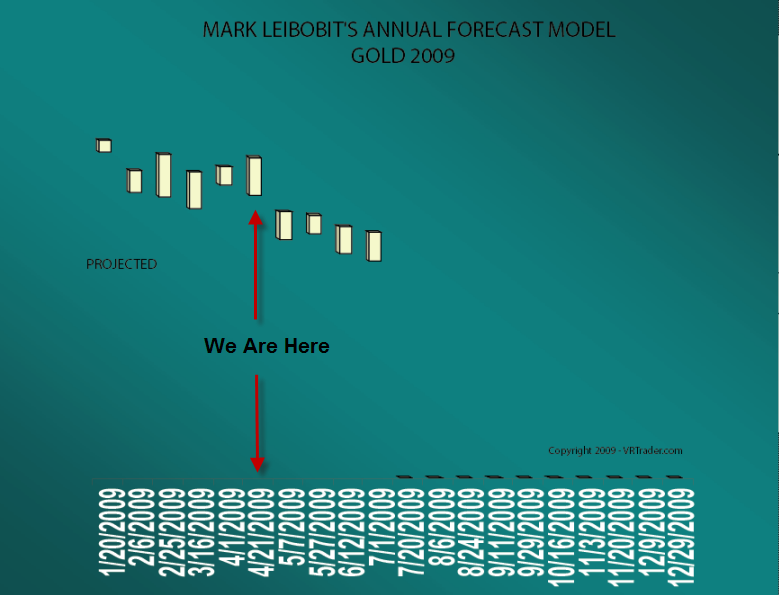 For the balance of the cyclical forecast please go to VRGoldLetter.com or VRtrader.com if you do decide to become a member use the promo code "INO" for a discount.