In my position I'm blessed to have access to dozens of top traders and investors, Adam being the BEST (in my humble opinion) and one guy I can always turn to is Mark McRae. Mark has taught us many times over the past year (see previous Mark McRae posts) and today I asked him back for your benefit! He's recently released a new trading report that's more of a mini-course then a one time report, so it'll be updated with ALL his latest findings. Please enjoy the article, ask Mark questions in the comments, and jump on his new trading report/mini-course!

One of the most basic and widely used indicators is that of momentum.

Before I go on to tell you how we can use the momentum indicator to trade with, I want to explain the difference between a leading and a lagging indicator.

Nearly all indicators are lagging indicators. That is to say that the price must first move in order for the indicators to react. So you will inevitable get a situation e.g. where the market will rise shortly followed by the indicator. This is where the term lagging comes form in trading.

You can use most indicators as both depending on how you mix them with time frames and settings. The reason I mention this is that momentum can be a very good leading indicator when used in a particular way.

Let's first talk about what a momentum indicator is - simply a visual reference point of whether a security is rising or falling and how fast that rise or fall is.

Construction of the indicator is simple - just subtract the close of the security X (whatever period you want)days ago from today's close.

As you can see from our first chart, momentum can be a very good confirmation indicator. If you were using a moving average or a trend line to help determine trend, then a cross above or below the zero line could be just the confirmation you need. 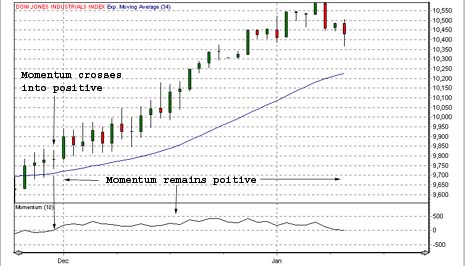 In our next chart there are two important points I want you to take note of - the first is that of divergence. 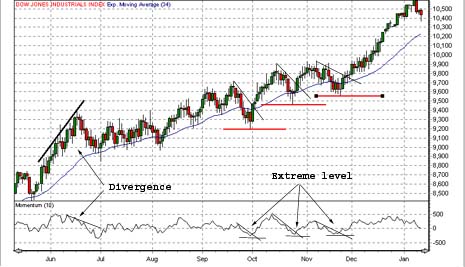 Divergence is when an indicator does the opposite of what the price on the chart is doing. In our example the momentum indicator started to turn down but the price continued up. This is bearish divergence. Often when this happens it is an early warning that the market is in an exhaust move. The indicator is giving us an advanced warning that the market might be getting ready for a move in the opposite direction from which it was previously heading. The opposite is obviously true for bullish divergence.

You could further confirm this by a shorter moving average crossing a longer average or as I have done with a little trend line. Nice, simple technique that will keep you on the right side of the trend and give you some great entry points.