In my position I'm blessed to have access to dozens of top traders and investors, Adam being the BEST (in my humble opinion) and one guy I can always turn to is Mark McRae. Mark has taught us many times over the past year (see previous Mark McRae posts) and today I asked him back for your benefit! He's recently released a new trading report that's more of a mini-course then a one time report, so it'll be updated with ALL his latest findings. Please enjoy the article, ask Mark questions in the comments, and jump on his new trading report/mini-course!

One of the most basic and widely used indicators is that of momentum.

Before I go on to tell you how we can use the momentum indicator to trade with, I want to explain the difference between a leading and a lagging indicator.

Nearly all indicators are lagging indicators. That is to say that the price must first move in order for the indicators to react. So you will inevitable get a situation e.g. where the market will rise shortly followed by the indicator. This is where the term lagging comes form in trading.

END_OF_DOCUMENT_TOKEN_TO_BE_REPLACED

One of our most requested Guest Bloggers is Mark McRae, author of Traders Secret Code, and today I'd like you all to welcome him back! I've asked Mark to touch on a subject that most seasoned traders know, and rookie traders don't want to hear...most traders fail and a percentage of those failures turn into bankruptcy! Please read the article, comment to Mark or about the ideas, and check out Marks Traders Secret Code.

I was thinking about an article I read some time ago that 90% of traders who ever trade lose their account and that 10% actually go bankrupt. If the first number doesn't scare you then the second definitely should.

Why is it then that there is such a large number of traders failing? It is not because they are stupid; in fact most traders have an above average IQ and are above average in most categories such as education and income. So why do they fail?

By education I don't just mean learning how RSI works or drawing lines on a chart. I mean thoroughly educating yourself in all aspects of your chosen profession.

This, my friend, is where I hope to be of some help. I don't have all the answers nor do I profess to be some kind of guru but I will do my best to point you in the right direction.

END_OF_DOCUMENT_TOKEN_TO_BE_REPLACED

So I wanted to give you the chance to learn from Mark again. This time I asked him to go into the Parabolic SAR and the trading system that goes with it. Adam is a HUGE fan of the SAR, as you know, and I think this post will help you see why Adam and Mark both use it. Don't forget to swing by SureFireTradingChallenge.com and give Mark your feedback there.

This particular technique has been around a long time and is still widely used by many analysts because of its adaptability to most markets.

The parabolic time/price system was first introduced by J. Welles Wilder Jr. in his book 'New Concepts In Technical Trading Systems'. It is very often referred to as the SAR system meaning stop and reverse. This means when a stop is hit the system reverses so it is permanently in the market.

The actual point at which the system is reversed is calculated on a daily basis (or whatever time period you are looking at) and the stop moved to create a new reverse point. The SAR point never backs up.

In other words if you are long the market the SAR point will increase every day. The same is true for short positions. This is the time part of the system.

It is beyond this lesson to give the exact calculation of the acceleration factor and it is not really necessary to know the formula as most charting services now incorporate the system in their indicator range. 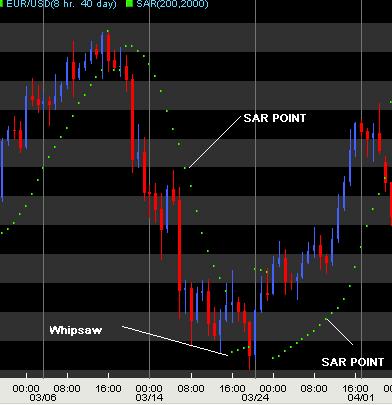 My Use Of SAR

Here's the problem! It doesn't perform very well in the markets I have tested it on nor do I know any traders who trade it as a stand-alone system. Maybe in the markets of the past it would have worked well but not so now. The problem is there is just too much whipsaw.

Now you may be asking if there is too much whipsaw why mention the system at all? Good question and here are two reasons I find a good use for the system.

* The system can be very effective if a filter of some sort is used. In the example below of the eur/jpy I have used a MACD as a filter. If we were long the market then only long signals would be taken and the short signals ignored as long as the filter (MACD in this case) remains long. If a short signal is triggered but the filter still remains long you could close the position and wait for the next long signal. The reverse is true for short positions. You could use any oscillator you feel comfortable with or even trend lines. 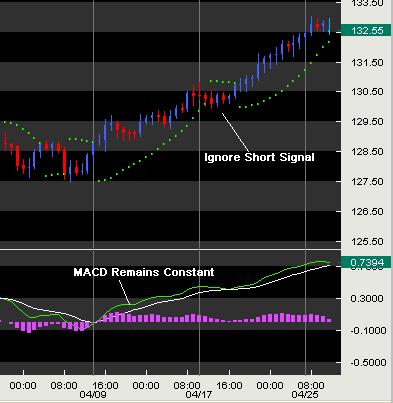 * Sometimes it can be very difficult to find a good place to put your stop. With the SAR system you will always know exactly where to place a stop and it will increase everyday to help lock in profits. It also gives the move enough room for market corrections without taking you out of the position. I like this particular method if I have a long-term position which; I only want to check on once a day. I can quickly check how the position is and then move my stop accordingly.

I am sure you can find many other uses for the SAR system and its well worth playing around with the parameters to see if it can be added to your trading arsenal.

Be sure and visit SureFireTradingChallenge.com to learn more about Mark and the contest!

Today I'd like to welcome back Mark McRae from SureFireTradingChallenge.com. I personally have known Mark for over three years, with Adam knowing Mark well over 5, and Adam and I both agree that Mark is truly an innovator and one of the hardest working traders we know. His latest project, SureFireTradingChallenge.com, kept him holed up with charts and traders from all around the world to find some of the best methods in the world for trading. Check it out here.

Now his blog post today is more applicable now then it ever has been...support and resistance! Let me let Mark teach you a bit more:

I have found a double use for my method of identifying these points - They are also Swing Points!

You may think you know where Support and Resistance is, but do you really?

How do you know where support and resistance really is?

The problem with Support and Resistance (S&R) is that it is not a definite number. It is not an exact point on the chart at which price will, without any hesitation stop.

In fact S&R is actually an area - it is not an exact number as we would all like to think.

Try telling your broker that you want a stop loss at somewhere between 50 and 55 and watch him burst a blood vessel.

This is what I want to concentrate on in this lesson. This is a technique I have found to be particularly good at not only identifying strong S&R points but also swing points.

In order to find S&R we must first identify market swing points. There are various ways of doing this but I am going to use the one I have used for years.

For the purpose of swing points we are not interested in the open or close of the bars only the high and low.

This can be particularly useful if the market is trading sideways and you are trying to determine the breakout point. There may be many peaks and valleys but for me there is only one real point - that is the most recent swing up or swing down.

Look at the next diagram

You can see that although there were a few highs and lows that you could have taken as support or resistance, but it wasn't until bar (M) that a definite swing point had been identified and you could mark bar (K) with an (S).

To work out the swing down point - take any bar on a chart and think of that bar as your start point - bar (S). If the next two consecutive bars make lower lows than the previous bar then that is a swing down e.g. bar (1) has a lower low than bar (S) and bar (2) has a lower low then bar (1). If there are not two consecutive lower lows then it is not a swing point and you move to the next bar.

Just as in the example above you can see exactly the same thing with the swing down. Even though price made a few highs and lows it wasn't until bar (M) that you could mark bar (K) as the (S) point.

Only once we have clearly marker swing points can we go on to identify our support and resistance points.

Marking the support and resistance points using this method of first identifying the swing points will give you definite points on a chart from which to calculate your stops, limits and projections.

Please take some time to visit Mark and see his new project: SureFireTradingChallenge.com.

Let's face it... Forex is a market that has HUGE potential, HUGE liquidity, and little good information out there on how to trade it with success. That's why I've asked Mark McRae from Forex Avenger to come and teach us a bit about a 1-2-3 Method that his partner David Curran from Forex Avenger has had major success with. Please take time, read the blog entry, and visit Forex Avenger to see the success they have experienced trading forex!

This particular technique has been around for a long time and I first saw it used in the futures market. Since then I have seen traders using it on just about every market and when applied well, can give amazingly accurate entry levels.

Lets first start with the basic concept. During the course of any trend, either up or down, the market will form little peaks and valleys. see the chart below: 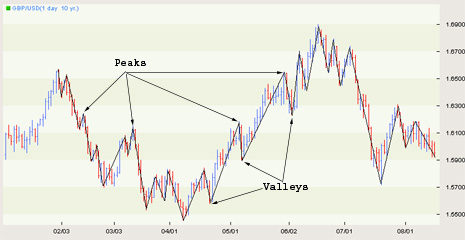 The problem is, how do you know when to enter the market and where do you get out. This is where the 1-2-3 method comes in. First let's look at a typical 1-2-3 set up: 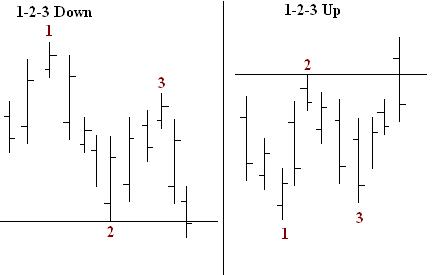 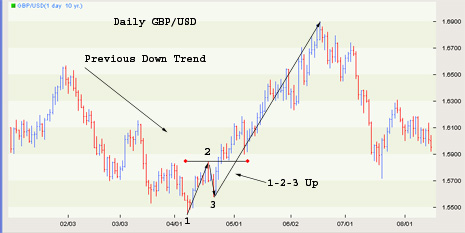 Nice and simple, but it still doesn't tell us if we should take the trade. For this we add an indictor. You could use just about any indicator with this method, but my preferred indicator is MACD with the standard settings of 12,26,9. With the indicator added, it now looks like this: 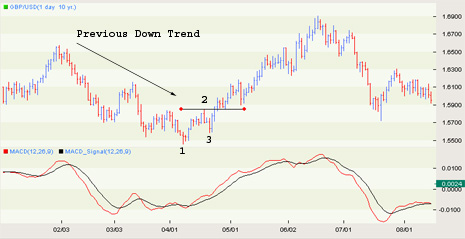 Now here is where it gets interesting. The rules for the trade are as follows:

The reverse is true for short trades. As the market progresses you can trail your stop to 1 pip below the most recent low (Valley in an uptrend). You can also use a break in a trend line as an exit. 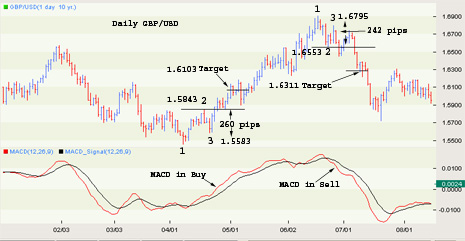 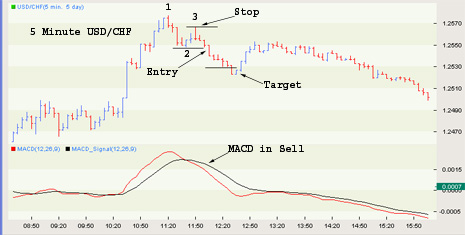 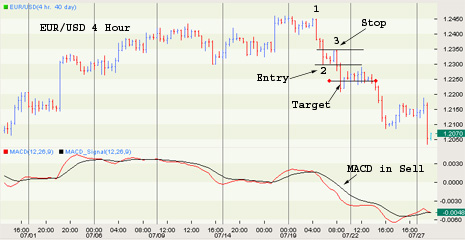 There are a lot of variations on the 1-2-3 setup but the basic concept is always the same. Try experimenting with it on your favorite time frame.

Bio - Mark McRae is a fulltime professional trader, author and coach. He has coached some of the top names in Forex trading. David Curran, Forex's latest rising star attributes his success in the Forex market to the teachings of Mark McRae. To read more about David, go HERE