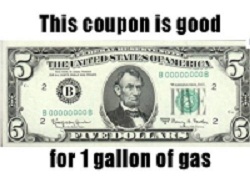 Consumers blame oil companies, oil companies blame the politicians, and the politicians blame foreign countries. Yes, we’re talking about the price of gas, or crude oil if you will. If you have been trading the black gold, you may be laughing all the way to the bank right now. However, the average American isn’t laughing at all. I think it's safe to say that no one likes to feel like they are being robbed at gunpoint every time they fill their tank.

As always, we would love to hear your thoughts, so be sure to share with us and all of our viewers in the comments section.